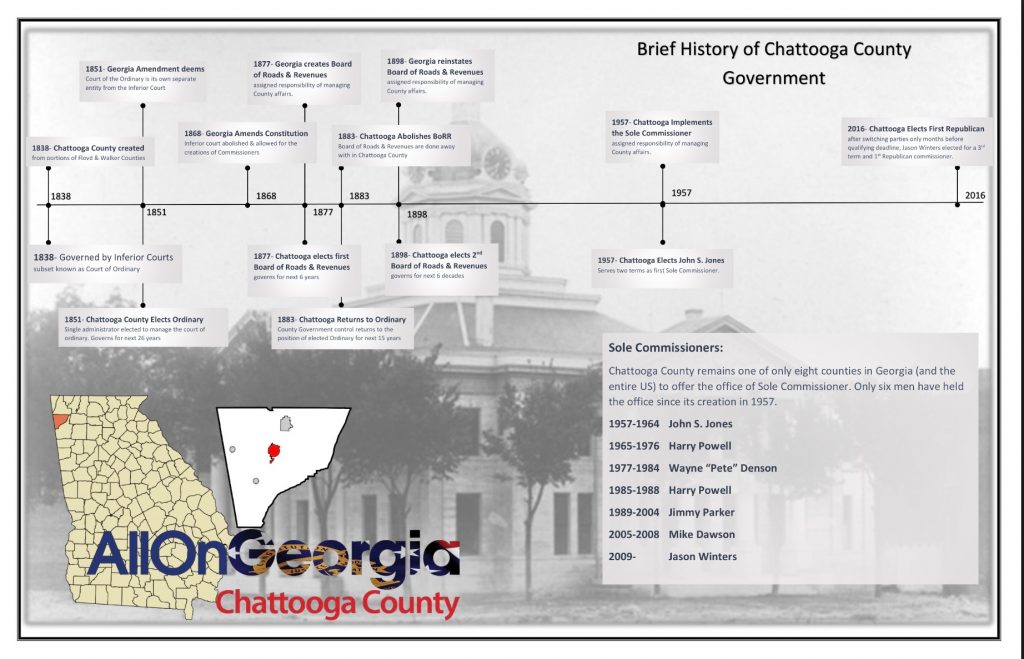 Since 1957, Chattooga County has been one of the few counties in the United States controlled by a single person, the Sole Commissioner. In fact, there are only eight counties in the entire United States that have a sole commissioner form of government. Interestingly all eight are in the state of Georgia.  As of 2016, there were 3,007 counties, 64 parishes, 18 organized boroughs, 11 census areas, 41 independent cities, and the District of Columbia for a total of 3,142 counties and county-equivalents in the United States, only eight of the 3,142 have a sole commissioner.

The Sole Commissioner is the chief legislative and executive government officer in the county. He literally runs the business of the county. He determines who sells to the County, who the County sells to, who gets contracts with the County, he decides which roads to repair, when to raise taxes, how much to raise taxes and how to spend the taxpayer’s money. The commissioner is also responsible for keeping the courthouse, jail, all county properties in good shape.

If enough people sign the petition, Brandon Gurley,  the chairman of the Chattooga County Democratic Party, says the issue will be on the next ballot for voters.

If you are interested in signing the petition, you can contact Mr. Baggett at 706-734-4010.  Ballots will also be placed throughout the community. In addition Mr. Baggett will be speaking at the Republican meeting this evening, Monday May 7th. The meeting begins at 6:30 p.m. at the senior Center in Summerville. Mr. Baggett will also be attending the City of Summerville meeting next Monday, Monday May 14th at 5 p.m. requesting use of the the park as a location for citizens to sign the petition.

There will be 100 copies of the petition handed out to people willing to gather signatures. Online petiton signing is not an option because the signatures must be physical signatures of registered voters verified by the Registrar’s Office.

How Did Chattooga End Up With a Sole Commissioner:

Origins of the Ordinary

In the founding days of Chattooga County, the General Assembly established Inferior Courts, comprised of five justices, that governed and, with it, the function of “court of the ordinary.” This body handled almost all duties not expressly given to the Superior Court, including the mundane administrative duties like marriage licenses, child custody, and the probate of wills and estates. In 1851, an amendment to the state’s constitution moved those powers from the inferior court to an entirely separate Court of the Ordinary which was administered by a single elected official known simply as… the Ordinary. The Ordinary was eventually renamed the Probate Judge.


The 1868 constitution completely abolished the inferior court and provided that “courts of ordinary shall have such powers in relation to roads, bridges, ferries, public buildings, paupers, county offices, county funds and taxes, and other matters, as shall be conferred on them by law.” However, for the first time, the changes also authorized the General Assembly to create county commissioners “in such counties as may require them, and to define their duties.” While Chattooga and all other counties were operated by Ordinaries in 1868, the very next year, counties began to adopt a Board of Commissioners. By 1877, a full half of Georgia Counties had elected to move on to the Board of Commissioners form of government. In Chattooga County, this was when the Board of Roads and Revenue was formed. The state didn’t set a firm number for the Boards but three seemed to be the most common number at the time. Within two years, Forsyth County was approved by the state for a one-man commissioner and the office of Sole Commissioner was born. For Chattooga, the Board continued in operation until 1883 when it abolished the board and reverted to the Ordinary before reinstating the Board again in 1898.

Six Decades of a Board

For the next 60 years, Chattooga operated with its Board of Roads & Revenues. The Board oversaw much of the growth of downtown Summerville and the expansion of roads and bridges throughout the county. The original two-story courthouse was replaced during this time when, in 1909, the current courthouse was constructed.

The County retained the board type of government until 1957 when the system was changed to a one-man commissioner.

Sole Commissioners have absolute power, this fact has been a thorn in the side of many of rural citizens who often feel like the combination of executive and legislative powers into the hands of a single person is simply too much authority to be fairly wielded. Power corrupts… Absolute Power corrupts absolutely.

When one man can think of a law, write the law, and enact the law, and order the enforcement of that law-all with the stroke of a pen- anything can happen. And, while supporters of the sole commissioner post, will argue that this power eliminates red tape and cuts down on “time,” detractors will argue back that the time saved is the very time used for oversight, checks and balances, due diligence and transparency that reduces corruption and provides equal opportunity.

The Dark Side of the Truth

The fact is, in Chattooga County, the sole commissioner post has only been held by six men. And, like every sole commissioner in the history of the state, all were white. This fact was the basis of a lawsuit when black voters sued Carroll County in 1984 on the grounds that the county’s switch to a sole commissioner in 1951, replacing the three-seat board of commissioners, was in violation of the Voting Rights Act. One of the sponsors of this bill was State Representative Willis Smith who, in 1947 as he pushed for the bill to reach the floor, said, “this is white man’s country, and we must keep it that way.” While the Georgia Court of Appeals found evidence in Smith’s words that the bill was an attempt to stifle the will of black voters, eventually the Supreme Court ruled in a similar case in Bleckley County in 1993 that the Constitution protected the “size of an elected body” thereby insulating the sole commissioner from further challenge with their 5-4 decision. Still, the challenge of discrimination caused most of the remaining counties to do away with the sole commissioner in favor of a board elected from districts.

Carroll County now is governed by a Board of Commissioners, the primary policy-making body of the county. The board consists of a full-time chairman and 6 part-time commissioners representing the different districts of the county. While the full commission retains ultimate executive responsibility, day-to-day executive duties are performed by the chairman. The chairman is elected countywide every 4 years. District commissioners are elected to staggered terms of 4 years each, with 3 of the 6 being elected by district every 2 years.

The Winds of Change Are Coming

While the process of changing the form of government in Chattooga County may be lengthy, it formally begins when a state official introduces a bill before the state legislature. What is required to motivate a state rep or senator to make such a move is still being debated, however, for Chattooga County, it may very well begin with a simple petition letting officials know that the will of the people shall not be ignored.