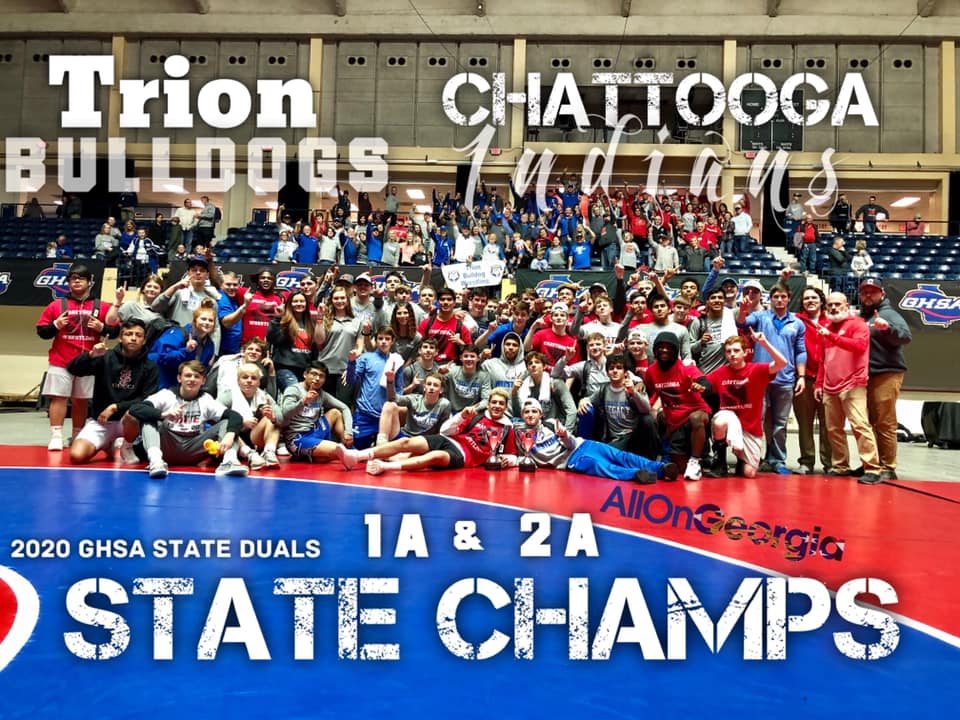 To say the upset was spectacular would be a massive understatement. Nestled in the Northwest Georgia mountains, the tiny county of Chattooga holds less than 26,000 residents and only two high schools. And while state championships of any kind have been very scarce in these mountains, both programs now boast state championship wrestling programs. And the residents back in their hometown made the wrestlers and coaches aware of just how proud they are.

The three-hour trek home from Macon was capped off by a two-mile long parade of supporters, led by law enforcement, several firetrucks, CERT vehicles, State Champ signs, and even a display of fireworks.

In the Class-A class, Trion spent the season hammering opponents in dual formats and open tournaments. Coach Eric Brock was confident of his wrestlers progress going into the Area Dual, which the Bulldogs won for a fourth consecutive season and delivered Coach Brock his 300th career dual win. In Macon, having reached the state finals last season only to fall to Commerce, the expectations were high for the Bulldogs in 2020 and nothing short of a title would be accepted.

Trion blew through the opening two rounds of the GHSA Dual Championship tournament, blowing out Landmark 66-6 before taking down a scrappy Mt Pisgah team 42-22 in the semifinals. Coming into the finals against Commerce, Brock knew that there were several favorable matchups but also knew several of his lead dogs needed bonus points to seal the win, and several of his guys facing the elite Commerce wrestlers would need to put up a serious fight to steal bonus points from the Tigers.

Beginning at the 220 weight class, Trion’s Alex Stewart did just that. Stewart lost the match but didn’t allow extra points for a Tech or a Fall. Spotting the Tigers a 4-0 lead, Clay Baker (285) immediately shut down any chance of Commerce getting momentum, scoring pin over Logan Crocker just 10 seconds into the second period.

Seth Huskins (106) and Daegen Vaughn (113) built on the early lead for Trion as Huskins outlasted Daniel Nash 8-7 and Vaughn jumped all over Caleb Lovin with a first period Fall. The 15-4 lead was a cushion as Trion’s Alonzo Francisco (120) faced Dawson Legg, a two-time state finalist and 2018 State Champion, who narrowed their score to 15-10 for the Tigers. At 126, Conner Deparlier defeated Kyle Hancock 7-5 to extend the score to 18-10 before newcomer Bryce James took the mat at 132 to take on two-time State Placer and last year’s Runner Up, Bryson Flynt. As a freshman, James finished Runner Up at 106 before exploding up to the 132 class and the boost in power came in handy as the stocky new Bulldog came through in a HUGE way for Trion. Not only did James steal bonus points from Commerce, he controlled the match from the initial whistle and scored a 2nd period pin to boost Trion to a 24-10 score and fire up his bench. At 138, Bowdon Brock was in control of Commerce’s Michael Sherman and came close to forcing overtime before Sherman slipped out the back and won with a last-second reversal 10-8.

With the score at 24-13, Commerce was facing a chance to swing the momentum back their way. But phenom freshman Logan Eller (145) had other plans. Eller dominated Collin Hall before closing his match with a 2nd-period pin and the 30-13 score now became a mountain for the Tigers to climb. Lincoln Maddux (152) has stolen dreams from Commerce wrestlers in the past and he did it again here. A crushing pin in the opening period over Thomas Trudnak left the Tiger bench deflated and David Paiz (160) put the final nail in the Commerce coffin with a 3rd-period pin over Lambdin Hardy.

The 42-13 lead was insurmountable with only three matches remaining but Baldyn Bowman (170) put an exclamation point on the win with a 13-4 Major over Braden Phillips. Commerce’s elite siblings Josh and Jake Frates both scored Falls over Trion’s Bo Jones and Brantley Wilbanks but the celebration was already in full swing on the Trion Bench and in the stands as the Bulldogs defeated the six-time Duals Champion Commerce Tigers, 46-25. Trion won nine weight classes, scoring bonus points in seven matches and picking up an astounding SIX pins on the Tigers. The win is the first State Dual title for the Bulldogs ever.

Meanwhile, on Mat 2, the Chattooga Indians were another David facing a Goliath of their own. The Social Circle Redskins had established control over the 2A classification in 2015 and rolled off 5 consecutive State Championships and felt confident that 2020 would be one more feather in their war bonnet. But Coach Brian Beasley had built a war party of his own and seemed confident that his Indians had more than enough for the Redskins to handle. Beasley stacked his early schedule with monster tournaments, including the McCallie Invitational, the Hook ‘em Holiday Clash, the Alexander Invitational, and Duals tournaments including the Lovett Lions Duals and the Vandergriff Duals in Chattanooga, TN.

The rough path hardened the Indians into the tip of the spear and the name Chattooga became known as the Indians finished in the Top 5 everywhere they went, including 3rd at McCallie, and multiple championships over much larger programs. Winning Area Duals for the first time in almost 20 years, Beasley knew this group had potential to take the next step in their Vision Quest season with a solid performance at the State Duals in Macon. And solid is precisely what the Indians were. Led by FIVE returning State Finalists, Chattooga put Bremen on the ropes quick with a 59-6 lead before forfeiting the remaining three matches to rest their squad. In the semifinals, a 45-27 victory over defending Runners Up, Elbert County, put the crowd on notice that this war party meant business. Social Circle advanced to the finals with a 43-27 win over Toombs County and the Redskins were ready to rumble in the finals.

Starting at the 220 weight class couldn’t have created a more perfect storm for Chattooga. Alex Mears 17-1 Tech Fall over Ben Bruce felt like a win for Social Circle but actually showed that the Redskins would need to find comfort in small moments as this was about to be a BIG day for the Indians. Luis Medina (285) built on the Mear’s lead with a quick pin over Rod Nunally and Chattooga was up 11-0. Lance Thacker scores the first points for the Redskins with a win at 106 over Chattooga’s Chandler Fowler but the next section of the lightweight highway became a dark tunnel for Social Circle.

Three-time State Champ, Griffin Jarrett (113) knocked off Will Atha with a first-period pin and two-time State Champ, Wes Conley (120), shocked the crowd by not only defeating the Redskin state finalist, but ending it with a pin in the third. With Chattooga up 23-6, Social Circle tried desperately to stop the bleeding with wins at 126 and 132, but Chattooga’s Timmy Robinson and Bayln Stephens made them work for it. Stephens made his match exciting and kept alive til the final whistle robbing the Redskins of three bonus points in his 13-6 loss.

Closing the gap to 23-15, the Redskins counted on a pin for Justin Ivy over Jason Malone (138) and a pin is what they got. Almost. Malone fought off his back in true Malone form as the feisty junior seized his moment in the spotlight. Trailing 5-0, Malone scored a reversal and immediately hooked Ivy to his back. As the seconds winded down in the opening period, Malone scored the Fall and rocked the Redskin hopes for a comeback.

With a 29-15 lead, Chattooga had a chance to close the door on Social Circle and that is what Mason Sterner (145) and Rowan Burdick (152) did. Sterner lured in Jacob Bergman, giving up a leg before wrapping up the Redskin into a Fall. Social Circle was still stunned as Burdick took the mat with animal ferocity. Bryan Rossi barely had time to shake hands before the attack was on. 34 seconds later, Burdick was getting his hand raised for a Fall and the Chattooga bench erupted in celebration. The 41-15 score was more than Social Circle could handle in the remaining matches but the War Party was far from over. Noah Cordle (160) fought hard against State Placer Will Hames before a pin closed the score to 41-21 for the Redskins.

The lights went out for Social Circle after that. The upper weight classes at Chattooga are a dark place for opposing wrestlers to be and Jakoby Cottrell (170), Devon Heroch (182), and Ty Veatch (195) each won by pin as the stunned Social Circle crowd looked on in confusion at the 59-21 final score.

Chattooga’s epic run at the State Duals concluded with the single best performance in the finals among all classifications. It was the Largest Margin of Victory (38 points), Most Points Scored (59), and Most Falls (9).

Of the 14 weight classes, Chattooga won TEN matches with a Tech Fall and NINE pins.
On the Chattooga line up, nine wrestlers went undefeated on the weekend:

The celebration in Chattooga County could last a very long time but, for the wrestlers in pursuit of more gold, there is still work to be done. Many of these athletes were back in the gym on Sunday in preparation for the Traditional State Championships. Where the duals championship focuses on what your program can do as a unit, the traditional tournament gives each athlete a chance to perform individually in a bracket of the best in the state at their own weight class. Last season, the Indians had FIVE State Placers and Four State Finalist who led the way for an overall 3rd Place team finish. Three returning seniors, Jarrett, Mears and Medina, were crowned State Champions and all three return this season to make a run at something even bigger for the Indians.

For the Bulldogs, a deep roster placed eight wrestlers and carried Trion to a 2nd Place Team finish last season. The Bulldogs have high hopes for some boys in blue to be competing for top gold in Macon on February 14th and that their Duals performance could mean big things at Traditional State.