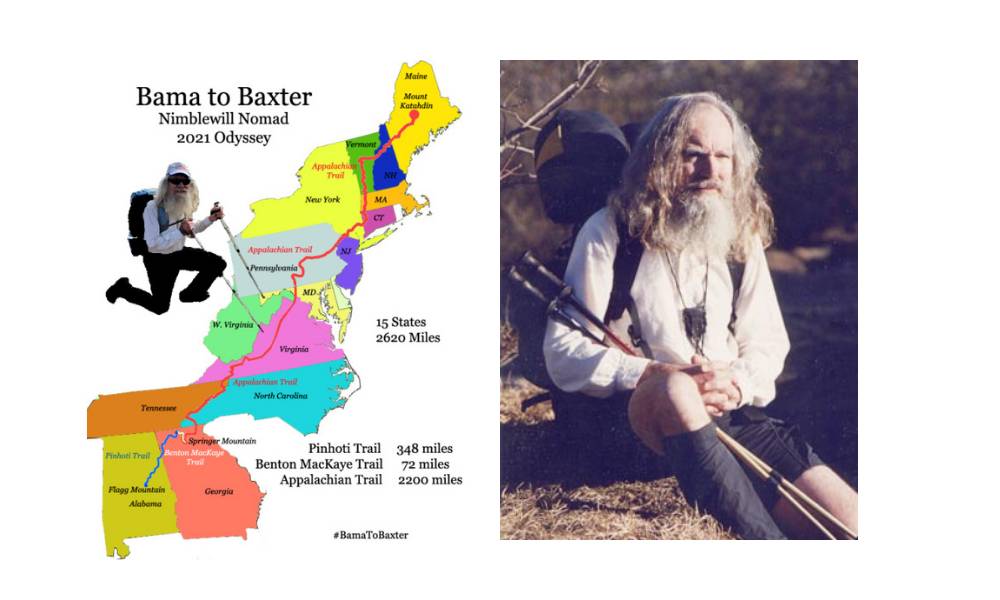 Meredith “Sunny” Eberhart has set out to be the oldest person to hike the Appalachian Trail.

The Appalachian Trail is 2,200 miles. Sunny started in Alabama at the southern terminus of the Pinhoti Trail, adding about 400 miles to his trip.

This is Sunny’s third time hiking the Trail. According to Sunny this year’s odyssey will be known as “Odyssey 2021 ‘Bama to Baxter – Hike On. This will be the ultimate journey in this old man’s life, one of body, mind and spirit.”

Adding the Pinhoti Trail to what he calls his “last, last time” hiking the Appalachian Trail allowed him to pass through Chattooga County on his way. He posted about his adventures at the Dollar Store, Burger Shack, and the Holland Store.

“As we arrive Holland’s Store–where we go for drinks snacks (and a short rest). The memory of this old store has stuck with me, as it’s changed little in

As any hiker on the trail, especially a seasoned-veteran, he knows there will be good days, and rainy days, fun days, and lonely days on his journey. “Gonna be another predictively unpredictable.”

Except the predictable critters of  course, there will be bugs, snakes, bears, mountain lions, wild cats, deer flies, and mosquitos.

“It’s not the snakes and the bears, it’s the damn mosquitos!” said Sunny.

But he said he feels good and is ready for the challenge. He says his secret to success on the hike was being able to hike 10 to 15 miles a day at 82.

Sunny is documenting his journey and everyone can follow along at nimblewillnomad.com.

Below is his journey through our neck of the woods. 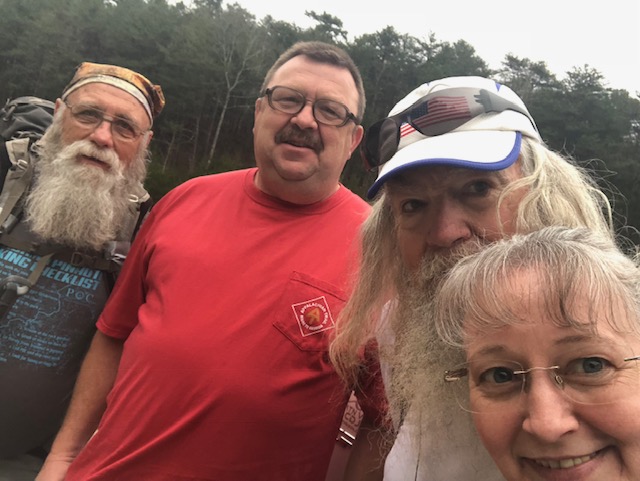 Tim & Donna Tate are long-distance hikers. On the trail they go by Hikernutt & Tagalong. They supported Rick Vagabond Rick Guhse when he hiked the Pinhoti Trail two decades ago. They’ve since remained friends–and now they’re friends of mine. Thanks, Vagabond, for getting us together!

A fine spaghetti dinner prepared by Donna last evening and a great night’s sleep–and Copperhead and me, we’re ready to hit 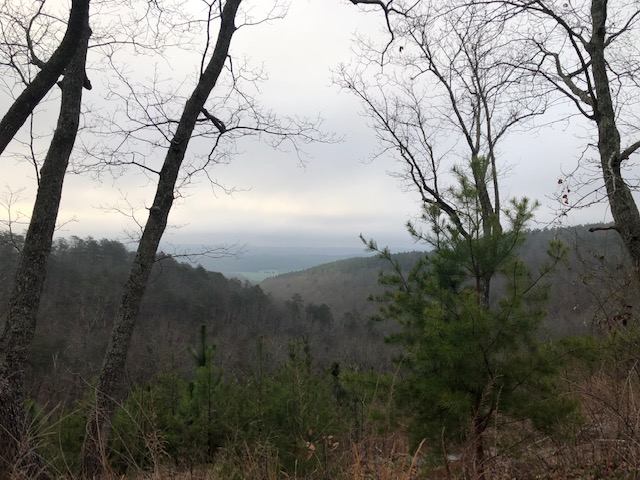 the trail again this morning. Tim and Donna get us to Mack White Gap and we’re hiking shortly after seven–makings of another great day on the Pinhoti Trail! 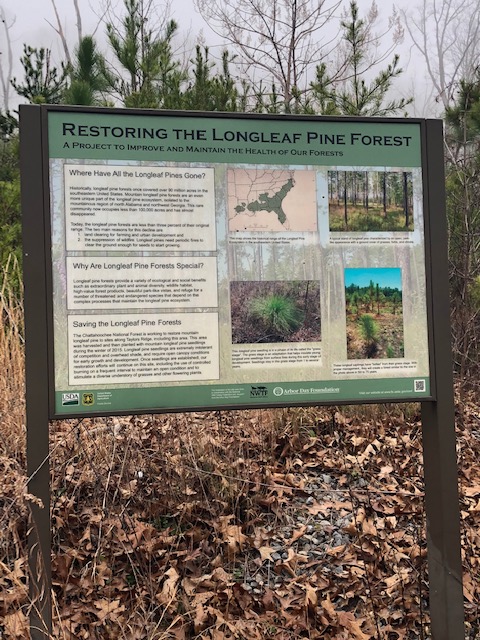 restoration/reforestation. We pause to read about “Restoring the Longleaf Pine Forest.” Very informative! Hopefully, you’ll be able to zoom in enough to read the longleaf story.

They got a later start, but being faster hikers (and as usual) Little John & Ryan soon catch us–and we hike the pleasant ridge walk

along Taylor Ridge together.

Everything is popping now. The serviceberry is in full bloom, the blackberries greening up.

Descending Taylor Ridge, we have a pleasant walk along rural Narrows

Heading back to the Tate home in Ringgold, we make a couple stops. One at the infamous Dollar General near Summerville where Dixie almost got arrested, then to everybody’s favorite place In Summerville, Burger Shack!

The vast longleaf pine forests of prehistoric North America will not return, but …conservationists hope that the current acreage can be maintained and possibly increased in the future.
(Robert Carter, Jacksonville State University)

Happy times, sad times–had to bid goodbye to Angela last evening, then this morning, as Tim drops Copperhead and me off at Highpoint Trailhead, it’s farewell to him. Plans are for them to meet up and hike some with me on up the trail, so I’ll take solace in those thoughts for now.

onto to the ridge beyond Highpoint. At the campsite near the old firetower we catch up with Ryan and Little John. They’re in the process of breaking camp as we pass and they soon come along to join us–and hike with us the remainder of the day. 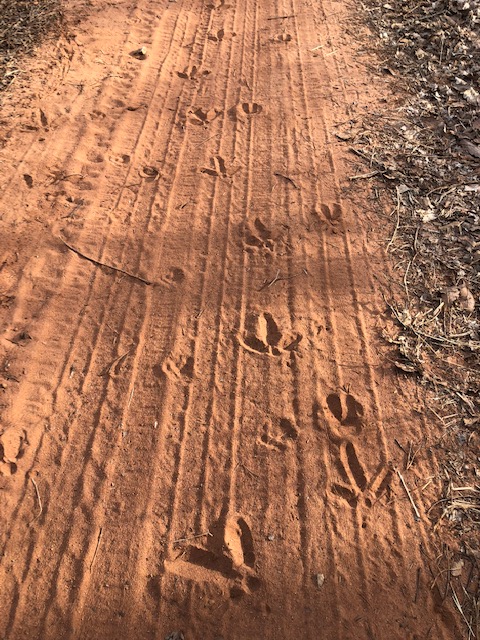 Copperhead, Little John, Ryan and I aren’t the only ones making tracks today. A segment of the trail passes along an old dirt road, and in the dirt are fresh turkey and deer tracks! So very appropriate, the turkey tracks. The word Pinhoti is Cherokee for Turkey Home. The symbol on the plastic Pinhoti Trail blaze is the turkey track!

A short break mid-morning, then we hike it on down to US-27 at Mack White Gap–and the end to this exceptionally fine day trekking the Georgia Pinhoti Trail!

Evening now, after dropping Ryan and Little John off at Coach Inn in Summerville, we continue on to Ringgold, where we’re the guests at the home of Tim and Donna Tate. 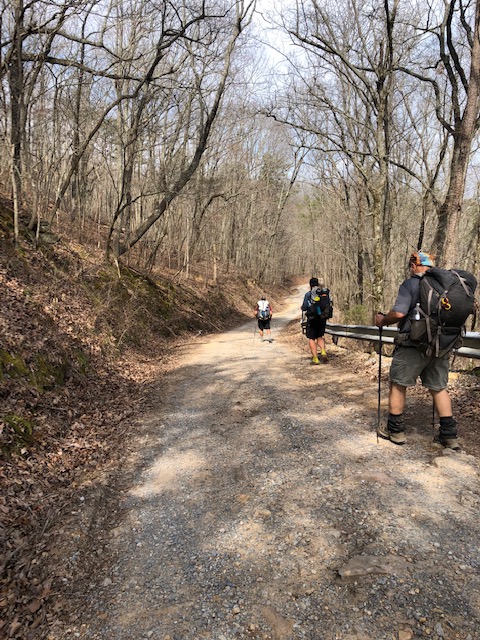 The Wanderlust has blest me in a ragged blanket curled,
I’ve watched the gulf of Heaven foam with stars;
I’ve walked with eyes wide open to the wonder of the world,
I’ve seen God’s flood of glory burst its bars.
(Robert Service) 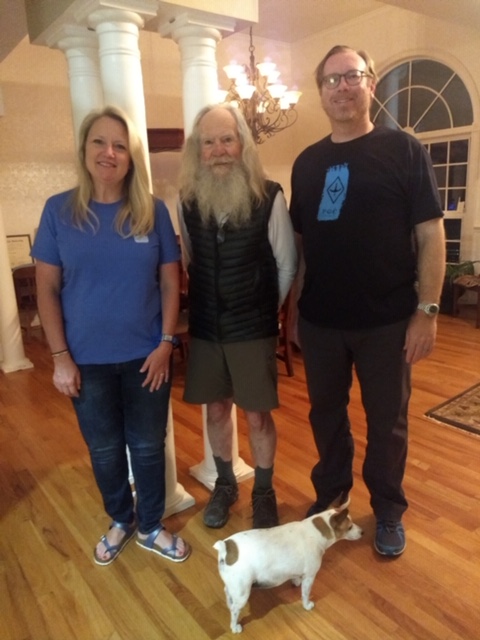 wonderful evening last, with Tim & Angela Groves in Rome. Gracious and kind hosts. A lovely, spacious home. I soaked my weary bones in their tub for the longest time. Then–Copperhead and I were served a delicious evening meal prepared by Angela. Don’t know how, but somehow I managed to stay awake to finish my journal entry.

Tim has an early meeting he needs to attend this morning, so the car shuffle is done and he’s got 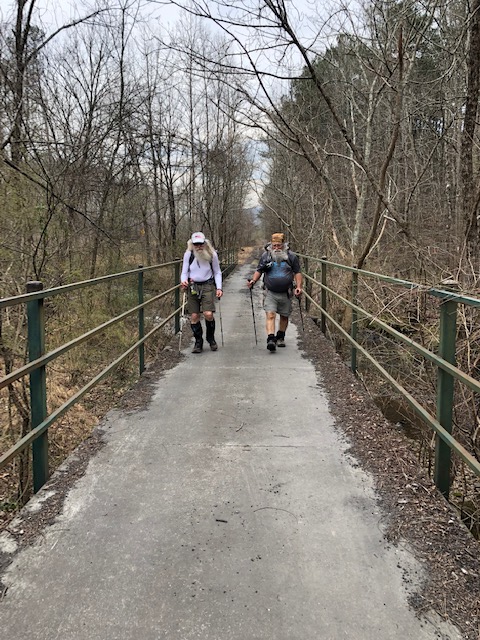 Copperhead and me back on trail shortly after seven.

Our hike today, just shy of 13 miles, will be pretty much flat and straight, along the old Simms Mountain Rail Trail. Little John camped near the trail last night, and as luck would have it, he’s just finished breaking camp, so he falls in with Copperhead and me–and we hike the day together. A bit cloudy, plus smoke from a nearby controlled burn, but we’re having a grand time and by late morning we’re well over halfway through the hike today, as we arrive Holland’s Store–where we go for drinks snacks (and a short rest). The memory of this old store has stuck with me, as it’s changed little in

With less than two miles to go to reach Highpoint Trailhead, the Pinhoti leaves the rail grade to follow along new cut trail. Little John has decided to hike on but Highpoint is it for this old intrepid and Copperhead.

Pizza for lunch, then it’s back to spend the night once more with Tim & Angela. Supper is on Copperhead and me, Downtown Rome. A mighty fine day

It is good to have an end to journey toward;
but it is the journey that matters, in the end.
(Ernest Hemingway)