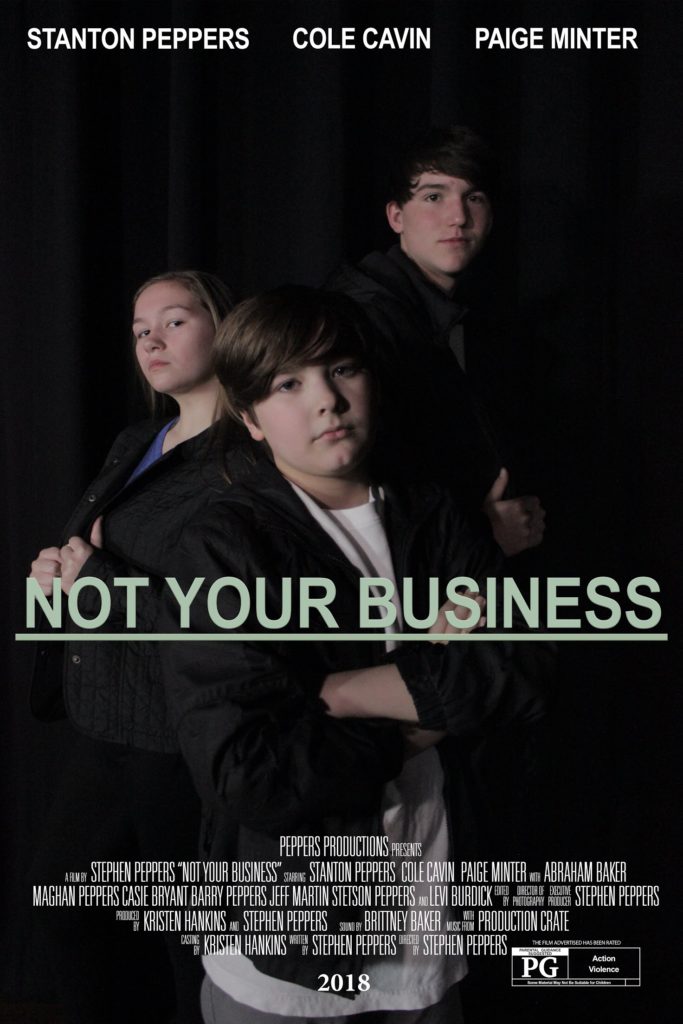 As Georgia continues its growth in the film and entertainment industry, more creative talent outside of the Atlanta “Loop” has gotten involved in the business of making movies. In 2017, Georgia became the top film location for big-budget films that drop over $100 million dollars into production. The industry has become a multi-billion dollar enterprise in Georgia and many young filmmakers are now garnering a little more support from family and friends who realize that investing in the creative process could be more than just a hobby.

In the northwest Georgia town of Summerville, one such creative young man has been making movies since he was eight years old and is now hosting the premiere of his first large-scale movie project, Not Your Business. Stephen Peppers is a home-school student who has taken on the role of writer, director, actor, and editor and has garnered quite a bit of support along the way.

AllOnGeorgia caught up with the 14-year-old, who has become quite the entrepreneur throughout the movie-making process and is now the president of Peppers Productions, to find out a little more about how he ended up in the movie business.

AOG: How long have you been involved in filmmaking?

I’ve been “making movies” since I was about 8 years old. I didn’t actually do it because I wanted to make movies, I just wanted to have fun with my friends. When I was 11 my best friend and I started a YouTube channel. This gave me an outlet for producing content. At age 12 I joined an online film school and began learning how to film professionally.

I am a huge Star Wars fan. One day I decided to watch the behind the scenes DVD. It amazed me completely. From then I’ve wanted to know “How did they do that?” and “How can I do that?”

AOG: Where did you the idea for the script?

I was in film school for about 3 months. I had learned a lot and used that information to enhance my YouTube videos. One day I decided that I should make a short film. For about 3 months I wrote Not Your Business. The script is a combination of my interests and dislikes. I love action movies and comedies, so why not make a movie with both? Some of this script has personal experiences, some of it was “what can I do within my abilities that would be awesome.

AOG What was the hardest part of making the movie?

Scheduling was the hardest part of the entire process. When you have 12 non-paid actors and a few crew members, scheduling conflicts will occur. We began shooting in September of 2017 and didn’t finish filming until June of 2018.

AOG: Tell me about your cast and your tagline for your movie

We have a truly amazing cast in Not Your Business. The 3 leads were amazing. Stanton Peppers, who happens to be my brother, plays Ben, he is a really complex character which makes pulling him off a tough job. Cole Cavin who plays John had never acted before. John is also a heavy role to take on, but Cole was dedicated and it shows in the movie. Paige Minter who plays Emma is an actor in Chattooga’s local theater. She pays so much attention to every character she plays to really nail the role. I am super proud of our entire cast and I cannot wait for everyone to see their amazing work.

AOG: What made you want to be a filmmaker

I love movies. I love seeing the finished product of hard work, but mostly I want to be a filmmaker because I believe it is a talent that God has given to me so I can share the Gospel through movies.

Peppers plans on continuing his growth and development in filmmaking by attending online classes and his on-the-job-training of actually making more short films. The red-carpet portion of his first premiere can be seen at The Church @Northside in the City room, on Thursday night 7 pm. Many of the cast and crew will be onhand for pictures and autographs and Peppers will be taking questions following the screening. For more information about attending the event, contact manager, Maghan Peppers or visit the event page on Facebook.