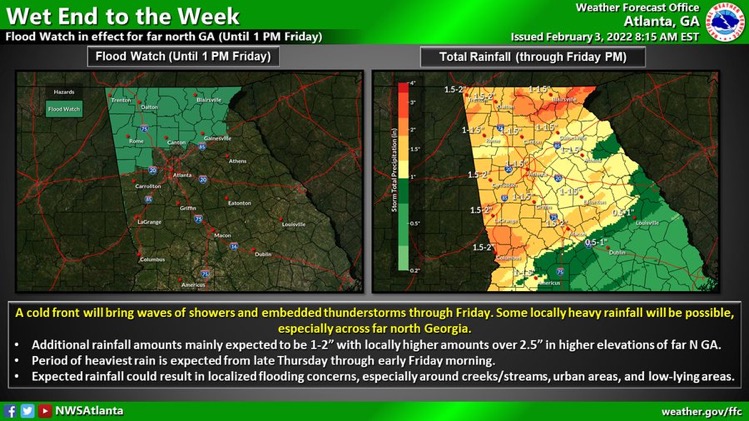 A Flood Watch remains in effect for much of north Georgia through Friday afternoon. Parts of the area have already seen over an inch of rainfall with additional amounts of 1-2″ expected through tomorrow with locally higher totals possible.

A wet end to the week is expected as a cold front brings showers and isolated thunderstorms to the area through late Friday. Rainfall totals are forecast to be 1-4 inches across much of the area, with locally higher amounts possible in far north Georgia. A Flood Watch is in effect for far north Georgia from 7 AM Thursday until 1 PM Friday, as expected rainfall may result in localized flooding concerns 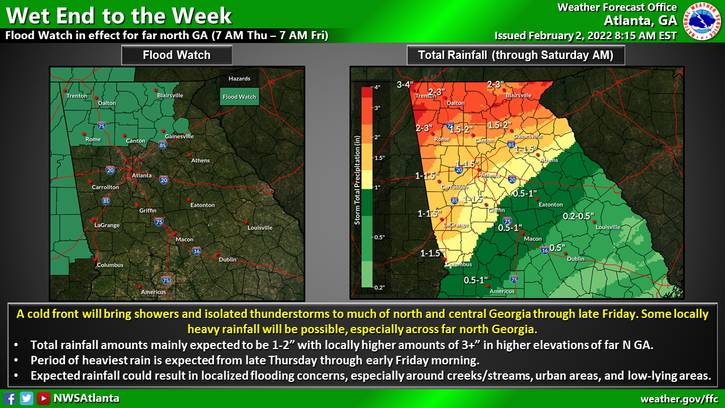 * WHAT…Flash flooding caused by excessive rainfall continues to be possible. *

* WHEN…From 7 AM EST this morning through Friday afternoon.

* IMPACTS…Excessive runoff may result in flooding of rivers, creeks, streams, and other low-lying and flood-prone locations.

* ADDITIONAL DETAILS… – Areas of heavy rainfall will move across portions of north Georgia today into Friday afternoon. Rainfall totals of one to two inches with locally higher amounts up to 4 inches are expected on near saturated grounds. Localized flash flooding and quick rises on creeks and streams will be possible. – http://www.weather.gov/safety/flood