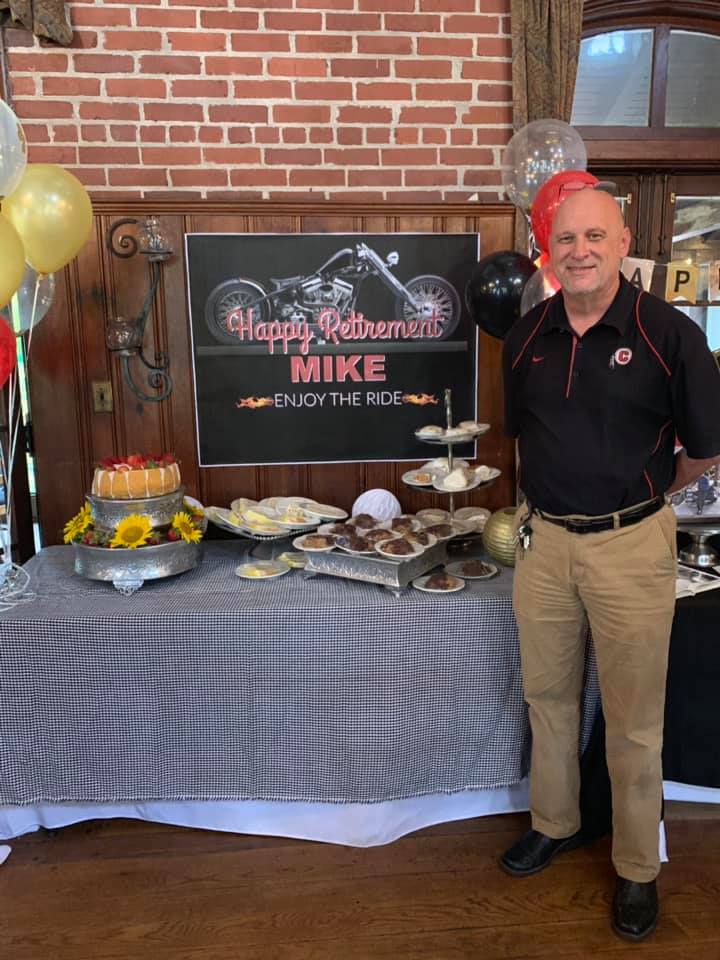 As the Summer of 2019 swings into the full heat of June, the Chattooga School System watches the retirement of yet another vital component in the education puzzle.
The Classroom Coach
Mr. Mike Martin is toasting his final day in the office, June 28th after 32 years of dedicated service to the schools of Chattooga County. Martin, a Chattooga Alumn himself, came on board in 1987 with Principal Jack Herring and AD Buddy Windle. While starting his career in the classroom teaching Social Studies, Martin has moved around the system contributing wherever his talents were needed.
Serving on the football coaching staffs of head coaches including Windle, Day, May, Miller, Jackson and Williams, Coach Martin was a long-time fixture on the Indian sidelines Fall after Fall. In the Winters, Martin was on the hardcourt as an assistant to Steve “Snake” Turner with the Boys Basketball team and led the Girls Team as Head Coach. Martin also spent time leading the Track team as head coach as well. And when Spring rolled around, he paced the dugout with coaches like Bennett and Steve Turner.
Administration
Martin moved from the classroom into the office at Summerville Middle School where he was an assistant Principal with Debbie Downer before eventually taking over as Principal, first at Summerville Middle School and then at Menlo School. Martin credits the academic coaches for their help and support when he was principal, specifically Carol Hosmer, Martha Templeton, Paula Buice, Jennifer Reece among others.

His career path eventually led him to the Superintendent’s office where Martin served as Director of Federal Programs until 2019. His wealth of experience and knowledge made Martin a valuable commodity for the past ten years when Superintendent Jimmy Lenderman relied heavily on Martin as a resource for nearly every educational matter the school system faced.

“Mike is one of the most knowledgeable individuals I know concerning the educational system.,” said retired Supt. Lenderman. “He’s the individual I always went to when I needed a level headed, well thought out, expert solution to a difficult problem.” Lenderman went on to acknowledge that what Martin brought to the table went far beyond the nuts and bolts of an education system. ” Mike is always positive, has a great sense of humor and is highly respected not only by educational professionals but by all that truly know him. He will be greatly missed but not forgotten by the Chattooga County School System family.” 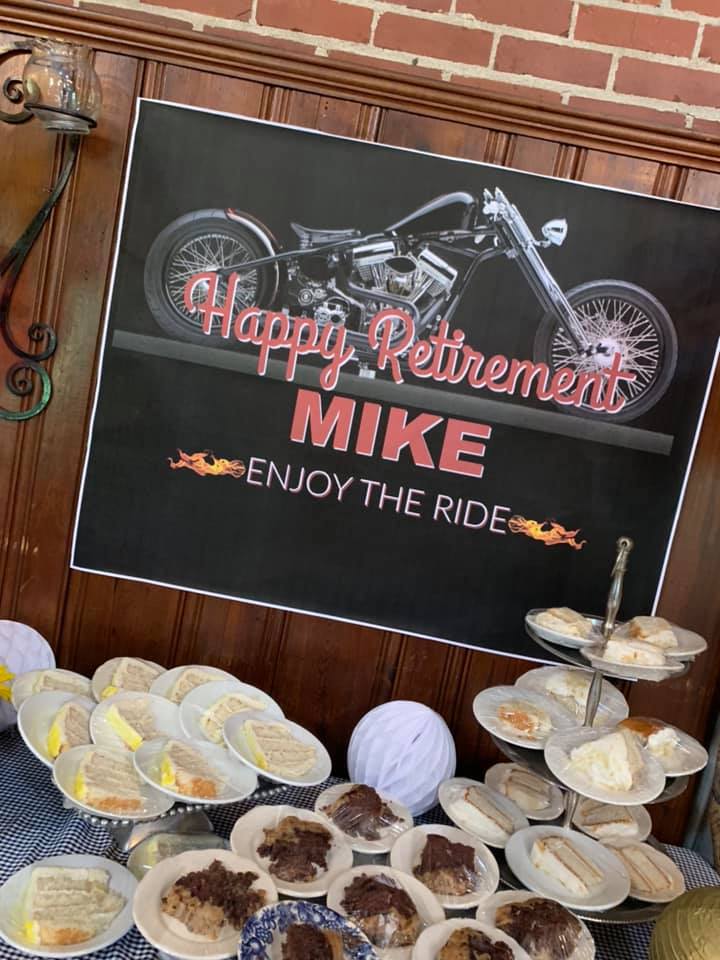 The Boy Behind the Man

Long before Mike Martin became one of the key players in revitalizing the Chattooga Schools, he was a boy who grew up in Chattooga and was deeply influenced by his own parents along with teachers who left an impression of the value of being an educator and contributing to solutions. “I have been a lucky fellow,” recalled Martin. “I was born in Floyd County and raised right here in Chattooga County so I had the distinct privilege to have had some of the most amazing and influential teachers that anyone could wish for.” Martin still refers to his own parents as “…the best and greatest parents any child could ever hope to have.” Beyond his own walls where Wallace and Ellen Martin shaped the minds of not one, but TWO future educators, administrators, and principals, Mike pointed to some early influences on his life from within the halls of Chattooga’s schools. “Ed Thompson was my elementary school principal and friend. He was responsible for (hiring) introducing me to the many others that would help shape me. Those amazing teachers included, but not limited to, Marcia Boney, Ms. Toles, Mrs. Thompson, Mrs. Hill, and many others that their names fail me at my advanced age.”

Martin knew that teaching was important even early on, but it was in high school that those influences would cement his own call to teach. “My High School years were equally as formative and fantastic,” said Martin. “I had legendary teachers like Mr. Ben Mosley, Steve Peppers, Skipper Stewart, Steve Hayes, Ron Williams, and Phyllis Payne.” So positive and influential were those people during that time in his life, Mike wistfully smiles and says, “I simply loved my high school years. I would go back and do it all again.”

For all of those who shaped and guided his life toward the profession of education, once into the halls of academia, Martin listed a handful of key mentors that molded his career and acted as advisors for portions of his 32-year journey. Those names read like a Whose Who of Chattooga education history;  Mr. David Jones, Mr. Melvin Mosley, Mr. Jack Herring, Mr. Jim Dean, Mr. Bill Bryant, Mr. Mitch Williams, Jim Lenderman, and Mr. Leroy Massey.
Stepping Back, Not Down
After living so much of his life focused around the schools and students of the Chattooga Community, Martin is looking forward to life beyond the schools more so than a life “without” those people and relationships. When asked about the timing for his retirement, Martin pondered before replying simply, “It is time.”
“I am retiring because it is time for me to step aside after 32 years. It is time for new leadership. It is time.”

In the face of the recent election and upheaval surrounding new board policies, Martin had nothing negative to say about the upcoming changes, stating, “I am a professional and I will carry out my professional duties until June 28, 2019.” Interim Superintendent Jared Hosmer has learned to rely on the wisdom of Martin as well. ” Mike has the ability to lighten any situation with his insight and his amazing sense of humor,” said Hosmer. “He is also very knowledgeable about school law and always has the well-being of students at the top of his list of concerns. I will miss having him around on a daily basis.” 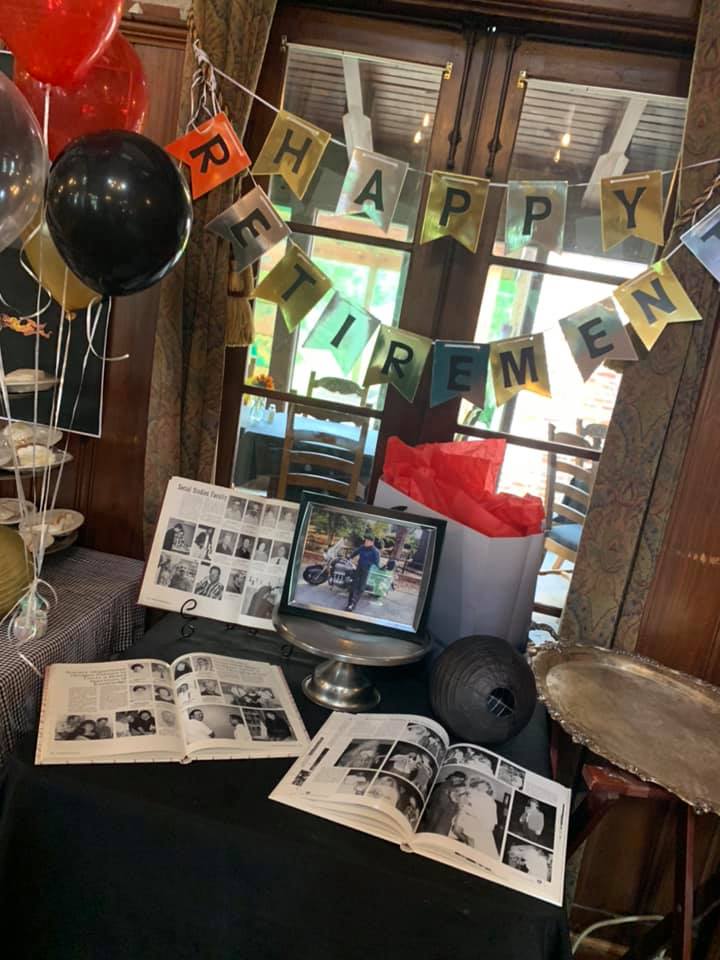 However, Martin will not be disappearing into the setting sun with his retirement days. He still holds high hopes for the school system and for the community. “My retirement wish is that this community as a whole would realize what an amazing job your school system is doing and that they would embrace it and encourage it. Sing its praises. Get involved with it at every level.” Martin has been in the system during some of it’s darkest days and has steadfastly maintained his optimism. Having seen the hard times, Martin knows the brilliance of the students and the dedication of the faculties. “Sadly, over my career, I have heard and read a lot of negative.,” said Martin. “The school system that I have known and still love is not deserving of such harsh criticism.”

Martin has walked the halls in every school and nearly every classroom and has witnessed the positive changes over the years. His voice brims with emotion as he points out what he views as the best parts of Chattooga. “It is a place where our children are shaped into adults. It is a place of honor it is a place of hard work and sacrifice by so many.  It is a place deserving of all our admiration and support. It is not perfect but many many people work towards that goal of perfection year after year. It is ONE TRIBE!” 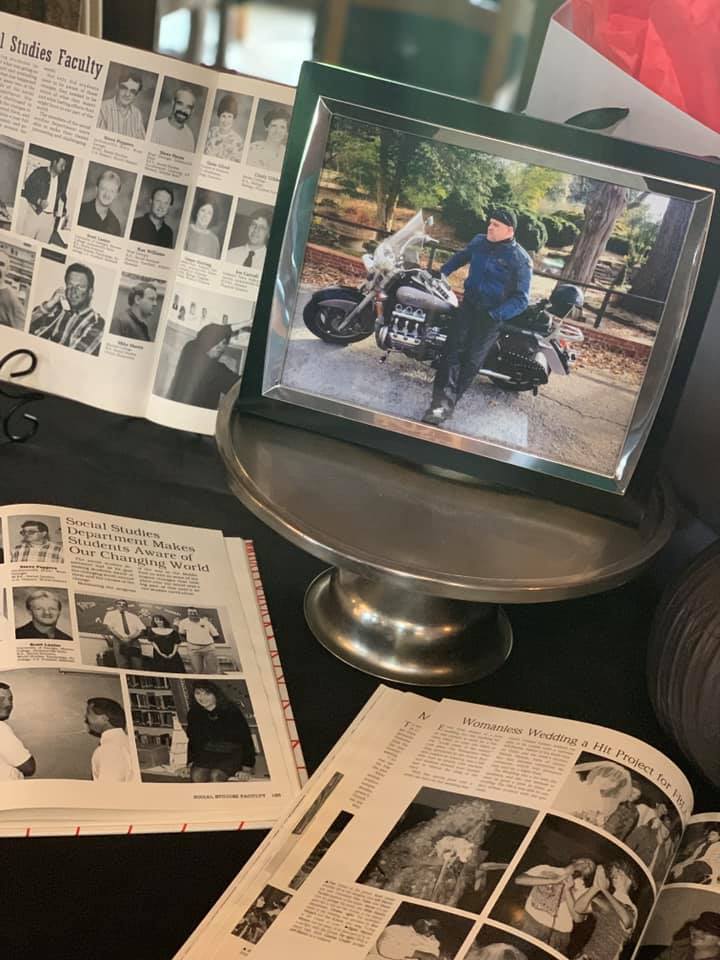 The Mike Martin Yearbook
After a career spanning three decades in education, it was only fitting to ask Mr. Martin to give us some yearbook-style moments about his career highlights and his future plans.
Favorite memories:
Every day in the classroom with kids.
Friday night Football games
Feeling like you were making a difference for children
Watching children transform into productive adults
Fun memories:
Guarding the ref
Giving valentines day cards to Mitch from Bill and to Bill from Mitch
All the good times (win or lose) with all my fellow coaches. (Steve Turner, Preston Cash, Jim Day, Ron Williams, Buddy Windel, Mike Miller)Retirement Plans:
Do a little fishing
Ride My motorcycle
Find a part-time job for pocket money…lol
Watch my two boys grow up
Work some at Sweet P’s

1. Teachers(highly skilled)
2. Parent Involvement (active, not passive)
3. A system of pressure(principal) and support(success team) to facilitate academic growth
From all of us at AllOnGeorgia, Happy Retirement Mr. Martin.