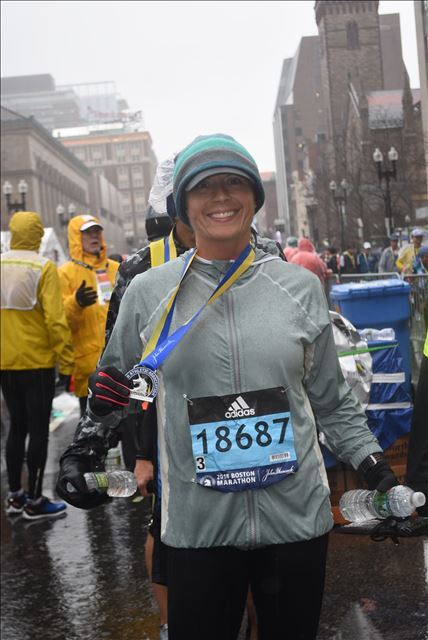 THE BOSTON MARATHON
The history of the Boston Marathon has become iconic and is written in every individual journey that it takes to get there. From the starting line on Main Street in Hopkinton… and the 26.2 miles to Boylston Street and the finish line in Copley Square in Boston. 2018 marked the 122nd running of America’s oldest marathon and marked a personal milestone for one teacher from Chattooga High School who has taken her passion for running to the pinnacle of the sport.
Renee Beasley has been a teacher and track coach for several years. But she has been running for as long as she can remember. Like many runners, she began with shorter races but the competitive edge in her blood (her brother is a world champion bull rider) drove her to longer and longer distances. Beasley began training for her first marathon ten years ago and, after she completed the 2008 Myrtle Beach event in South Carolina, she immediately knew that she wanted to run in Boston with the best runners in the world.

GETTING THERE
But the Boston Marathon is not an amateur event and requires minimum qualifying times based on gender and age. “At that time, I needed to run 3:40 or better. It took me three more races before I reached that goal,” said Beasley. On her fourth try, Beasley ran a 3:37 time (3 hours and 37 minutes) in Las Vegas but, by the time she flew home to enter her registration for Boston, the event was completely full. “My heart was broken.” Adding to the heartbreak, officials for the Boston Athletic Association, the organizing body for the Boston Marathon, changed the qualifying requirements again for the following year. For the next few years, Beasley continued running and chasing Boston. “Since that race, I have had 5 Boston Qualifying times. For the 2017 race, I submitted a time and missed the cut off by 2 minutes,” recalled Renee. The sheer will power developed by thousands of miles in training runs kept her focused on her goal and, in July of 2017, Beasley went all the way to North Bend, Washington to run the Jack and Jill Downhill marathon, chasing one more shot at Boston. This time, her PR time of 3:34 was more than 10 minutes faster than the minimum required time for her division. “I knew that would definitely get me in!” remembered Beasley. On registration day, Renee was quick to submit but, then… came the wait. For someone whose life had been about action, the waiting was excruciating. A race the size of the Boston Marathon limits the participants to a carefully selected 30,000 and the competition to get in is as fierce as the race itself. “The Boston Athletic Association hand checks every entry and narrows the list by age and gender,” said Beasley. For the track coach and teacher, her commitment finally paid off. “It took about a month before I received notification that I had made it. I was so excited to finally get to run this race I have been working towards for 10 years!!!”
PREPARING TO RUN WITH THE BEST
While Renee had been running several marathons per year, the grueling training regime would only get tougher in the months leading up to Boston. Her will would be tested. “In training, I follow a program designed by Hal Higdon. I have been very successful in using his plans. I typically run 3 marathons a year and usually train 14 weeks leading up to the race (sometimes fewer depending on how close the races are).” Throughout the process, Beasley would run 5-8 miles per day with strategic “long runs” scattered at key points to allow for muscles to build up and then recover. The long runs range from 10 miles to 20 miles and the body must be cared for like a finely tuned machine. Beasley explained, “…you gradually increase your weekly mileage to reduce risk of injury. My peak weeks I will average 50-60 miles a week. The most I will run on a long run is 20 miles and I usually do these 2 or 3 times in training. After 20 miles, the body needs more time to recover so it is suggested not to run more when training. Some marathon runners do, but I stick to 20.” Mixed into the precise regime is hill runs and track work.
RACE WEEK
As the days closed in for race day, Beasley and her family prepared for the trip. The excitement was palpable, and Renee needed to stay completely focused. “I flew out to Boston on Friday morning with my husband, Ellie [Beasley’s freshman daughter], and my step daughter Jenna,” said Beasley. “Ellie has asked for 10 years to go to Boston to cheer for me when I run.” The first step was acquiring her race number. Official numbers are a coveted item and become the single biggest piece of memorabilia for runners. Identification is required to pick up your number which is assigned based on gender, age and qualifying time. “When I got my official race number, I was so thrilled, and it finally felt real that I was actually going to run in The Boston Marathon!!!” With her number in hand, the reality of the moment began settling into her mind. As the family visited key spots for the race, the history of the race began to settle into her heart.

Renee remembers the days leading up to the race, “… we visited the starting line in Hopkinton, Harvard University and the Finish line on Boylston St. in Boston.” The 2018 race was also a milestone for runners as it marked the 5th anniversary of the bombings that shook the nation in 2013. The race took on new meaning and significance for America and the term Boston Strong became a mantra for all those who earned the right to wear a number and compete.
RUNNERS TAKE YOUR MARK
On the day of the race, Beasley said goodbye to her family, who would take up cheering spots throughout the course, and boarded a bus to “athlete village.” Renee recalls the size of the area, “It was set up with huge tents with bagels, water, bananas, and coffee. We had to arrive early so the area was packed with thousands of runners trying to stay warm and dry.” On top of the nervous energy coursing through the area, mother nature seemed determined to make this race even more difficult as temperatures plunged below 40 degrees, making this the coldest Boston Marathon in over three decades. “The temp was 38-40 degrees, pouring rain, and 20-30 mph winds. It was cold!!! Some runners dropped out due to the weather conditions.”
Because of the sheer number of bodies flooding the roadways for the race, officials have developed a wave assignment approach to stagger the runners based on ability. This keeps a more efficient flow and reduces the swarms of elite runners from trying to fight through crowds of “slower” runners, which could create dangerous scenarios. Beasley soon found out that nothing keeps Boston from coming out to support the runners. “Despite the rain and cold and wind, the race was amazing. From Hopkinton to Boston there were thousands of people along the route cheering for us! Boston really shows up on Marathon Monday no matter what the conditions!!”

FINISH LINE
The race course itself is not easy. Major hills are found deep into the race (between 17-21 miles) that threaten the will of even the best racers. For Beasley, all the pain was worth it once she made the turn onto Boylston Street. “When I made the last turn onto Boylston and saw the finish line, the runners high kicked in and nothing could stop me from crossing that line!!! All the training and years of trying to qualify was worth that moment of a little pain!” said Beasley. Adding to her moment of joy, was the presence of family cheering her on at the finish. “I was blessed to have some of my family there cheering for me and supporting me. I am also very thankful for the support and encouraging messages from all of my family and friends!!”
Beasley isn’t finished just yet. “I hope that I get the opportunity to run this Epic event again!!” Her goals continue to grow with each achievement. Beasley’s next goal? “My long-term goal is to run a marathon in every state by the time I’m 50. If I continue to run three a year, I should hit that goal!!”
For those keeping track, Beasley didn’t just finish the race, she clocked in at 3:55 which placed her in the top 1,000 in her division. That is the top thousand female runners in the world. In addition, Renee was the 14th fastest Georgia runner in her division and she placed in the top half of ALL RUNNERS in the Boston Marathon!

2018 AND BEYOND
For a world-class runner, there are no breaks. Beasley’s goal chasing starts right now. “This year, I plan to run Indiana in September and I was lucky enough to have my name drawn for the New York City Marathon on Nov 4!!!” Renee takes care of her body and trains hard to do what she does, but she doesn’t take anything for granted. “I am truly blessed and thankful that I am able to run. Running is my therapy. I hope to continue until I’m 90.”
Renee became part of a very elite group of people to run and complete the Boston Marathon, but that is far from her only accomplishment. This race marked her 25th marathon in 23 different states. The staggering amount of running to train for and complete 25 marathons defies comprehension. And Beasley still makes time back home in Chattooga for her own crew of runners. The Indians just competed in their region championship and continue to grow as a team. With a leader who “runs the run”, they don’t have to look very far for inspiration.
“I want to be a positive role model for my own children, the athletes that I coach and students that I teach. No matter who you are or where you come from, dedication, determination and hard work will pay off and you can achieve anything!!!”