A Big Stage for a Small Town: Renovations at Tooga Theater Bring Hurdles for Summer Shows 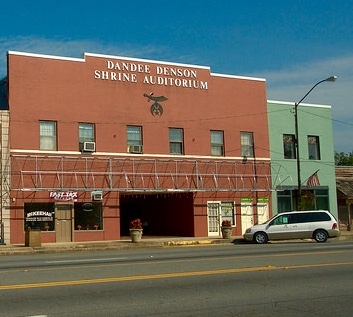 Recently, AllOnGeorgia received a Letter to the Editor that shined a spotlight on a county resource that has proven its worth in the past few years. The theater in downtown Summerville, formerly known as the Dandee Denson Shrine Auditorium, and now again called the Tooga Theater, its original name, was purchased by the county in 2015 and has been utilized for Town Hall meetings, political debates, concerts, beauty pageants, fashion shows, comedians, girls nights out and a host of other community functions. However, the author of this particular Letter to the Editor issued a call to action on the theater’s pending renovations on behalf of it’s role in servicing the local youth drama programs.

My Name is Stephen Peppers. I am a local filmmaker and child actor. One of the things I do in the summer is act for Chattooga Curtain Call. I have performed in 5 plays, including:The Little Mermaid, Xanadu, Singing in the Rain, Beauty and the Beast and more. I have always enjoyed performing for them.

We perform in the Tooga Theater which is supposed to be under renovation right now.  Notice I said, “supposed to be”. The original plan was for the theater to be finished for the summer play. All the “renovation” that has been done is pulling down the curtains. It appears that the project has been put on the back burner and isn’t going to see the light soon.

I think this project should be of high priority. Every year, around forty students are signed up to perform in the summer shows, and there are many younger kids signing up too. Due to the theater not being finished, the shows are being moved to the Boys and Girls Club. The space is much smaller than the theater and as a result, the younger kids won’t be able to participate this year.  The Tooga Theater seats 300 and sells out almost every show. The smaller space not only affects the actors, but the hundreds of people who look forward to coming to see the shows.

The theater also has three other shows besides the summer shows. Two for younger kids and one for middle school and up. This not only gives more opportunity for the students who like to act, but it generates more ticket sales for the theater. Plus, the younger kids can’t participate this summer, and now they can’t in the winter or spring. Trion elementary school also does a musical for the 5th graders, but they will have to relocate due to the theater being closed.  So really this affects everyone.

If the theater gets put back in the spotlight, there will be more opportunity for the kids and teenagers of Chattooga county. Sports aren’t the only thing that we can do. So please consider actually renovating the theater.

After following up with Chattooga County officials, the following updates on the theater renovation were made available.

According to County Clerk Martha Tucker, “some demolition has been started. We are waiting on the final architectural design. The Commissioner says it will reopen sometime in 2019.”

The county was originally able to purchase the theater through a grant from the Appalachian Regional Commission. This federal/state partnership funds projects throughout the 13-state Appalachian area with grants designed to boost specific distressed areas with economic development.

A multi-use fully functional theater is a huge asset to any community and can become the epicenter of a downtown area, with many business opportunities and economic advantages. The theater can, and has been, utilized for countless community events and functions and made available for lease to private organizations when not in use for county events.

Over the past two years alone, over 1,500 tickets have been sold for five shows performed at the theater. The cast has been around forty for each show. With the planned renovations supposedly underway, the summer 2018 production has suffered a significant loss in casting opportunities due to a temporary move to the Boys & Girls Club facility, which is considerably smaller for the stage and audience.

For the past two summer productions, students from every school in the county, as well as home-schooled students, have participated in the productions. According to organizers of the plays, a quick look around the parking areas would provide a glimpse of the geographical draw the shows can generate. “If you were to patrol parking for our shows, you would find license plates from six different states. We bring business and exposure to our county.” says one event coordinator.

The wider implications for these shows can be illustrated by the explosion of growth across the state in the film industry of Georgia. The past decade has witnessed a shift in the entertainment industry as leaders in Georgia have passed incentives designed to encourage production companies to bring films to Atlanta and the outlying areas. As much as 30% tax credits offered for films and television shows in production in Georgia have slowly caught the attention of studios in Hollywood and New York. While neighboring states like South Carolina and Louisiana have offered similar tax credits, it is Georgia’s consistent and long-term commitment to bringing this industry into the state that have turned the film and television into a billion dollar industry and made Georgia the #1 location in big budget movies. As post production facilities join the filming crews here in Georgia, more and more high tech jobs are added to the over 30,000 new jobs generated from film.

Stephen Peppers, the author of the letter to the editor is in the final stages of editing his first movie starring local children actors. He, like the cast and crew and family members of the cast and crew would love to have a red carpet premiere at the theater, perhaps in the future this will be possible not only for Stephen but for all future filmmakers.