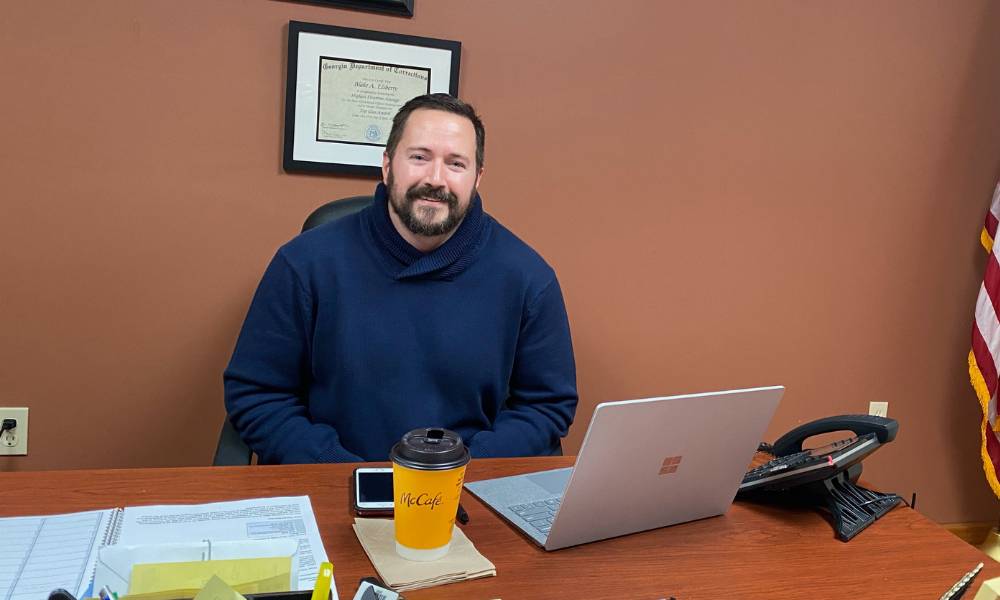 Blake Elsberry campaigned with the promise of public meetings, and he is making good on the campaign promise.

On Saturday morning, March 27, Commissioner Elsberry hosted his first public meeting, “Coffee with the Commissioner” at the Civic Center. Attending the meeting were department heads and other elected officials. The thinking behind the informal meeting was that if citizens had an issue with a certain department they could directly speak to the person in charge in a more relaxed environment, as opposed to getting on an agenda to speak at a formal government meeting.

Elsberry said the meeting took on a fellowship type atmosphere as around 30-40 people attended, many people in attendance had not been out since the COVID pandemic started. He plans to hold a public meeting every three months.

Reactions from elected officials in attendance:

Chief Magistrate Tracy Maddux: I think it’s a great idea and the format allowed direct interaction with multiple representatives of county government. The folks I spoke with were very positive with several saying it was their first time out since COVID.

Clerk of Court Kim James: I believe the informal setting put people at ease to ask questions and make comments specific to their needs and concerns.  I hope that these meetings will catch on and more people will stop by and participate.

Tax Commissioner Joy Hampton:  I was happy to see so many attending the meeting, and glad that Blake invited me. I thought the informal atmosphere was a good idea. Citizens were able to bring issues to the appropriate department heads, and get answers to their questions or contact information for the person(s) that could help. After going through all that COVID brought us last year, it was refreshing to mingle with the other department heads and citizens. I’m looking forward to the next one.

Probate Judge Gary Woods: I thought the meeting went well. I was pleased with the turnout.

Department Heads in attendance at the meeting included:

At the meeting Commissioner Elsberry provided a detailed list of what he has accomplished during first three months in office.

Negotiated contract for environmental monitoring of closed landfill saving $68,000 over the next 4 years.

Made adjustments to staff, including restructuring of public works director’s position and minimizing overtime, saving roughly $20,000+.

Wrote the business management plan for completion of the 2014 ARC grant for beginning theater restorations.

Initiated monthly meetings with the other county elected officials to facilitate communication and address intradepartmental topics.

Addressed equipment issues in the public works department to be able to more effectively and efficiently respond to road and ditch requests.

Acquired insurance claim for damaged courthouse roof to be replaced.

Reappointed Betty Brady to the board of tax assessors.

Appointed Deb Stowe to the Lookout Mountain Community Services Board.

Declared the month of March Red Cross month in honor of their 140th anniversary.

Signed Broadband Ordinance into effect to help with the county’s ability to apply for broadband funding.

Updated the Joint Comprehensive Plan so that the county can take advantage of funding and grants for the next 5 years.

With the help of Cindy Mcgraw, started the committee for the first annual Chattooga River Festival. Tentatively to be held in April 2022.

Initiated an Approved Upon Procedures outside financial review.

Went to the capital and had meetings with Governor Kemp, Senator Mullis, Rep. Eddie Lumsden, Kevin Shea (president of GEDA), and Christopher Nunn (commissioner of GDCA) discussing the needs and issues facing our county. And additionally met Senate majority leaders.