Georgia Southern University’s planned convocation center will be named in honor of the late Senator Jack Hill and his wife of 46 years, Ruth Ann Hill. 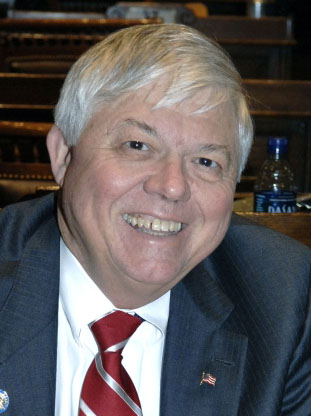 With University System of Georgia approval Tuesday, Georgia Southern University’s planned convocation center in Statesboro will be named in honor of the late Senator Jack Hill and his wife of 46 years, Ruth Ann Hill. Both are Georgia Southern graduates.

The Jack and Ruth Ann Hill Convocation Center will be the signature building on Georgia Southern’s south campus. It will be located on university-owned land on the southwest side of the intersection of Lanier Drive and Veterans Memorial Parkway (US 301 bypass).

“This will be a tremendous addition to our Statesboro campus, for our local community, and for our students,” said Georgia Southern President Kyle Marrero. “We are grateful to the Governor and the Legislature for supporting this project, which will be a permanent reminder of the generational impact made by Jack and Ruth Ann Hill.”

A prominent resident of Reidsville, Jack Hill (‘66) was the longest serving Georgia senator when he died in April 2020. He was a senator for 30 years, serving as chairman of several crucial committees, including Appropriations, which has broad jurisdiction over legislation involving budgeting and spending state and federal funds. With Hill’s support, Georgia Southern reached new heights as an institution serving the southeast region and the state of Georgia. Hill was instrumental in helping the University expand its programs and build several new state-of-the-art facilities, including the Engineering and Research Building, which opened for classes in January 2021.

His wife of 48 years, Ruth Ann, focused her life on public education and retired as principal of Reidsville Elementary School. She was a triple Eagle, earning degrees from Georgia Southern in 1973, 1990 and 1991.
“Together, Ruth Ann and Senator Hill left an indelible mark on this institution, southeast Georgia and the state,” Marrero said. “I am very proud to be part of the effort to recognize and honor these special alumni and public servants.”

Funding for the project will come from a combination of state and privately raised funds. Gov. Brian Kemp’s Fiscal Year 2022 budget recommendations to the General Assembly include more than $12 million for construction.

Final designs and a groundbreaking schedule will be completed once funding has been secured.