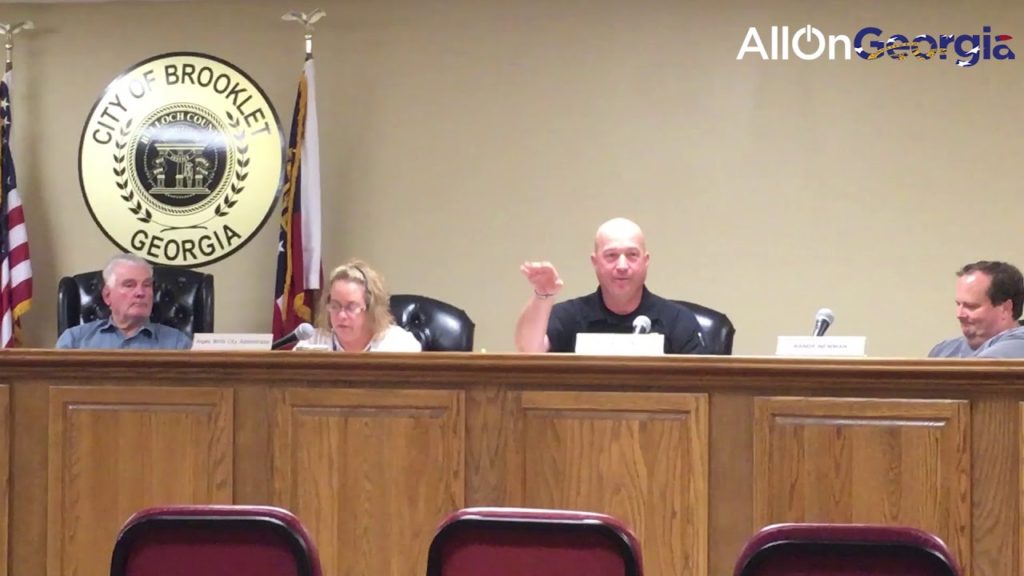 The following article is Part 4 of an investigative series by AllOnGeorgia into the Brooklet Police Department under the authority of Former Police Chief Doug Meyer (also known as Max Meyer & Clifford Meyer). The series looks into Internal Affairs investigation reports, a series of body camera files, and details over a dozen incidents during Meyer’s tenure in which citizens allege harassment, retaliation, and false imprisonment by Meyer and a few of his officers. All documents contained in the article below were obtained by way of an Open Records Request filed on May 29, 2018.

Part 1 — Fmr Chief in Brooklet acknowledged citing business owner for speaking out against PD
Part 2 — VIDEO: Fmr. Brooklet Chief to Motorist: ‘I’m going to work to get you fired’ during speeding-related traffic stop

Paperwork obtained in an Open Records Request shows that the Brooklet City Council altered their disciplinary actions against officers no longer employed with the Brooklet Police Department, even after a series of complaints came to light and internal affairs investigations showed wrongdoing.

An Internal Affairs investigation was launched after two cell phone videos showing an altercation with a woman named Cindy Lee and employees of the Brooklet Police Department — Officer Charles Dutton, Sgt. John Baker and then-Chief Doug Meyer — went viral. The Brooklet City Council, in February 2018, appointed Effingham County Sheriff’s Office deputy Brian Mundy as the interim chief in Brooklet. Mundy was to serve as head of the police department until a permanent chief was found and he was responsible for the launch of the Internal Affairs Investigations.

Dutton was found to have violated the following Brooklet PD policies:

For the policy violations cited above and the criminal violations cited below, Dutton was given a (5) day unpaid suspension and a 6-month probation period. The IA investigation was placed in his personnel file.

The letter issued to him is below:


Baker was found to have violated the following Brooklet PD policies:

Baker was placed on leave until the council voted on his termination after a discussion of the IA reports in Executive Session.

The letter to him is below:


As noted, the final report also indicated that Sgt. Baker made “an unlawful traffic stop” and the documents indicate that the stop was a criminal violation, specifically OCGA 16-5-42 — “False imprisonment under color of legal process.” Because Officer Dutton, though off-duty, arrived on the scene of the traffic stop and participated, his letter also indicates a criminal violation of OCGA 16-5-42 as well.

Baker was also noted for possibly violating a second code section, O.C.G.A. 16-11-37 Terroristic Threats and Act. Per the report, “Due to the fact that this is an unlawful detention, when Mrs. Lee starts her car and says she is going to leave, Sgt. Baker says “Okay, pull away and you will be charged!”

Investigators who conduct IA investigations are not charged with giving Council a recommendation on a course of action. The disciplinary measures taken were done by votes of the Mayor and Council. Council upheld the suspension of Dutton and termination of Baker. Meyer had already resigned before these other personnel changes.

But they didn’t stick.

In the case of Doug Meyer, who was previously said to have ‘resigned in lieu of termination,’ Councilman Bill Griffith pressed interim Chief Brian Mundy to change the classification with the Peace Officers Standards and Training Council (POST). When paperwork is filed for ‘resignation in lieu of termination,’ POST automatically begins its own investigation. After learning of the investigation by POST, Griffith instructed Mundy to change the classification to “retired.” Mundy did so at the request of Griffith and that letter is below.


The Council also backtracked on the status of Baker’s termination.  From the letter Interim Chief Mundy sent to POST:

“Baker filed an appeal to the termination under the city policy. The appeal was to take place in the next city council meeting however, prior to the meeting, Baker and his legal representation met with the city attorney, Hugh Hunter and an agreement was made to allow Baker to submit his resignation. Unbeknownst to me, the city council met and agreed to accept his resignation. After being informed of the council’s decision, I was instructed to submit a change of status for Baker to Resignation in Lieu of Termination. I understand that this in no way will affect the status of the current POST investigation into his initial termination.”

The letter in its entirety is below:


After failing to find a satisfactory candidate for a permanent chief, the Council, at the May council meeting, chose not to extend the coverage by Interim Chief Brian Mundy who has worked to reform the police department over the last four months and instead appointed Officer Lee Craft as Interim Chief, effective June 1.

Mundy submitted a letter to Mayor William Hendrix on the final day of his employment, June 1, 2018:

Please accept this letter as my official notice of resignation. It has been a pleasure being back in Brooklet and having the ability to interact with the citizens, but I must admit that I am leaving with an unaccomplished feeling. It was my hope that in my short time here that I would be able to start the building process in repairing the trust and respect that has been lost. This has had an effect on me in a negative way, and I feel burdened with the knowledge that I am leaving with unfinished business that needs to be taken care of.

My resignation is effective immediately upon acceptance of this letter.
Again, thank you for the opportunity that you’ve provided.
Sincerely,
Brian A. Mundy”

Open Records Requests also drew out a video of Councilman Bill Griffith on a phone call with Cindy Lee. After Lee was told to leave City Hall while trying to file a complaint against the PD, she contacted Griffith, who is over the police department. Griffith notified Lee that their call and her explanation of the complaint was being recorded and Meyer whispered “Put it on speaker,” which Griffith did. The entire call was captured on the body camera of Meyer and Griffith took instruction from Meyer during the call.

Sgt. Baker arrived at the police department to listen to the call about one minute into Cindy Lee explaining her complaint to Councilman Griffith. As she detailed her experience, Baker – who does not appear to be on-duty – can be seen making faces about her statements and mouthing words to Meyer.

Griffith proceeded to explain the actions of the officers before telling Lee she should go to City Hall for a complaint form. Lee explained that she was concerned about returning to city hall – as she had previously been told to leave in a heated exchange with Meyer – and Griffith told her to come to city hall and “we will go from there.” When she said she was scared, Sgt. Baker can be seen laughing.

Griffith told Lee if she drove to city hall, he would walk the form outside to her, per Meyer’s instructions to him during the call. Cindy Lee then said she felt the call was a “wasted call.”

The video of the call is available here.

The body camera was turned off when the call ended.

Lee was told to pick up a complaint form from the Mayor’s business in town. Griffith sent an officer to deliver that form to Lee. Lee did later officially file her complaint.

The complete Internal Affairs Investigation report is below.

The video below was obtained through Open Records Request with the City of Brooklet. It has not been clipped for time by AllOnGeorgia, but shows the few minutes leading up to the previously released video circulating on Facebook.