It was anything but ‘business as usual’ Thursday evening at the Brooklet City Council meeting where local officials convened for their first meeting of 2020 and the first gathering for official business since the turnover to the new administration. 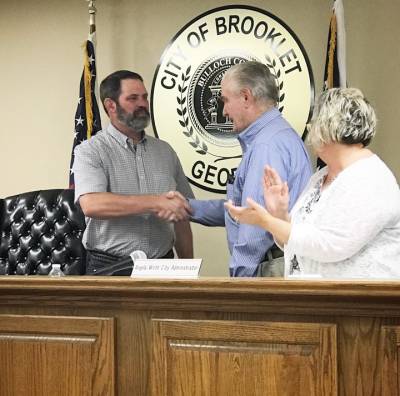 It was anything but ‘business as usual’ Thursday evening at the Brooklet City Council meeting where local officials convened for their first meeting of 2020 and the first gathering for official business since the turnover to the new administration.

The City of Brooklet has a new mayor at the helm and two new council members, all of whom were sworn in last week. Mayor Joe Grooms III and City Councilmen Nicky Gwinnette and Brad Anderson joined tenured council members Jim Stanoff, Bill Griffith, and Greg Schlierf to discuss a number of issues Thursday. With the exception of procedural appointments and the consideration of financial statements, however, most business was tabled until February to allow the new elected officials to become acquainted with city operations before making decisions on spending and contracts.

As officials tried to sort out unfinished business from the previous administration, a handful of new policy and procedure stipulations were noted by the new administration as to how they would like to see business conducted.

Mayor Grooms was adamant that both he and council would operate within the spending limitations set forth by the city charter, which dictates that the mayor may not spend more than $1,000 without council approval and any one council member may not spend more than $500 without full council approval. The discussion came about after it was revealed that former Councilman Randy Newman approved a $970 contract overage for a vendor at the community center without council approval. Former Mayor Bill Hendrix was in the room and said he didn’t know anything about it. City Clerk Angela Wirth said city employees did not know the payment to the vendor was over the contract amount until after it was paid.

Grooms apologized profusely to those in the room, saying: “I made a promise to this town that we would spend their money very wisely and when I see $900 go out for changes and it didn’t come back in front of council, and I’m sure that upsets taxpayers and I happen to be one of them. I’m sorry. That’s unacceptable. It’s unacceptable that these fine people that voted us into these slots for us to do that…I’m sorry for it. I apologize to you.”

Councilman Schlierf said there are still loopholes that need to be closed because things are being signed without council approval.

Councilman Brad Anderson also asked that a copy of any letter sent out by anyone with the city be retained by the city clerk after it was discovered that a letter was sent out by Randy Newman to a vendor, but no one had a copy of what the letter said.

Council also tabled an initiative to refinish the concrete under the pavilion at the Randy Newman Community Center because former Councilman Randy Newman was going to obtain different bids from different companies after they were improperly and incomparably submitted while he was still in office. There was no mention as to why Newman was still overseeing the project.

The city has no outstanding debts and council members spent considerable time discussing how they plan to replace the concrete asbestos water lines over the next several years – an initiative everyone but Griffith mentioned was a top priority for their term.

Grooms also asked that financial statements be prepared more simply, suggesting consolidation on a single page, in hopes that the finances would be easy for anyone from the public to digest and understand without much analysis.

Council members were assigned to serve as liaisons to the respective departments as follows:

Council also went into executive session for approximately 35 minutes for the purposes of discussing personnel matters, but no action was taken. The meeting adjourned at 9:47 p.m.