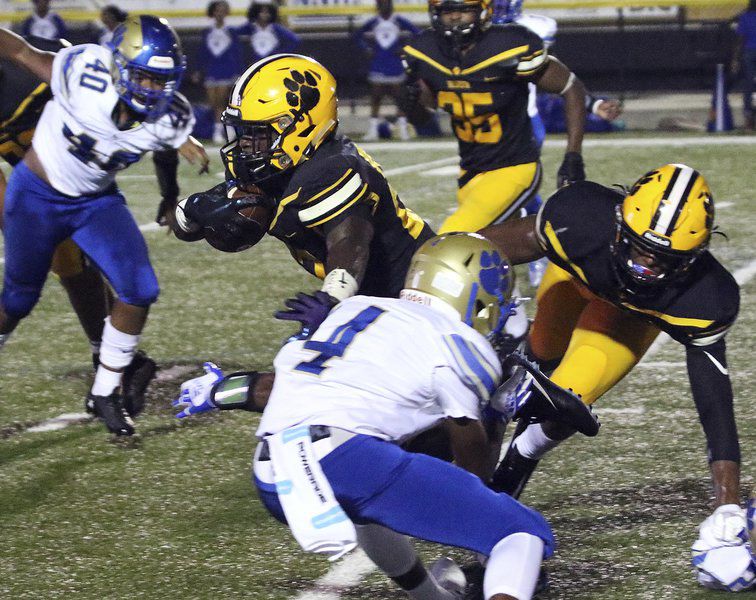 The Wayne County Yellow Jackets eked out a 23-21 victory Friday night over Richmond Hill in their home opener at Jaycee Stadium in Jesup.

The deciding score came on a safety when the Jackets dropped the Richmond Hill quarterback in the end zone for a sack and two points.

The game was a matchup between two teams ranked in the Southeast Georgia High School Football Power Poll. The Jackets (2-0) entered the week as the top-rated team while the Wildcats (1-1) were seventh.

The Jackets opened the scoring with an 8-yard run by Ashby Cribb before the Widcats answered with a 70-yard scoring jaunt by standout Aaron Bedgood who lined up at quarterback on the play.

Wayne would go up 13-7 on an MJ Fuller run, but the Jackets missed the point-after kick.

The Wildcats would take a 14-13 advantage into intermission with a 1-yard run by Bedgood.

Bedgood would strike again for Richmond Hill when he returned the second-half kickoff 75 yards to put his team up 21-13.

A gamble by the Wildcats midway through the third quarter led to a Wayne touchdown and two-point conversion to tie the score 21-all. Richmond Hill went for a first down on fourth-and-1 from its own 10-yard line, but the Jackets stuffed the play to take over on downs.

Three plays later, Fuller scored from 3 yards before the Jackets converted their two-point try to pull even.

Neither team scored until the safety by the Jackets in the fourth quarter.

Bedgood finished with 16 carries for 107 yards for the Wildcats in the losing effort.

The Gators lost for the first time in three games as they fell to the Trojans at Memorial Stadium in Waycross.

The Gators (2-1) came into the rivalry matchup as the No. 8 team in the Class 5A state poll while the Trojans (3-0) were ranked second in the Class 6A ratings.

The game is billed annually as the Border War and a trophy is given each season to the winner. This was the 47th meeting between the teams. Coffee has now won the last two matchups with the Gators.

The Wildcats scored early and often Friday night at Chris Gilman Stadium to pick up their second win of the season.

The Wildcats finished with 470 total yards.

Locust Grove (1-2) had scored over 40 points in each of its first two games. The visitors finished with 394 yards, but could score only twice against the Wildcats.

All of the scoring was done in the first three quarters.

Camden’s Jordan Billups blocked a field goal and a punt and also intercepted a pass in the win.

The Wildcats will travel to Richmond Hill next week.

The loss was the first of the season for the Indians who were 2-0 on the young season after victories over Frederica Academy and Brantley County in the season’s first two weeks.

Charlton was the fourth-ranked team in the Southeast Georgia power rankings coming into the week.

The Wildcats scored on their first six possessions Friday to roll past the Tigers at Bazemore-Hyder Stadium in Valdosta.

Kevin Harris, a running back who is committed to South Carolina, did not play for Bradwell, which finished with only 104 total yards and just 24 on the ground.

The Panthers suffered the road loss at Womack Field after winning their opener last week 40-17 over rival Bradwell at Olvey Vield in Hinesville.

Statesboro is now 2-0. The Blue Devils won their opener at Greenbrier by a 7-3 score a week ago with a strong defensive effort.

The Devils put together another strong game Friday against Liberty which came into the contest ranked third in the Southeast Georgia power poll.

The Panthers lost their quarterback, Dionte Bowens, to an apparent knee injury in the second quarter and he did not return the rest of the game.

Kris Coleman, who rushed for 351 yards last week, scored the only touchdown for the Panthers on a 55-yard run in the second quarter.

The Bears moved to 3-0 with their shutout of the Bulldogs from Savannah on Friday night in Blackshear.

The shutout was the second in a row for Pierce which blanked Bacon County 49-0 last week. The Bears won their opener 48-14 at McIntosh County Academy two weeks ago.

The team’s starting defense has not allowed a single point in three games.

Pierce finished with 345 yards to just 39 by the Bulldogs.

For the Bears, John Jones carried 13 times for 112 yards and three touchdowns that covered 3, 3 and 10 yards.

Jermaine Brewton was 7-of-12 passing for 117 yards and two touchdowns. He teamed with Jones for a 7-yard TD pass in the first quarter and hit Parker Peagler from 17 yards for another score also before halftime.

The fourth quarter was played with a running clock. Greg Benefield kicked a 22-yard field goal for the Bears to close out the scoring late in the game.

The Herons came up short at Atkinson County Friday night in the non-region game played in Pearson.

The Herons will go into their third game next week at Jeff Davis looking to get first-year head coach Geoff Cannon his first win as a varsity head coach. Cannon is a former assistant at Glynn Academy, Frederica Academy and Allatoona.