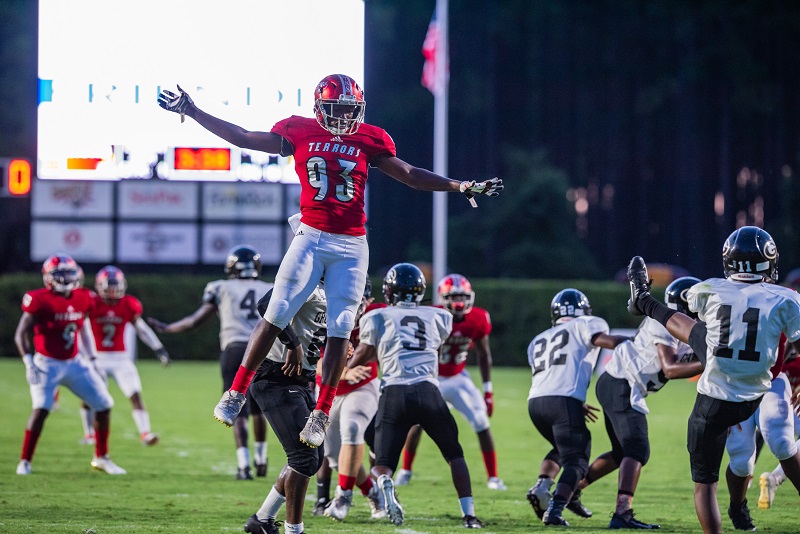 The Glynn Academy Red Terrors raced to a 49-0 victory Friday night at Glynn County Stadium in their non-region game against Groves.

That was actually the halftime score, but the game was called shortly after Glynn named its Homecoming king and queen due to a lightening storm that would have caused a delay while keeping the Red Terrors and Rebels in their locker rooms.

Had the second half been played, it would have been played under a running clock if both teams agreed to that under the state’s 30-point mercy rule. A running clock is mandatory in the fourth quarter if either team holds a 30-point lead.

“We treated this as a work day for us. We wanted to come out and work on some things,” said GA coach Rocky Hidalgo.

“Once I saw them on tape Sunday, I had kind of been dreading this game. I don’t like to rub people’s nose in it. I really don’t, and I didn’t want to end up on the front cover of USA Today for scoring 100 points. And to be honest with you, I’m not sure we could have avoided that tonight even with the twos and threes playing.”

The Terrors (2-1) ran roughshod over the hapless Rebels (0-2) who gave up 77 points last week in a loss to Effingham. Glynn rushed for 334 yards in the 24 minutes of action and gained 365 total yards in the half.

Senior slotback Quantavious Bostic had a big two quarters for Glynn, running for 135 yards and three touchdowns on just six carries. Bostic scored on a 6-yard run before showing off his track speed on gallops of 40 and 58 yards for his second and third TDs of the night.

Also for Glynn, Sam Wagner scored the team’s first touchdown from 26 yards on a reverse before TJ Lewis, the sophomore quarterback, scored on a 14-yard keeper for the second touchdown.

Following back-to-back scores by Bostic, Lewis passed to Wagner who tossed the ball to offensive lineman Shane Wells on a flea-flicker play that went for a 17-yard score.

Mike Brinson – Caden Hutchinson holds onto the ball following his touchdown run for Glynn Academy in their win over Groves on Friday.

Bostic then added his third touchdown on the 58-yard burst before Caden Hutchenson reeled off a 13-yard scoring run late in the second quarter to finish off a 7-play, 50-yard drive by Glynn.

The Terrors did lose the ball on a fumble during a punt return and also a fumble following a reception.

Groves did not pick up a first down until the 7:37 mark of the second quarter on a 10-yard pass play. The Rebels had minus-20 yards rushing and 19 passing yards to finish the half with minus-1 total net yards.

“Our kids showed up and took care of business,” Hidalgo said. “I thought they played hard, but we didn’t get a lot of push back from Groves, honestly. We played a ton of kids, and got down to ninth-graders on defense in the second quarter.”

The Pirates took out their early-season frustrations on the Buccaneers Friday night in Darien as they rolled to their first win of the 2018 season.

“Overall, I thought we played well,” said BHS coach Sean Pender. “The kids played hard, and we needed to get that first win.”

The game was the third straight on the road for Brunswick which opened the year with losses at Coffee and Bartram Trail (Fla.), two teams that played for state championships last season.

The loss was the second straight to start the season for the rebuilding Bucs (0-2) who opened their schedule two weeks ago with a home loss to Pierce County.

The Pirates jumped ahead 21-0 over the Bucs in the first quarter and led 28-0 at halftime. Getting a lot of players in the game after that, the Pirates outscored the Bucs 21-7 in the final two periods.

KJ Lee enjoyed a good night for the Pirates. He ran for a 73-yard touchdown and also threw a pair of touchdown passes.

Anthony Mountain, who was expected to split time with Lee at quarterback early on, saw his first action of the season as he returned from a knee injury. He also threw a touchdown pass.

Jaylen Trimmings ran for a BHS touchdown as did Che Foy.

McIntosh’s only score came in the third quarter following a Brunswick fumble which gave the Bucs the ball with a short field and they took advantage by scoring a touchdown.

With several players carrying the ball, the Pirates finished with 278 yards rushing on 37 attempts.

The Pirates are off next week, giving them two weeks to prepare for the first home game of the season on Sept. 14 against Camden County.

The Knights made history Friday night against the Bulldogs, winning for the first time against a Georgia High School Association opponent.

Lanier (0-2) plays in the GHSA Class A public school division while Frederica is a member of the Georgia Independent School Association.

Last year, the Knights (1-2) lost at Wesleyan in their first ever game against a public-school opponent. Frederica opened the season with a loss at home to Charlton Count, a ranked team that plays in the same region with Lanier County.

Frederica, playing without several starters including all-stars Jaylin Simpson and Jashawn Sheffield, bolted out to a 21-6 lead at intermission on an Isaiah Jackson touchdown run, a kick return for a touchdown by Jackson and a scoring run by quarterback Denver Anthony.

Lanier would climb within 21-18 in the third period before Jackson scored a third time and Patrick Brunson returned a punt for a score to give the Knights a 35-18 cushion going into the final frame.

The teams would trade scores in the fourth with Lanier twice cutting its deficit to single digits, but the Knights got a fourth TD run from Jackson and another scoring run by Harry Veal to keep Lanier at bay.

With a 47-34 lead, the Knights scored two more times while the Bulldogs (0-2) scored once to make for the final score.

“Four of the five guys we had out for the game were skill kids, but I thought our other guys did a good job and handled the load,” said FA coach Brandon Derrick. “We gave up some big plays, and I thought we might, but didn’t know we’d give up 40 points.

“I think our offensive line really took over the game at the end there, and our defensive line played well most of the game. If we can continue to play well on both lines, our skill kids can still make plays even when they get a little tired going both ways.”

The Knights will be back at home next Friday against Bethlehem Christian.