Every Wrestler Has a Story

Early this Saturday morning, January 21st, high school athletes and their coaches will slowly make their way into a quiet gym at Trion high school. Wrestlers in the elite 8 will be waking up to the most important day of their season – 1A State Duals Tournament. Focus and determination will be mixed with emotion and nerves as wrestlers look ahead to their day of competition. They will begin with weighing in, then a little breakfast before they begin stretching and warming up.

For Eric Brock, Trion’s Head Coach of 16 years, Saturday will have to be well-calculated. Not only is Brock hosting the tournament at his school and coaching, but he will be defending his State Title. Trion, Pepperell, East Laurens, Commerce, Oglethorpe County, Mt. Pisgah, Social Circle and Temple have all earned their place to compete for the title of 1A State Duals Wrestling Champions. Each team has been planning for this day down to the ounce. That’s right, for these wrestlers, one ounce can mean the difference in not being able to step onto the mat in their weight class. 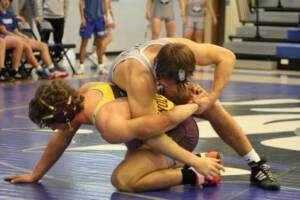 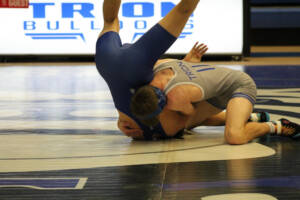 The quiet of morning weigh-ins will slowly give way to spectators eager to cheer on their team. Parents of high school seniors will come with high hopes that their senior’s last State Duals will end in victory. Team by team, eliminations feed the atmosphere with intensity. And when they are down to the final two teams on the mat, the air is electric. Fans and wrestlers alike will come undone at the seams when the team points finally indicate who will become 2023 1A State Duals Champions.

For those who follow high school wrestling platforms, many predictions have been made about teams and individuals who will be the biggest contenders on Saturday. Some sports analysts say that Trion Bulldogs will hold the same fortune as Georgia Bulldogs and become back-to-back champions. Others predict Mt. Pisgah or Social Circle will come out on top. Analysts have carefully scrutinized each wrestler’s season to come up with their predictions, but they haven’t considered everything.

They haven’t considered atmosphere, desire or stories like Carter Jackson. Senior Carter Jackson wanted to wrestle as a freshman at Trion. Coach Brock was fearful because he had scoliosis that caused shifts in his knees. Coach Brock allowed Carter to be on the team his freshman year but did not let him wrestle. One Dr. told Carter he should never wrestle while others told him to listen to his body. Jackson underwent double knee surgery his freshman year.

His sophomore year did not look much different except for a shift in Carter’s goals. He knew that to compete on a team as stacked as Trion, he would have to work hard. He researched and researched until he found the diet that could help him, a trainer that knew how to build him from the inside out and dedicated himself to waking up in the early morning hours each day so that he could give his body the hours of stretching it needed to function during his day. Day by day, Carter dialed into his faith to give him spiritual strength. Brock let him wrestle one JV match that was an exhibition… and he won!

By his junior year, his physique was radically transformed, and he was working with wrestling coaches in the off season. Finally, he was given the 152 lb. spot on varsity, one weight class up from his actual weight. His junior season he began to capture the attention of coaches and competitors but had a setback with three herniated discs. Now a senior with a record of 27-4, Carter has made a name for himself on his team as a leader and one of Trion’s elite wrestlers who is being offered opportunities to wrestle in college. 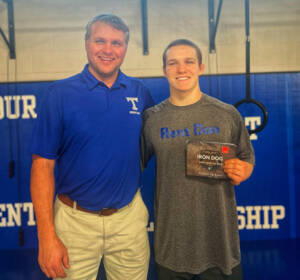 Which team will be Georgia’s 1A State Champions will be defined by a million small calculations ranging from ounces to every small detail of each wrestler’s story of hard work and determination like Carter. From snap decisions made by the coaches to slight differences in  individual referees, the tournament will take shape.  Don’t miss this much anticipated day of wrestling. Don’t wait to get your ticket. You can buy your tickets ahead at GoFan.com. Come be part of the story of high school wrestling and cheer on your team beginning at 10am.