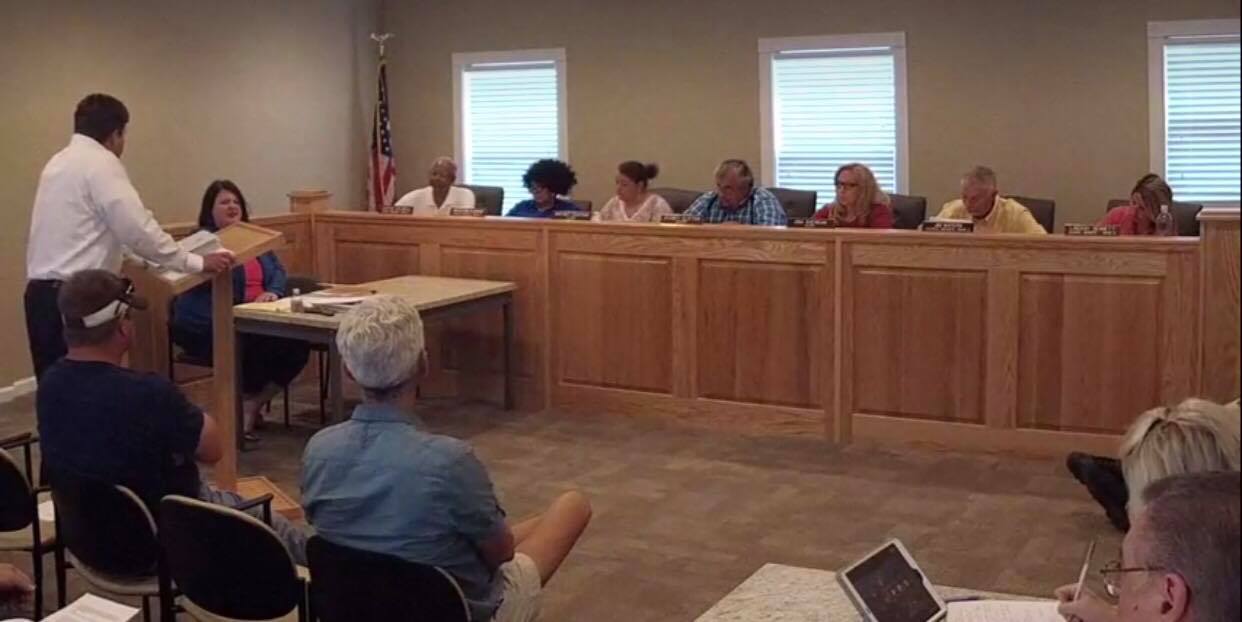 Sparks flew at Reidsville’s May City Council meeting Monday night as members of the council heard from upset citizens, an insurance broker, and the city attorney on what to do about whether or not the City of Reidsville should provide an opportunity for insurance for elected city officials.

The Council voted in April to allow city council members and the mayor to opt-in to the city health insurance plan after Councilwoman Lindsay Bennett brought forth the idea. She wanted council members to be able to buy the city health plan because it would be cheaper than in the regular marketplace. At the time, she said council members would pay 100% of the premium and deductible amount and the opt-in would have “no cost to the city.” The 3-1 vote in April, with Councilwoman Carolyn Blackshear dissenting, caused concerns in the community as only elected officials were included in the opportunity and not part-time employees, who currently do not have the ability to opt-in. Blackshear, at the meeting, alluded to the fact that the services provided to council members and their families could potentially drive up the costs because of the risk pool. Though he did not have a vote, Mayor Sydney Clifton opposed the measure.

Fast forward to Monday night, citizen Donald Prestage rose to address Council after requesting to be placed on the agenda. Prestage told Council he was extremely disappointed in their actions to discuss health insurance benefits over two meetings, not including Monday’s meeting, instead of addressing the road conditions, development, litter, and other pressing city matters. “I find it disheartening that a large portion of time is spent in these meetings” addressing personal gain, not advancing the city.

Prestage chastised the Council for voting to approve the opt-in for themselves and not for part-time employees. “Throughout all that discussion, no details were actually given on how the plan would implemented, how the cost would be billed, would it be billed to the city and then left to receive payment from the council people, or direct bill. This council is often times too eager to vote on an agenda item to get out of this meeting as quickly as it can, but it fails to ask the proper questions to make sure that when you vote, you voted informed, that you know the details that you’re voting on,” Prestage said. “The vote is happening in public, but the details are being worked out behind closed doors.” Prestage also brought up the fact that Reidsville, last year, passed an illegal referendum to be placed on the ballot due to rushing. He asked Council to take his comments as constructive criticism, not an insult.

Mayor Clifton called the agenda in a different order to continue the discussion on the health insurance issue at the request of Councilman Curtis Colwell. Ahead of approving the meeting minutes from the April meeting, Clifton asked interim City Attorney DuAnn Davis to address Michael Jackson of Glenn-Davis & Associates who was present to address how city elected officials would be added to the city health plan.

Davis asked Jackson a series of questions, beginning with the distinction between elected official coverage and employee coverage. Jackson said Blue Cross Blue Shield plans, which is the current health insurance provider for the City of Reidsville, require that an insured person be a full-time employee or work 30 hours per week, which would be problematic given council members official duties at two meetings per month. Davis also asked when the city would be able to opt-in and if the city would have to wait for open enrollment. Jackson told the Council that a waiting period would be instituted, but that they would otherwise not have to wait if they amended their city personnel policy to qualify city council members and the mayor as ‘full-time employees’ who work 30 hours per week. Jackson also explained that the city would be billed for the services and it would be on the city to collect the funds from the city council member for the premium payment.

Davis also asked if Glenn Davis could guarantee there would be no economical cost to the city by allowing city officials to opt-in. Jackson said that would not be possible. “It just depends on the demographics of the group – age, medical conditions, there are a lot of factors that go into it that could positively or negatively affect the group.”

Councilwoman Carolyn Blackshear asked Jackson to clarify that 30 hours per week meant “actual working hours” for qualification and he confirmed her issue. Councilwoman Lindsay Bennett said she didn’t care if she classified as a part-time or full-time employee.

AllOnGeorgia asked Davis if classifying elected officials as ‘full-time employees’ would create a pay problem under labor laws. The city attorney acknowledged that it would. “Plus it smells a little wrong,” Davis said.

Councilman Curtis Colwell said, “My thing is we don’t want to go down that road. I think we drop the issue right now,” despite voting in favor of the opt-in opportunity in April. As Bennett pushed back on wanting to press the issue, Colwell said he was the one to ask Glenn Davis & Associates to send someone to clarify how it would affect the city.

After the presentation by Jackson, Mayor Clifton called for a motion by council to approve the minutes from the April meeting with the exception of the portion on the vote for the health insurance coverage. The April meeting minutes itemized the discussion and the vote, but Council contemplated removing that content from the official record. The motion was made by Colwell and Jim Waters. Clifton said approving the minutes but removing that section from record was an act to rescind the vote. The motion passed 3-1 with Lindsay Bennett dissenting.

AllOnGeorgia asked Clifton how the Council could vote to undo the minutes when the act happened. By law, meeting minutes are a record of what was transpired at the meeting and are bound in an official record book. “It still happened, you can’t erase it,” AllOnGeorgia told Council. Clifton said, “When the minutes are approved, you accept them as a whole.” AllOnGeorgia then asked, “So you’re pretending like it didn’t happen?”

Citizen Donald Prestage spoke up again and said, “What she is trying to say is, when you approve the minutes, you’re not saying you agree with what happened. You’re approving that those minutes are a true and accurate account of a previous meeting…If you allow this procedural violation, then any council person that disagrees with any agreement can not approve the minutes and hold up the whole vote.”

The City Attorney then advised the Council to approve the minutes as written and to then separately vote to rescind the vote from the April meeting to provide coverage. Clifton called for a motion to approve the minutes which was made by Councilwoman Blackshear. It was seconded by Jim Waters. It passed unanimously.

The Council went on to discuss several other agenda items for roughly 30 minutes. Councilwoman Lindsay Bennett had to leave the meeting at 5:45 p.m. due to a family event. After her departure, Mayor Sydney Clifton brought the issue up again and called for Council to make an official vote to nullify the vote to provide coverage from April.

“Last month, we didn’t have all the information that people needed to make their mind up. I appreciate Michael coming down here doing what he did. At this time, I would like for us to go back and look at this insurance for council members. It’s never been done in this city before for the mayor or people sitting on the council. I speak out against this because I have to look at the city employees who work here, that work for their insurance and I can’t have four or five people get involved and ruin the insurance of the people that need it,” Clifton said.

Carolyn Blackshear once again voiced her opposition and said the idea wasn’t feasible in a city the size of Reidsville. “There’s no way anyone (on council) is working 30 hours a week.”

“This is a volunteer job,” Colwell said.

Eventually, after voting to rescind the vote from April, Colwell made the motion to NOT provide insurance coverage to council members or the mayor. It was seconded by Blackshear and the motion passed 3-0.