Two Screven County residents on opposite sides of the issue addressed Commissioners during Tuesday’s Commission Meeting at the courthouse, together comprising the totality of the meeting’s discussion on the landfill.
[Article contains video & PDF file of paperwork submitted to Commissioners] 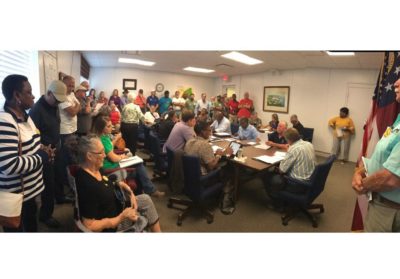 Two Screven County residents addressed Commissioners during Tuesday’s Commission Meeting at the courthouse, together comprising the totality of the meeting’s discussion on the landfill. Katelyn Weaver and Kim Brown had both previously requested to be placed on the agenda, Weaver to address misinformation on the landfill and Brown to ask questions on county procedures. The pair were the only two to speak on the matter Tuesday morning, though the conference room was standing room only with citizens flooding out into the halls. More than 75 people were in attendance.

Weaver, wearing green in support of Atlantic Waste and the proposed Green Meadows facility, told Commissioners that she has spent many hours doing research on landfills and reading articles from ‘both sides’ of the issue. She noted that she had found “zero evidence that a well managed, modern, lined, landfill will cause negative impacts to the environment or to a person’s health.”

In her presentation, Weaver also said that information shared by the opposition is often outdated, deceiving, or fitting an opinion, citing a handful of examples dispersed over the last several months. She also took aim at the petition recently turned over to Commissioners with 1,500 signatures indicating opposition to the Green Meadows facility. Weaver said Screven County is home to 10,900 adults and, in the event that all 1,500 signatures were of Screven residents, weren’t duplicated, weren’t children, and weren’t unopposed citizens, it would only represent 14% of the county population. She implored Commissioners to look beyond the 14% she defined, to remember that 9,400 people did not sign the petition, and to vote in the interest of the county as a whole.

Weaver, who is currently employed by Atlantic Waste, said she has witnessed friends leave out of high school to find employment opportunities elsewhere and that people in the community continue to struggle to put food on the table and keep their homes even when they do travel out of the county for work. “I, very proudly, can say that I no longer face those struggles and now am a prime example of what this business can do for those who were like me, living in poverty,” she told the room. In closing, Weaver told Commissioners that the fork in the road splits at contributing to the growth of Screven County’ or its deterioration.

Weaver’s packet as provided to AllOnGeorgia during the meeting is in a PDF file at the bottom of the article. AllOnGeorgia could not independently confirm that it is identical to what was provided to Commissioners, however, it does include the speech and a number of articles from Weaver.

Kim Brown was given the floor immediately after Weaver, at which time she said she had initially planned to address some procedural concerns, but may have sorted those matters out. She asked for permission to speak on another matter – the landfill – which Chairman Boyd granted as she had been given the floor.

Brown said there had been misinformation on both sides, but that the intent of the misinformation needed to be considered as well. “Is it to misguide us? To deflect us somewhere else? Environmental technicalities are humongous. I know more than I ever wanted to know about landfills. What is the intent? I don’t think it was malicious or intended to misdirect,” she told Commissioners, referring to the ‘misinformation of the opposition’ noted by Weaver.

The comparison of Green Meadows to the Chatham County landfill on Dean Forest road was also a point of contention for Brown as she cited incomparable waste types (Chatham only accepts household garbage), management types (Chatham County government manages the Chatham landfill), and the customer base (Green Meadows would be regional). Brown said a more appropriate landfill comparison would be comparing Green Meadows to Broadhurst owned by Republic Waste Services in Wayne County. Still noting a difference though, Brown said “The landfill in Wayne County sits in the middle of roughly 8,000 acres of commercial timberland owned by a Weyerhaeuser and a little bit by a timberland company. It’s not in people’s backyard.”

Brown’s presentation covered fire risks for landfills as well as safety concerns. Reading from an ad for landfill heavy equipment job postings in the region, Brown noted risks to employees, including cuts, burns, toxic chemical exposure, odors, and noise, which she says would also negatively impact the neighborhood. “There are some estimates that property values could decrease as much as 13%. That’s not going to help the tax base.”

In her closing, Brown said there are other financial means available that could and should be considered before the landfill. Her comments garned an applause from much of the room and those in the hallway.

The video of the comments by both citizens is below and begins at the 2:15 timestamp.

Screven County Commission Meeting — begins at 9AM (Please remember that if the stream is spotty, a clean version will be uploaded after the meeting without interruptions)