LETTER: AWS Was Given “Assurances” on Proposed Landfill

A letter to a lengthy list of Screven County officials from the legal team representing Atlantic Waste Services alleges that the decision to move forward with the landfill at the proposed site was due to “assurances’ made by county officials, employees, and documents in existence at the time the application was made. Now that the moratorium is delaying the application, lawyers for AWS say the county has positioned them for litigation. 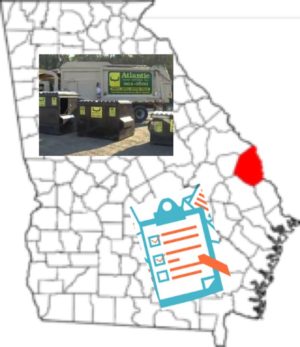 CORRECTION: An earlier version of this article said the meeting on 9/24 is set for 9 AM, as told to two AllOnGeorgia reps on 9/23. The meeting is at 8AM on Tuesday, 9/24, according to Commissioner Triplett.

A letter to a lengthy list of Screven County officials from the legal team representing Atlantic Waste Services alleges that the decision to move forward with the landfill at the proposed site was due to “assurances’ made by county officials, employees, and documents in existence at the time the application was made. Now that the moratorium is delaying the application, lawyers for AWS say the county has positioned them for litigation.

AllOnGeorgia recently obtained a total of three letters through an Open Records Request filed with the county.

The Lovett Law Group penned a letter to county officials on September 16th outlining his representation of Atlantic Waste Services. Attorney Richard Lovett also stated the due diligence AWS has done in an effort to prepare for the landfill application process and has spent over $300,000 on environmental engineers, geologists, hydrologists, and hydrogeologists.

In the letter, Lovett said that “The County knew that Atlantic Waste Services, Inc. intended to site a municipal solid waste landfill on the Property. Based on the assurances of County officials, agents, and employees, and the county’s laws, plans and policies in existence as of the date of the Application, my client contracted to purchase the property, and has expended considerable capital…..”

Lovett called for immediate consideration of his client’s application for conditional use.

The strongly worded letter from Lovett is seemingly in response to a letter Wall received from Zoning Administrator Randy Hagan dated September 12th in which he was notified that the application “would not be processed or considered for approval under the conditional use procedure of Screven County” because of the moratorium which “prohibits the processing and consideration of any landfill and recycling center application which requires consideration and conformity with the county’s solid waste management plan.”

A certified letter from Lovett Law Firm on behalf of Atlantic Waste Services addressed to County Manager Rick Jordan, Zoning Administrator Randy Hagan, and the seven county commissioners was dated September 16, 2019 and stamped ‘received’ on September 17, 2019. The letter says the moratorium is “null and void” because no written resolution or ordinance was approved memorializing the moratorium. [AllOnGeorgia made multiple attempts to obtain a copy of the resolution or ordinance from the county manager through public records requests in July, but one was never provided.]

Attorney Richard Lovett made a number of claims about the county’s handling of the application, including:

The letter also stated that the AWS would be forced to sue the elected officials and administrator in their individual capacity if a mutually reasonable resolution was not developed.

The letters from the Lovett Law Firm dated September 16, 2019 were penned one day before the most recent Commissioners meeting at which the Board voted to approve an extension on the moratorium put in place to update the Solid Waste Management Plan.

Upon convening the September 17th Commission Meeting, Zoning Administrator Randy Hagan presented an update on the Solid Waste Management Plan (SWMP) that he has been working to update with the Planning & Zoning Board and the county attorney. Hagan told Commissioners that the process has been “challenging” and they are still “some distance from where we need to be.” Hagan said the process of updating the plan is completely different from when it the SWMP was last overhauled and the Georgia Department of Community Affairs offers no assistance – financially or legally – until later in the process.

“There’s been a lot of data that’s been collected and a lot of time-consuming analysis of information that we need to complete before we recommend a plan. Not only does it affect the county, but also the municipalities of Screven County which require intergovernmental agreements…” Hagan told Commissioners. He then said Commissioner Dixon would be making a statement on behalf of those working on the SWMP update.

Commissioner Dixon thanked Hagan for his continued hard work and said the plan is complex with a lot of extended hours. “I think we owe it to Randy and the Planning & Zoning Board to extend it and having said that, I’d like to make a motion that the Board of Commissioners adopt an extension to this moratorium for an additional period of 120 days from today (Sept 17).” Dixon said the resolution had already been prepared and he asked the Board to adopt the resolution as written. It was immediately seconded by Commissioner Romeo.

His motion was met with applause from the audience, but also prompted a lawyer for Atlantic Waste Services to request a copy of the resolution from the audience. Though the attorney did not speak until the end of the meeting, he motioned Chairman Will Boyd for a copy of the document, though Boyd shook his head ‘no.’

The resolution to extend the moratorium by 120 days was reportedly prepared over the weekend and sent out to Commissioners and County Attorney Hubert Reeves, who was not present.

“So, just for clarification, Hubert has not seen the resolution?” Triplett pressed.

“It was emailed to him,” Romeo told Triplett.

“Right now, these guys have done a lot trying to get this thing situated. I don’t have a problem with the extension, I just think that it will give them the chance to do, to be fair with the citizens and fair to the (inaudible) to make sure we do what needs to be done,” Commissioner J.C. Warren said.  “If no one else has got anything, we’ve got a motion and a second on the floor.”

Dixon echoed, “120 days is nothing compared to ‘what could be,’ so I don’t think 120 days is too much to ask. It’s a lot of work.It’s more confusing and complicated than it needs to be.”

“I agree, right now we’re complicating it a little more, there’s already been a motion and a second, let’s move forward,” Romeo said.

Chairman Will Boyd told Romeo, “We’re still discussing,” which is the proper order of conducting business under Robert’s Rules of Order. “As soon as we finish, I’ll move forward.”

Triplett told his fellow Commissioners that he wanted to be on record ‘voicing his concerns’ that the county attorney learned of the resolution on Saturday. “I’m okay going with it, that’s fine. We looked pretty hard to him the first time we did it and he didn’t even know about this. He might of known about it yesterday, but as of Saturday, I talked to him, he didn’t. I just want to express that concern.”

Commissioner Edwin Lovett said the county started down the path and the work hasn’t been finished. “We need to finish the work before we move any further. If he needs more time to get that done, I understand there’s a lot of moving parts, we need to give him time to get the work done.”

The resolution was approved 5-0 with no dissenting votes, but Commissioner Michael McBride did not raise his hand to vote.

Commissioners have scheduled a special-called meeting for Tuesday, September 24, 2019 at 8:00 A.M..

The video of the Commission meeting is below.