“A CR would send a terrible message to adversaries, allies, and most importantly, the soldiers, airmen, and Marines of the Joint Force.” 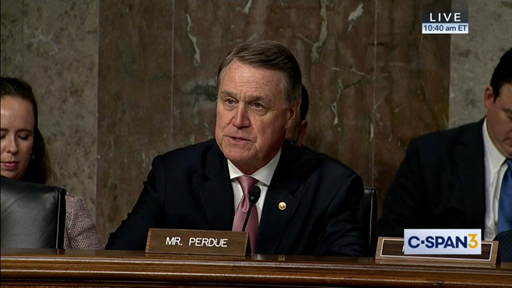 “A CR would send a terrible message to adversaries, allies, and most importantly, the soldiers, airmen, and Marines of the Joint Force.”

Senator David Perdue (R-GA), chairman of the Senate Armed Service Seapower Subcommittee, asked General Mark A. Milley, President Trump’s nominee to be Chairman of the Joint Chiefs of Staff, about the devastating impact a potential yearlong continuing resolution (CR) would have on the military.

Senator Perdue: “General Mattis said the greatest threat to national security is the federal debt. You talk about how consistent funding of the military could make a dramatic improvement, not only in readiness, but in moving to the new National Defense Strategy. Yet, there are some who are talking about a one-year CR for next year. It looks to me like there would be several ramifications:

General Milley: “A one-year CR, at least to my knowledge, has never been done. So, we’d actually be in uncharted territory if we went there. CRs in general are a very ineffective and inefficient use of the taxpayers’ dollars, and we’re all supposed to be stewards of the taxpayers’ dollars. In my experience as chief of staff of the U.S. Army, CRs cause the price point of products and services to go up because you can’t guarantee a cash flow to the commercial partner you’re working with. I think a CR in general – whether one-year or one-month – is a poor way to do business. Having said that, I think that this CR would have a negative impact in terms of training, manning, equipping, procurement, modernization, spare parts, maintenance, end strength, pay and benefits, etc. Those are tangible pieces. But there’s an intangible as well, which is the message it sends to adversaries, allies, and most importantly, the soldiers, airmen, and Marines of the Joint Force. I think it sends a terrible message to them.”