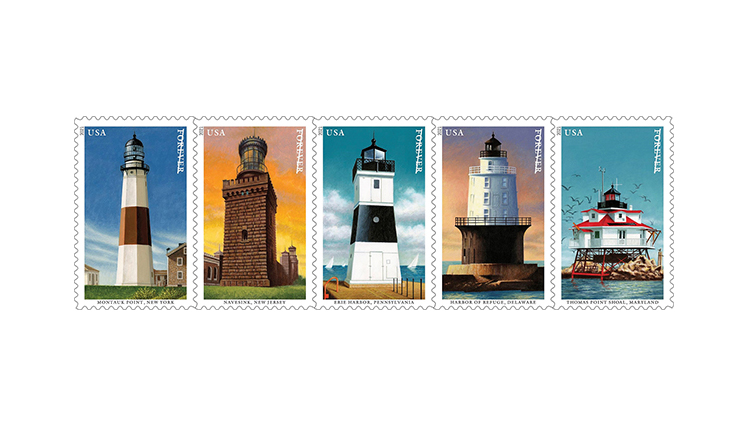 Lighthouses — with their beauty, mystery and aura of romance — have fascinated and enchanted people for centuries. The Postal Service continues to share in that tradition with Mid-Atlantic Lighthouses Forever stamps, the latest in its continuing series of popular lighthouse stamps.

For three centuries, the beacons of America’s lighthouses have been guiding mariners through treacherous waters. Though the five mid-Atlantic lighthouses being recognized have a common purpose, each has its own unique story — and its own mysterious, eternal appeal.

Authorized by George Washington and completed in 1796, Montauk Point Lighthouse (New York) is one of the oldest lights in continuous operation in the United States.

Navesink (New Jersey) is one of only seven stations in the country to feature two lighthouse towers.

The tower of the Eric Harbor Pierhead Light (Pennsylvania) tapers from its base to its midsection, then rises straight from there to the top, the only lighthouse tower with this shape in the United States.

Harbor of Refuge Lighthouse (Delaware) has stood within the breakwater since 1926 and is still an active aid to navigation.

And located in the Chesapeake Bay (Maryland), the Thomas Point Shoal Lighthouse has withstood the elements since 1875.