Commissioned by the Afterschool Alliance, the new study finds that the families of 24.6 million children — more than ever before — are unable to access a program and many report cost as a barrier. 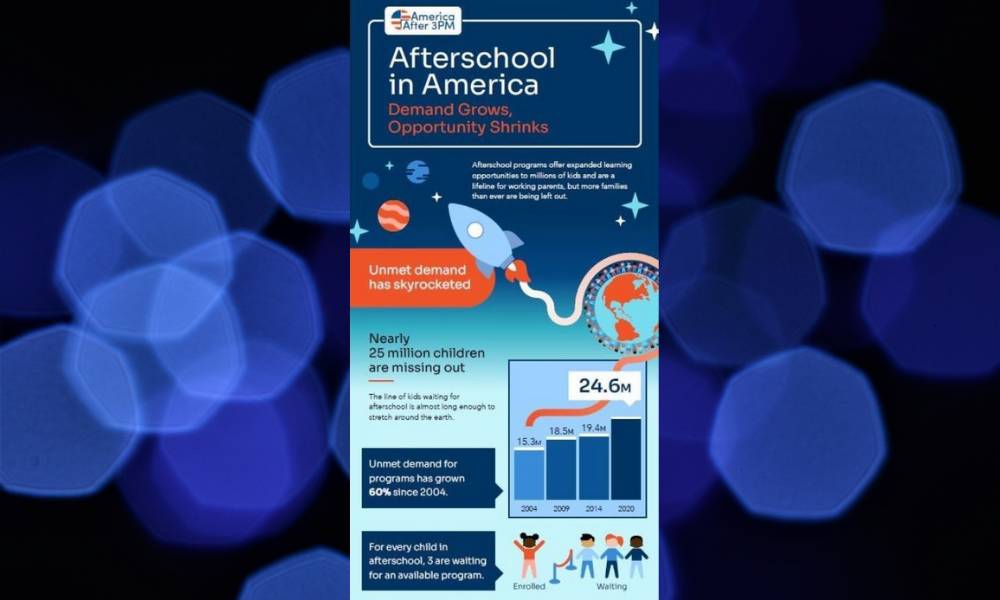 Commissioned by the Afterschool Alliance and conducted by Edge Research, the new study finds that the families of 24.6 million children — more than ever before — are unable to access a program and many report cost as a barrier. It exposes significant inequities, with Black and Latinx children disproportionately affected: Parents of 58% of Black, 55% of Latinx, and 46% of white children not currently in an afterschool program say they would enroll their child if they could.

America After 3PM 2020 finds that afterschool participation has dropped precipitously, with fewer children in programs today than in 2009. The decline means more children lack essential supports that can help them succeed. It also signals that, while publicly funded afterschool programs have helped millions of students, public dollars are not nearly sufficient to keep up with demand today.

The study is based on responses from more than 30,000 U.S. families and builds on household surveys conducted in 2004, 2009 and 2014. It offers a pre-pandemic snapshot of how children and youth spend their afternoons and has significant implications for our post-pandemic world. It also includes a separate survey of parents conducted this fall.

Satisfaction with programs is the highest it has ever been, with 94% of parents of afterschool students saying they are satisfied with their child’s program (up from 89% in 2014). There is overwhelming recognition of the benefits afterschool programs provide, from helping kids engage with peers and reduce screen time to enhancing their interest in STEM (science, technology, engineering and math) to reducing their use of drugs and other risky behaviors. Eighty-seven percent of parents support public funding for afterschool programs — the highest level of support ever recorded.

Core findings from America After 3PM 2020:

“It is unacceptable that the parents of nearly 25 million students are struggling to find or afford an afterschool program,” Grant said. “The data suggest that parents who could find a way to pay for these programs in the past can no longer do so. Every parent should have access to an affordable, quality afterschool program that will keep their child safe, supervised and learning. This new study paints a picture of unmet need, with the heaviest burdens falling on low-income families and families of color.”

“During the pandemic, afterschool programs have been stepping up to meet the growing needs of students and families, even as programs face higher costs, dwindling budgets, and uncertain futures themselves,” Grant added. “Nationally, half of afterschool programs that are serving students in person, and are located in school districts that are operating virtually, have wait lists. We must do better. Publicly funded afterschool programs have been a lifeline for low-income children. We need to bring more federal, state, local, business and philanthropic support to meeting the needs of students and their families after school.”

Findings from America After 3PM 2020 are based on a nationally representative survey of randomly selected adults who live in the United States and are the parent or guardian of a school-age child who lives in their household. A total of 31,055 households were surveyed in English or Spanish, and a subset of households (14,391 respondents) answered follow-up questions regarding afterschool experiences or barriers to participation in afterschool, as well as perceptions of afterschool programs. Data from interviews are weighted on race and income within states and by state population. The overall margin of error for child-level and household-level data is +/- < 1 percent. The survey included at least 200 interviews in every state and the District of Columbia. Data were collected between January 27 and March 17, 2020, by Edge Research.

The October 2020 survey of parents was conducted by Edge Research and is a nationally representative online survey fielded October 12-29, 2020, of 1,202 parents of school-aged children.

The Afterschool Alliance is a nonprofit public awareness and advocacy organization working to ensure that all children and youth have access to quality afterschool programs.