Among his charges were unlawfully possessing more than 40 machine guns and other prohibited firearms, failing to disclose his foreign financial interests and contacts in China in order to obtain a secret-level security clearance, and cheating on his federal income taxes. 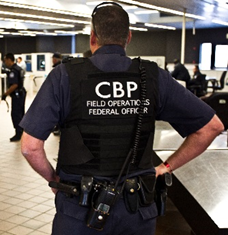 A former U.S. Customs and Border Protection watch commander at the Long Beach Seaport pleaded guilty this week to federal criminal charges for running an illegal gun-selling business, unlawfully possessing more than 40 machine guns and other prohibited firearms, failing to disclose his foreign financial interests and contacts in China in order to obtain a secret-level security clearance, and cheating on his federal income taxes.

United States District Judge R. Gary Klausner has scheduled a January 14, 2020 sentencing hearing, where Xu will face a statutory maximum sentence of 25 years in federal prison. Xu has been in federal custody since his arrest on February 5.

Xu admitted in his plea agreement and in open court today, that he sold at least 99 firearms without the required federal license between the late 1990s and his arrest. To increase the profit margin of his unlawful firearms selling business, Xu exploited his status as a law enforcement officer to purchase and then transfer “off-roster” handguns that cannot be sold to the general public by a federal firearms license (FFL) dealer, according to the plea agreement.

Xu also sold or transferred firearms within days or weeks from the date he purchased them and operated several accounts on Internet marketplaces to advertise his firearm business, according to court documents.

According to plea documents and Xu’s admissions in court today, in July and August 2018, Xu sold four firearms to an undercover agent posing as a buyer, and Xu unlawfully sold three of the firearms out of the trunk of his car. The firearms included an “off-roster” pistol, high-capacity magazines, and a short-barreled rifle, the plea agreement states.

A search of Xu’s residence on February 5 recovered more than 250 firearms, including 41 fully-automatic firearms or machineguns and two additional short-barreled rifles – all of which never were registered with the Bureau of Alcohol, Tobacco, Firearms and Explosives (ATF) as required by federal law.

Xu also admitted that he made materially false statements on three questionnaires submitted to the Office of Personnel Management (OPM) to obtain a secret-level security clearance. OPM is a federal agency that oversees applications for security clearances for federal government employees.

Specifically, Xu maintained foreign financial interests and had nearly weekly contacts with his business associates in China as part of his employment as an accounts manager for a China-based auto parts import company. Xu collected a commission for his work and remitted the profit to his China-based business partners. But on his security clearance questionnaires in 2003, 2011 and 2015, Xu falsely denied maintaining close and continuing contacts with foreign nationals, denied having a foreign financial interest, and denied having a business venture with a foreign national.

Finally, Xu admitted in his plea agreement that he willfully evaded the payment federal income tax from 2005 to 2017 by setting up Trans Pacific Group, Inc. Xu used this Florida-incorporated sham company as a means to claim fictional ordinary business losses to offset his ordinary income and fraudulently evade tax due to the Internal Revenue Service.

“Mr. Xu’s public life as a federal officer masked his private greed and disrespect for the law, which he demonstrated through illegal weapons sales, tax evasion, and lying about contacts with foreign nationals,” said United States Attorney Nick Hanna. “Public officials promise to act with integrity when they take an oath of office, and we will zealously prosecute those who mock the laws they have sworn to uphold.”

“ATF Los Angeles Field Division regularly works with our federal, state and local law enforcement partners to protect the public from violent criminals and firearms traffickers,” said the Bureau of Alcohol, Tobacco, Firearms and Explosives (ATF) Special Agent in Charge of Los Angeles Field Division Carlos A. Canino. “We are proud to have assisted in bringing this case to a positive conclusion.”

“Mr. Xu’s plea to a variety of offenses including trafficking in illegal firearms, tax fraud and lying to his government employer about Chinese contacts in order to maintain a security clearance, is a necessary step in holding him accountable for years of criminal activity,” said Paul Delacourt, the Assistant Director in Charge of the FBI’s Los Angeles Field Office. “Our communities and our nation are more secure now that Mr. Xu has been stripped of his access to guns and confidential information.”

“As admitted in court today, Xu made many bad decisions during his employment as a sworn law enforcement officer with the United States Customs and Border Protection – least of all was his ongoing decision to evade the payment of taxes due to the IRS for a period of over 10 years through the use of a sham corporation,” stated Special Agent in Charge Ryan L. Korner with IRS Criminal Investigation. “IRS Criminal Investigation is proud to partner with the FBI and ATF in this thorough investigation and hopes the message is clear–operating outside the law and failing to pay taxes has severe consequences.”

This matter is being investigated by the Federal Bureau of Investigation; the Bureau of Alcohol, Tobacco, Firearms and Explosives; and IRS Criminal Investigation.

This case is being prosecuted by Assistant United States Attorneys Annamartine Salick of the Terrorism and Export Crimes Section, Valerie L. Makarewicz of the Major Frauds Section, and Brent A. Whittlesey of the Asset Forfeiture Section.

Company to Pay $11 Million to Settle False Claims Allegations for Products Sold to Government
“Deadliest Catch” Cast Member Sentenced to 51 Months Imprisonment for Being a Felon in Possession of a Firearm
Posting....