DHS Says Border Apprehensions Down 11% for the Year, 28% in June 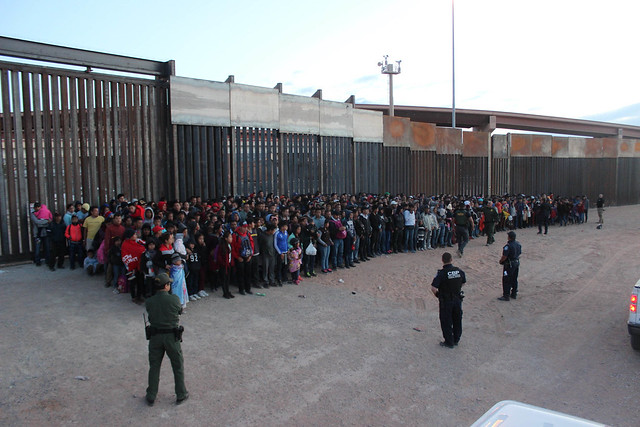 Department of Homeland Security (DHS) U.S. Customs and Border Protection (CBP) data for June indicates a 28 percent drop in enforcement actions along the Southwest Border since May, from 144,278 to 104,344. The announcement was made in a press release Tuesday.

This year’s decline in apprehensions from May to June, the agency says, outpaces last year’s decline by 11 percent. The reduction in apprehensions accounts for decreases across all demographics, including unaccompanied minors, family units and single adults, as well as decreases in migrants from all Northern Triangle countries, particularly those coming from Guatemala. DHS says decreasing apprehension numbers will provide greater opportunities for the DHS to address capacity challenges for those in custody and speed the movement of unaccompanied children into Health and Human Services (HHS) care.

From a press release:

DHS has been taking a “whole of government” approach to confront the ongoing crisis and fulfill our humanitarian and security obligations, including surging personnel from across the Department to high capacity locations on the Southwest border, requesting and receiving continued support from the Department of Defense, expanding medical services, establishing additional soft-sided facilities, surging rescue response operations, and requesting and receiving emergency supplemental funding from Congress.

We are also continuing our collaboration with our international partners, formalizing a number of initiatives with Northern Triangle countries to improve the lives and security of our respective citizens by combating human trafficking and the smuggling of illegal goods, helping to limit ‘push’ factors that encourage dangerous irregular migration to the U.S. Additionally, we are working with the Government of Mexico to expand Migrant Protection Protocols to allow the U.S. to more effectively assist legitimate asylum-seekers and individuals fleeing persecution and deter migrants with false or meritless claims from making the journey. And since the administration reached a new agreement with Mexico, we’ve seen a substantial increase in the number of interdictions on the Mexican southern border.

These initiatives are making an impact. However, we are still in an ongoing border security and humanitarian crisis. U.S. Border Patrol made 688,375 apprehensions through the end of June, 140 percent higher than through this time last year. And our June apprehension numbers are still higher than last year’s, when we were already in a crisis. We are past the breaking point and in a full-blown emergency. This situation should not be acceptable to any of us. I am proud of the men and women of DHS who are doing everything they can to achieve our humanitarian mission. However, in order for us to solve this crisis and to create lasting change at the border, we must address the vulnerabilities in our legal framework.