Christopher Shane Dreiling was sentenced in federal court on two counts of assault with intent to murder within the special maritime jurisdiction of the United States. 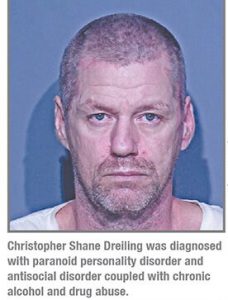 United States Attorney Richard W. Moore of the Southern District of Alabama announced that July 9, 2019, Christopher Shane Dreiling was sentenced in federal court on two counts of assault with intent to murder within the special maritime jurisdiction of the United States. Dreiling received a thirty year prison sentence, consisting of fifteen years on each count of assault to run consecutive to each other.

At trial, a jury found that at dusk on August 20, 2017, Dreiling attacked the captain and another crew member of the Billy B. a commercial fishing vessel. After stabbing both victims multiple times with a fillet knife, Dreiling forced the victims off the boat and into the Gulf of Mexico approximately 46 miles south of Gulf Shores/Orange Beach. A distress call was received by Coast Guard Sector Mobile, which immediately dispatched the CGC Kingfisher, a helicopter from CG AIRSTA New Orleans, and a small boat from CG Station Pensacola. Sector Mobile also notified the Coast Guard Investigative Service. Because of quick and heroic action by the United States Coast Guard, both victims were eventually rescued from the water and evacuated to a hospital in Pensacola.

United States Attorney Richard W. Moore said, “We are blessed to live on the Gulf Coast where life on the water is a part of our proud heritage.  When we go out on our rivers, Mobile Bay or the High Seas we deserve to do so free of fear of marauders who would rob us of the enjoyment of being on the water.  Fortunately, we have a skilled and vigilant Coast Guard on duty and ready to respond like they did in this case.  We will not tolerate criminal acts anywhere within our jurisdiction whether it is against our commercial fishermen or our recreational boaters.”

“Men and women from multiple Coast Guard units immediately responded to this attack, demonstrating how committed we are to protecting the lives of mariners regardless of the hazard,” said Rear Adm. Paul Thomas, Eighth District commander.