An old Marine looks at safety in schools 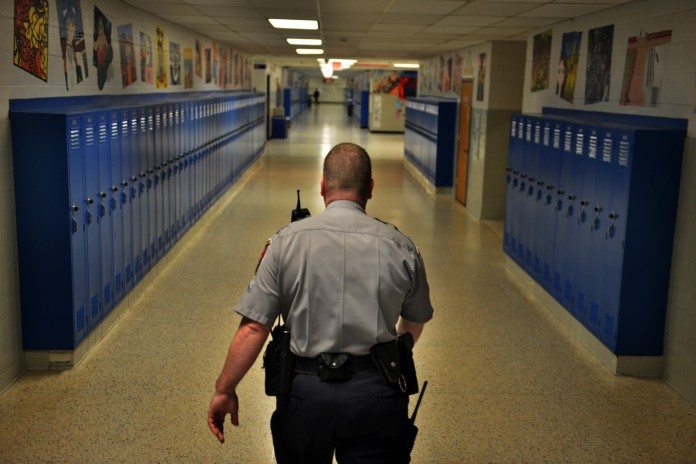 Muscogee County is not the only governing body concerned with school security. The safety of school children is a frightening issue everywhere — including Chattooga County, a county that is closer to Chattanooga, Tenn., than Columbus, Ga.

School safety is making headlines today in Lee County, Ala., where authorities are working with parents and educators in the Beulah community. It is expected to a lively issue at the upcoming meeting of the Muscogee County School Board.

In Chattooga County the local board recently discussed school safety and at their meeting Superintendent Jimmy Lenderman — a Marine colonel in another life — shared a unique way of keeping children safe.

He sees such matters through a different set of eyes. He’s an educator and he’s a Marine, so his views might be more radical than some. Before they are tossed aside, they ought to be closely considered and studied.

Here’s a report on that board meeting from Cassie Bryant of All On Georgia.com/Chattooga

Superintendent Jimmy Lenderman addressed the board, school administrators, concerned citizens and local law enforcement with his plan for safety in the Chattooga County School System.

With the topic of school safety blaring across national headlines, it is important to note that, before becoming Superintendent of Chattooga County Schools, Lenderman had 27 years of service in the United States Marine Corps, eventually retiring as Col. Jimmy Lenderman.

Before being appointed superintendent, he was ROTC Commander of a North Carolina high school, a vice principal, principal and coach in Chattooga County.

His military background fuels his core belief that each problem should be confronted and solved and his leadership has drastically impacted the school system over the past six years.

Reprinted courtesy of All On Georgia/Chattooga

Lenderman opened the meeting by clarifying that each school has an existing safety plan that is approved by GEMA. The state has offered no recommendations or changes to the current safety plans that are already in place in Chattooga County. He said he would not give the details of these safety plans because there is information in those plans that terrorists might take advantage of.

“We do not want a terrorist to know how we evacuate our school,” said Lenderman. “I will not discuss, in detail, the plans.” Sheriff Mark Schrader added that it is standard procedure to not release any details of active shooter trainings.

Lenderman emphasized that he would use the term terrorists because “…anyone who comes a school campus to shoot children, I believe,  is a terrorist. Sometimes our government is afraid to use that term.”

More Student Resource Officers. “There will be a SRO in every school,” said Lenderman. We have the funds and there will be an armed officer in each of our schools.

Installing a Safe/Armory with high-powered weapons that can eliminate a terrorist. Some hallways in Chattooga Schools are over 100 yards long. “I don’t know of anyone who can shoot a pistol accurately at 100 yards,” said Lenderman. “I want to put a safe in all schools, with high powered weapons with the capability of taking out a terrorist.”

This would be a specific safe with a quick open lock that could instantly place the SRO on equal status of engagement with a terrorist. “You don’t need to be carrying a .38 pistol attacking someone who is carrying a M-16 that has been modified and shoots automatic.”

As Lenderman addressed the subject of arming certain people in schools, three decades of military service shown through with every word he spoke.  He said he can teach someone, after being in the Marine Corps for 27 years, how to shoot or clean a pistol, however, the single thing “most difficult thing to do is, can you kill a 12-year old? Can you kill the terrorist that is in your classroom?”

Lenderman explained that he posed that question to several teachers; “…can you kill a 12-year old?” Not one teacher raised their hand. The next day Lenderman said teachers approached him expressing that, if the school has this policy (arming teachers), they would want the training.

“That is the thing you must remember… it is going to be difficult,” continued Lenderman. While arming a select group of highly-trained teachers/faculty to respond to emergency situations remains a controversial topic, there are critical details that have not been talked through. Fundamentally, the superintendent believes there are some people who should carry a weapon in the school.

Bullet Proof Glass for the entrances of all schools. This would give more time to push the panic button. The primary entrance foyer to all schools should be the ONLY unlocked access to a school during the day.

As seen in Sandy Hook, a shooter can simply shoot his way past a secretary and locked doors. Secure, bullet-proof lobbies could offer a deterrent just long enough for a school-wide lock down to be implemented and alert SRO’s, outside law enforcement and armed staff/faculty within the school.

Discussion of metal detectors. Lenderman did not rule out the use of metal detectors, but he did say that it’s not high on his list of priorities. “Terrorists are not going to stop because a buzzer goes off,” he said. Schools that have existing glass-panel entry doors into the classrooms will be modified and glass panels would be covered from the inside, Lenderman said.

Lenderman emphasized the the basics for any terrorist situation. Run, Hide and Fight.

If you’re in the classroom, stay in your class.Teachers will be required to have their doors locked at all times. “It doesn’t have to be closed but it does have to be locked,” Lenderman said. All school doors require a key to operate the lock and he pointed out the precious seconds wasted looking for a key and then locking the door could be the difference between life or death.

“Terrorism is increasing and we must be prepared,” Lenderman said. “We have the funding to do these things, children’s safety and welfare are No. 1 priority,”