War on Terrorism Memorial at National Infantry Museum will be rededicated on Sept. 8 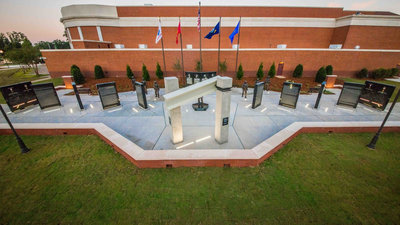 Twenty-five more American heroes have lost their lives since the Global War on Terrorism Memorial was dedicated 11 months ago and the names of these honored service members will be added to the 6,940 already etched into the black granite panels in a ceremony next month at the National Infantry Museum and Soldier Center.

The impressive memorial will be rededicated on Saturday, Sept. 8 with Gold Star family members being honored guests at the 11 a.m. event that highlights a weekend of patriotic celebrations at the museum on the grounds of the Fort Benning Maneuver Center of Excellence.

“It is a sad truth that more American service members’ lives will be lost before the War on Terrorism is over,” noted Gen. John Abizaid, a former GWOT commander and current Chairman of the National Infantry Museum Foundation Advisory Board. “We will add their names for as long as we have to, and they will never be forgotten.”

The public is invited and so are Gold Star family members – an organization composed of people those who have lost loved ones in military service. Gold Star families who have not yet received an invitation are encouraged to call the museum for details of the event, including a VIP reception the night before and breakfast preceding the ceremony.

Gold Star families are a modern reference that comes from the Service Flag. Such banners were created during World War I. The flag includes a blue star that denotes every member of an immediate family serving in the armed forces. If a loved one is lost, the blue star is replaced by a gold star.

Patriot Guard Riders are once again organizing a motorcycle ride that will end at the museum located on the south side of Columbus, Ga. Riders holding American flags will line Heritage Walk as guests arrive for a ceremony that is becoming an annual event.

The memorial to the Global War on Terrorism includes eight granite panels etched with the names of 6,940 soldiers, sailors, airmen and Marines who have died in service to the GWOT since 9/11. A 13-foot steel beam retrieved from the wreckage of the World Trade Center and donated to the museum by New York City firefighters sits atop concrete columns that represent the Twin Towers.

The joint-service memorial stands in honor of all service members who have served in the Global War on Terrorism since 9/11 and the families who support them. This includes active duty, veterans and those who have made the ultimate sacrifice defending their country.

Each year, the National Infantry Museum Foundation will rededicate the memorial to honor the newly fallen on the first Saturday following Labor Day. Gold Star families and others seeking information about the event may call Rachel Goodman at 706-653-9234 ext 5828.

The National Infantry Museum and Soldier Center at Patriot Park, a 155-acre tract linking Columbus, Ga., and the Maneuver Center of Excellence at Fort Benning, is the first world-class site to pay tribute to the U.S. Army Infantryman and those who fight alongside him. As the nation’s only interactive Army Museum, the museum showcases the contributions of the Infantry Soldier in every war fought by the United States. The complex includes a parade field, memorial walk of honor, Global War on Terrorism Memorial, Vietnam Memorial Plaza, authentic World War II Company Street and Giant Screen Theater. For information, visit www.nationalinfantrymuseum.org.