Painting by Tennessee Williams’ on display at CSU’s Schwob Library 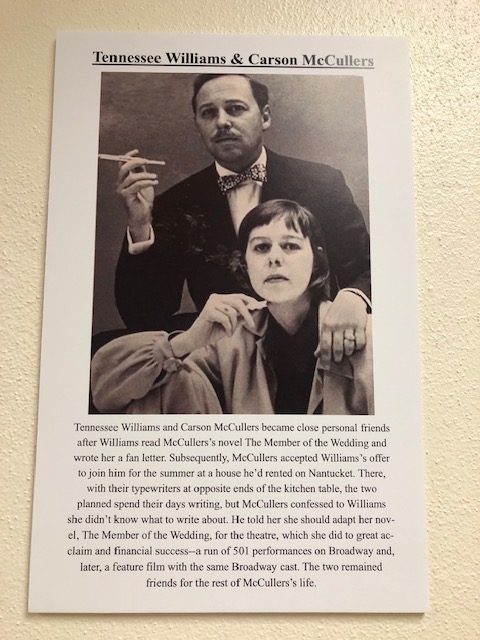 An original painting by famed playwright Tennessee Williams is now on display in the gallery of Columbus State University’s Schwob Memorial Library.

The painting, titled L’Apres Midi Chez L’Indio, will be displayed at CSU through the end of October along with items from the CSU Archives’ Carson McCullers Collection.

The Schwob Library is located on CSU’s main campus, 4225 University Avenue in Columbus. Check the website for hours or call 706-507-8670.

Williams, most famous for plays such as A Streetcar Named Desire, The Glass Menagerie, and Cat on a Hot Tin Roof, was close personal friends with Columbus-native Carson McCullers. It is believed that Williams convinced McCullers to adapt her novel, The Member of the Wedding, into a play. The play went on to run 501 performances on Broadway and was later adapted into a feature film.

Williams’s painting, L’Apres Midi Chez L’Indio, was painted in 1979.  The subject of the painting strongly resembles actor Emilio Fernandez (1904-1986), the son of a Kickapoo Indian and revolutionary general who became celebrated by Mexican filmgoers as “El Indio.”

The painting is on loan from the collection of Dr. Kenneth Holditch, a friend and frequent biographer of the late playwright who was born in Columbus, Mississippi.

The exhibit, which is free and open to the public, represents a collaboration among the Schwob Memorial Library, the Carson McCullers Center for Writers and Musicians, and the Southern Literary Trail — the nation’s only tri-state literary trail connecting great 20th Century novelists in Georgia, Alabama and Mississippi.

About the McCullers Center

A public outreach unit of Columbus State University, the Carson McCullers Center for Writers and Musicians is dedicated to preserving the legacy of Carson McCullers; to nurturing writers and musicians and educating young people; and to fostering literary, musical, artistic, and intellectual culture in the United States and abroad. The Center operates a museum-performance space in McCullers’s childhood home in Columbus, and a residency-fellowship space in her adult home in Nyack, New York. Writers, artists, musicians, and scholars may apply for fellowships to live for periods of time in either home, and CSU students have the opportunity to study away in the Nyack home.