In Georgia, she planned events — in West Virginia she writes books 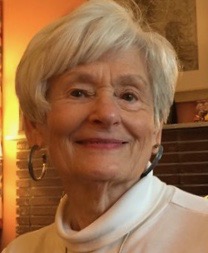 People in Columbus remember Carter Taylor Seaton as a creative soul who planned clever events at the Columbus Georgia Convention and Trade Center and as marketing director at Columbus Square Mall tried to breathe life into a shopping center that was on life support. Years later she moved home to West Virginia where she found a new life as a ceramic sculptor and acclaimed author. In 2016 she received the highest award West Virginia artisans can be given: the Governor’s Award for Lifetime Achievement in the Arts. She and her husband, Richard Cobb, live near her childhood home in Huntington, so it’s appropriate that her latest book, “Me and Maryann,” recalls a friend who watched Howdy Doody with her and helped her swipe grapes from a neighbor’s arbor. It’s a description of how friendship can survive. Listen to Carter describe her friend and her latest book.

As a post-World War II middle class child, I grew up in an idyllic neighborhood. My parents could let me play within the geographic boundaries of my neighborhood and not expect to see me until mealtime. They didn’t worry about kidnappings, drug dealers, or strangers. “Me and MaryAnn” typifies that time. We could have lived anywhere in the United States, but we lived in Huntington, West Virginia.

When I was three-years-old, I met MaryAnn and she remained my best friend until she died two years ago. She and I were soul-mates who spent every day of our childhoods together. We walked to elementary school a few blocks away together, played after school together, and as preteens giggled or cried over boyfriends together.

Before my family got a television set, I watched Howdy Doody at her home. Because we had a swimming pool, she spent hot summer days at mine.

We certainly weren’t juvenile delinquents but we loved to push the envelope of behavior. We tried to make perfume from rose petals; we tried to swipe grapes from a neighbor’s arbor.

We confounded builders who tried to develop our favorite shortcut; we went skinny-dipping at a slumber party. We broke more than a few of our parent’s rules, and usually paid the price.

All these stories are in this collection. There probably are more.

As a young woman, she was the more adventurous. She lived in Greenwich Village and went to Woodstock. I married, had children, and stayed in Huntington. When I had children, I used to tell them the tales of our mischievousness.

Therefore, when she’d return home, my kids thought she was the coolest person ever. Hippie beads, fringed vests, boots, huge hoop earrings, and boots no matter the season. As we grew older, MaryAnn moved to California but we kept in touch. I visited several times and each time we laughed at the memories of our childhood.

I got more adventurous as I got older. I went to work, to my father’s chagrin, when few women did so. Later I moved to Georgia for ten years before returning to West Virginia so I’d be close to my grandchildren. I became a scuba diver and ran three marathons after I was fifty.

As a former marketing professional, Carter Taylor Seaton knows how to sell books as well as write them.

Fifteen years ago, I became an author and now have five published books. As grandchildren arrived, I mesmerized them with these stories of childhood pranks. Now there are great-grandchildren and I hope they’ll laugh at them as well.

When I visited MaryAnn just before she died, a woman saw me leaving her house, and asked if I was from Washington state since that was the license plate on my rental car. I said no, that I was from West Virginia. Her face brightened as she said, “you must be Carter.”

My stories had preceded me to California.

Column: Polio didn’t keep Nordmark from dunking a basketball or being successful at life
Painting by Tennessee Williams’ on display at CSU’s Schwob Library
Posting....