It is the single largest investment among contracts awarded statewide earlier this month. 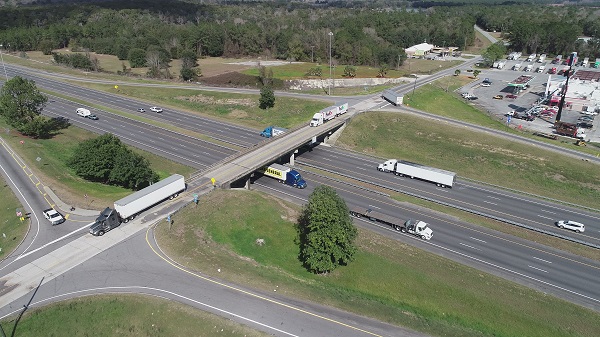 It is the single largest investment among contracts awarded statewide earlier this month.

Construction is expected to improve operation and accommodate any future widening of the interstate. The new bridge will be built to the south of the existing structure that was built in 1961. It will provide one lane in each direction, a raised median, sidewalk and curb and gutter. The biggest change to the interchange will be construction of roundabouts at the ramp endings. The roundabouts will include sidewalk, curb and gutter, raised islands/medians and lighting. The middle of the roundabouts will include roadway signs, grassed areas and future potential landscaping.

“Construction of this much-needed new bridge will be a major upgrade for the vital truck terminal and entry point to Georgia from Florida,” said Tim Golden, chairman of the State Transportation Board and representative of the district that includes Lowndes County.

The contract was awarded to Reames and Son Construction Co. Inc. No start date for construction has been determined. Construction is expected to be complete in the summer of 2022.

Georgia DOT also awarded contracts for two other Southwest Georgia counties. The State Route (SR) 111 bridge over Little Creek tributary in Colquitt County will be replaced. Traffic will use an on-site detour during construction. The bridge is west of Moultrie between Kendallwood Church Road and Bay Rockyford Road and was built in 1970. The $4.6 million contract was awarded to Southern Concrete Construction Co. Construction is expected to be complete in the summer of 2021.

About 3.5 miles of SR 1 in Miller County will be resurfaced, from north of Thompson Town Road to south of the SR 91/SR 45 intersection. The $2.1 million contract was awarded to Oxford Construction Co. and the completion date is early 2021.