DOCS: Guyton Chief Filed Complaints on Superiors Who Sought to Discipline Him 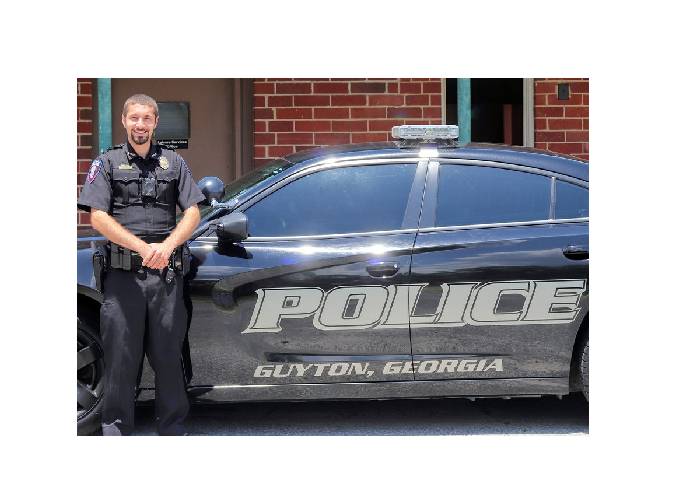 AllOnGeorgia published a piece in January detailing a number of questionable incidents in Guyton Interim Police Chief Joseph Coppola’s past and highlighting at least two incidents in which the interim chief was dishonest in his official capacity as a law enforcement officer.

But it appears the dishonest claims did not stop there.

Documents provided to AllOnGeorgia after the release of the expose indicate that previous department heads unsuccessfully attempted to bring concerns to the attention of Guyton public officials, made attempts to document issues with Coppola, and went as far as to contact state agencies and constitutional officers over concerns about his behavior. With the exception of now-terminated Public Safety Director Stacy Strickland – who hired Coppola – the interim chief has lodged complaints against nearly every superior who sought to supervise Coppola in his employment with the Guyton Police Department.

Coppola lodged a complaint against former Public Safety Director Kenny McDonald alleging unaddressed incompetency by two other officers in the Guyton Police Department, refusal by McDonald to allow Coppola to obtain the necessary training requirements, and issues with the fire department. Coppola also claimed McDonald violated his right to privacy on a city computer by installing microphones and GPS tracking devices.

An investigation conducted by Mayor Jeff Lariscy, which included the interviews of 10 witnesses and a forensic review of Coppola’s city-issued computer determined that the allegations were “unfounded.” In an extensive four-page report, McDonald was exonerated of any claims of wrongdoing by Coppola and Lariscy determined that McDonald was not only properly documenting any personnel issues and appropriately compensating to provide 24-hour coverage of the city even with officer shortages, McDonald was “supportive of training” and “balanced” with providing appropriate coverage.

Recommendations were ultimately made by Lariscy in writing that McDonald ‘continue to perform his duties as Public Safety Director.’

Former Interim City Manager Travis Grubbs, who was at the helm of the city at the same time as McDonald, went as far as to contact the Georgia Peace Officer Standards and Training (POST) Council about Coppola’s behavior. In a letter dated May 6, 2019, Grubbs stated that:

Grubbs also stated he contacted the District Attorney’s Office for the Ogeechee Judicial Circuit, per the instruction of POST, but never heard back.

Grubbs and McDonald ultimately resigned from their positions on the same night in February 2019. One month after McDonald resigned, Coppola was named Interim Police Chief and has been serving in that capacity ever since. Coppola was the only police officer in Guyton for several months, as every other employee resigned from the agency, which reduced police department coverage to part-time. Coppola only recently hired one full-time officer and one part-time officer to work shifts outside of his own 8:00 a.m. to 3:00 p.m. window.

Coppola’s perceived inability to work with superiors echoed into his complaints against former Mayor Jeff Lariscy and Coppola’s announcement last fall of his intent to file a lawsuit against the city for defamation after it was discovered that he lied during an investigation, had missing documentation from his personnel files, and demonstrated repeated insubordination.

Coppola was not present at the first council meeting in January and did not prepare a report for police activity for the month prior for council members to review. The February council meeting is set for Tuesday, February 11th at 7:00 P.M. 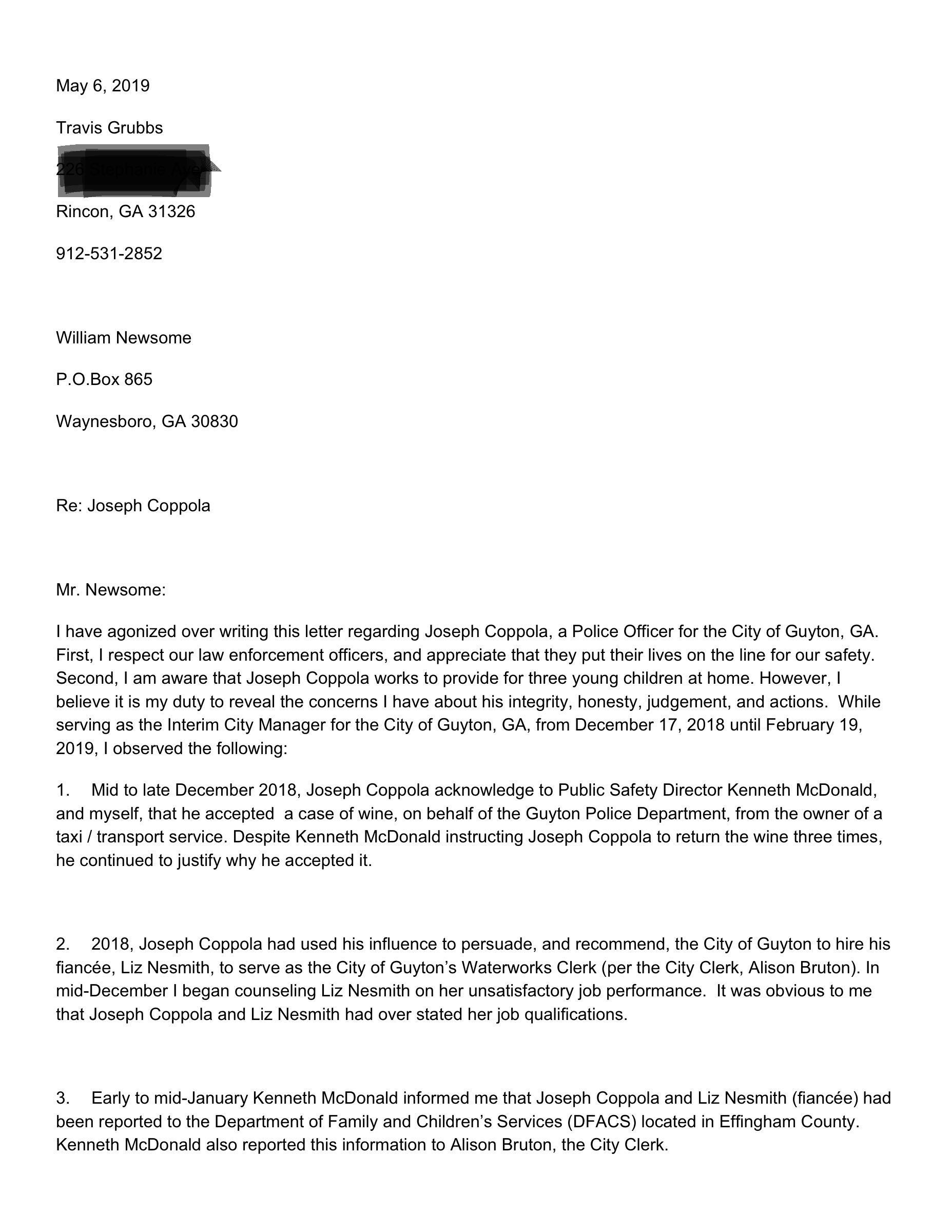 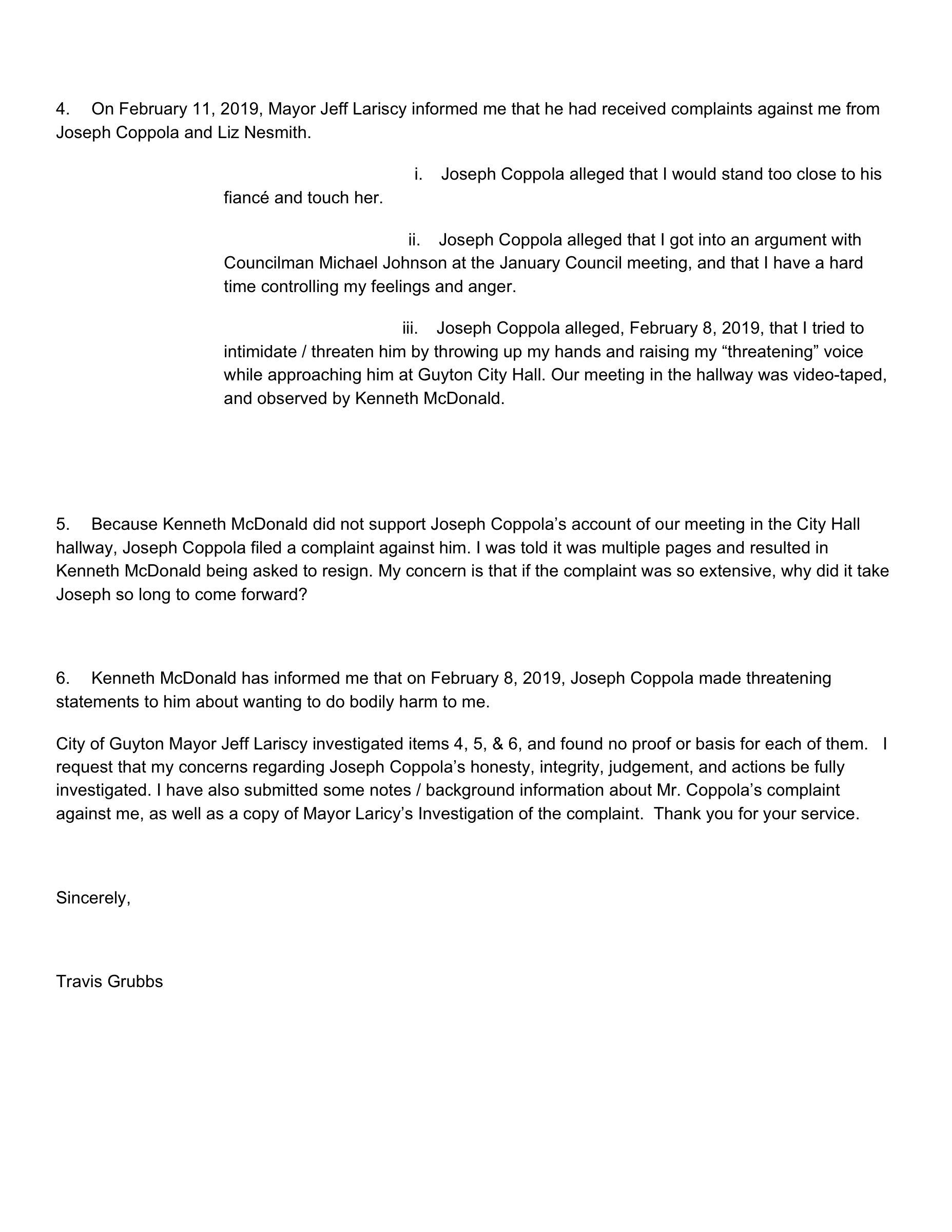