The Georgia Attorney General’s Office has opened an inquiry into the City of Guyton after a complaint was filed over a lengthy delay in providing public records.

The Georgia Attorney General’s Office has opened an inquiry into the City of Guyton after a complaint was filed over a lengthy delay in providing public records.

AllOnGeorgia filed an Open Records Request on a number of items pertaining to the Guyton Police Department on October 18th. Former city employee Alison Bruton, who was acting interim city manager at the time, provided several documents to AllOnGeorgia within the three day period as prescribed by law. Review of the documents, however, indicated that some items may be missing from both the personnel file of the employee and/or police department records and further explanation and clarification of what was being sought by AllOnGeorgia was provided. Bruton indicated she would work on tracking down the files, but less than a week later, former city manager Daniel Hofman was reinstated to his position and Bruton was no longer the point of contact for the request.

During the month of November, AllOnGeorgia sent follow-up emails and phone calls in an attempt to contact Hofman, but none of those calls or emails were ever returned.

On December 11, almost two months from the filing of the initial request, AllOnGeorgia filed a complaint with the Attorney General’s office, noting that the delay – after two months – appeared to be intentional. While government entities may have time beyond the three day period to provide more in-depth records, the time period must be reasonable and include an ‘end date’ for expected date of fulfillment. The City of Guyton has not adhered to that standard.

Deputy Attorney General Jennifer Colangelo sent a letter to city attorney Ray Smith on Friday, December 20th requesting that he provide an explanation for the delay as well as any documentation available. The standard response time imposed by the state is usually 10 business days, but due to the holiday, Smith has an extended period.

Just this week, the first ever criminal prosecution related to the Georgia Open Records Act resulted in a ‘guilty’ conviction by a jury in Fulton County. In years past, the sanctions for violations as determined by the Georgia Attorney General’s Office have been limited to the assessment of financial penalties on elected officials in the city and open government training for both elected and appointed officials.

You can read the complaint filed by AllOnGeorgia and the letter sent by the Office to the City of Guyton below. 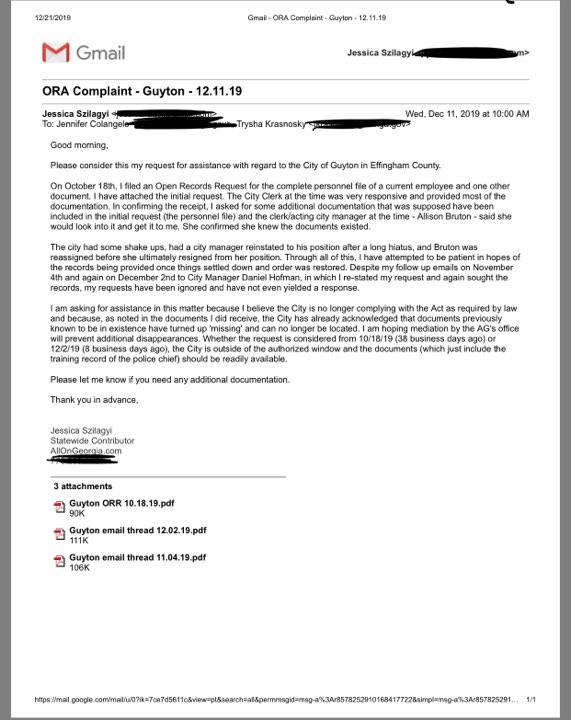