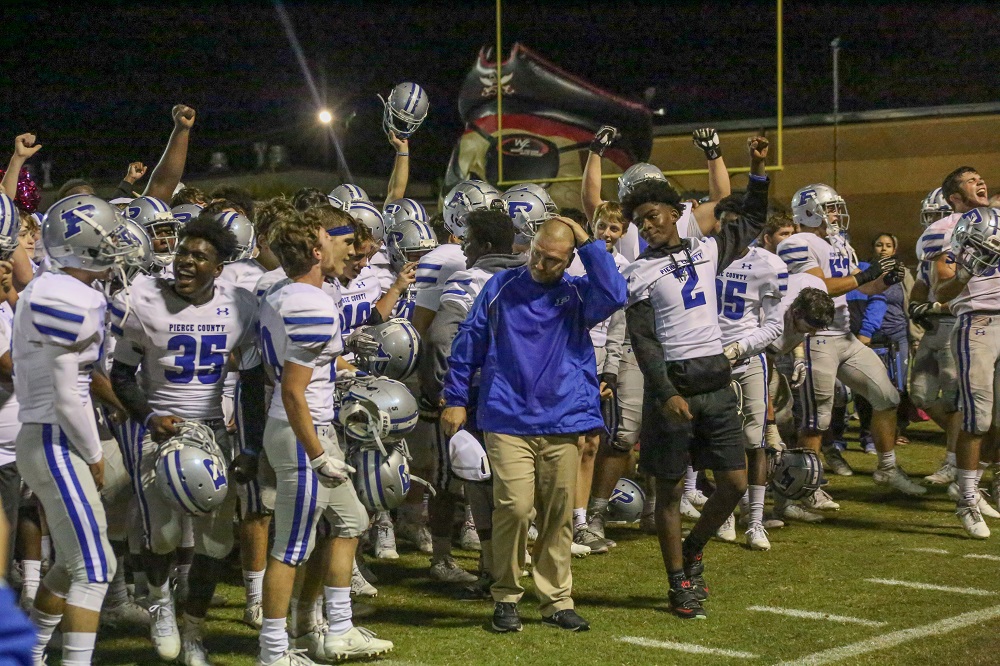 The Pierce County Bears pulled out an overtime victory Friday night in Baxley as they got past the Pirates 27-26 in one heckuva game.

The key Region 2-3A game ended with the teams tied 20-20 after the regulation 48 minutes.

In the overtime, the Bears got the ball first and scored on a 4-yard pass from Jermaine Brewton to Dee Bethea and Greg Benfield added the kick for a 27-20 lead.

Appling scored when it had the ball, too. Sharode Roberts crossed the goal line from the 2-yard line to make it 27-26. The Pirates lined up to kick the extra-point and extend the game into a second extra frame, but Pierce defensive back Deon Bell blocked the kick and sent the Pierce sideline into a wild celebration.

With the win, the Bears are now 9-0 for only the second time in school history. The last time they were unbeaten through nine games was the 1982 season.

Pierce is now 4-0 in the region and can close out a run to the outright region title with a victory next week against Liberty County.

Appling fell to 5-4 with the loss. The Pirates are now 3-1 in the region as they too came into Friday night unbeaten in region play.

Pierce led the Pirates 20-6 in the fourth quarter, but Appling came back to force the overtime. Quarterback Tyler Jones and Keyshawn Walker hooked up for two touchdowns to tie the score.

The first TD pass covered 60 yards just moments into the final period, but a two-point try failed and the score was 20-12.

Appling got the ball with just over two minutes to play after a fourth-down stop by its defense. The Pirates drove to the Pierce 40-yard line and Jones unleashed another bomb to Walker who caught the ball in the back of the end zone for the touchdown. This time, the Pirates converted their game-tying two point play to deadlock the score at 20-all with 45 seconds left.

Pierce tried to drive for a possible game-winning field goal, but time expired before it could take a shot at the victory.

The Bears scored the game’s first points on a pass from Brewton to Dakota Long early in the second period.

Pierce added a second score almost instantly after Appling fumbled the kickoff and Brewton threw a second TD pass to Johnny Waters for a 13-0 lead. The PAT was off the mark.

Appling got on the scoreboard with 2:49 to go before the half on a 5-yard run by Roberts to make it 13-6 at the break.

The Bears went up by the 20-6 margin when John Jones scored from 4 yards.

Jones finished the game with 87 tough yards on 25 carries. Brewton was 15-of-20 passing for 152 yards and the three touchdowns.

Walker had four catches for 142 yards for Appling.

Sophomore linebacker Austin Jerningan led the Bears with 11 tackles including two for loss.

The Bears will host Liberty next week.

In other games around Southeast Georgia on Friday, the results were as follows:

The Wildcats rallied to give themselves a chance for a huge upset in Valdosta, but a two-point conversion try was no good by Camden and the Vikings escaped with the Region 1-7A victory.

Camden trailed 28-7 going into the final quarter, but scored three times to come within a two-point conversion of knocking off the Vikings for their first-ever region win under second-year coach Bob Sphire.

Camden quarterback Logan Watson scored from 2 yards out with 9:15 to go in the game to make it 28-14 after the extra-point. Watson hit wideout Logan Berryhill for a 43-yard gain to set up his own score.

The Wildcats scored again after a missed field goal by the Vikings. Trace Dorminy threw an 80-yard scoring pass to a wide-open Berryhill to get Camden within 28-21 with just over five minutes to go.

When Camden got the ball back, an 86-yard pass from Watson to Shawn Hardy led to a 2-yard TD run by Jamie Felix with only 1:54 to play.

Skyler Strickland attempted a two-point pass to Berryhill, but it was high.

Lowndes recovered an onside kick by the Wildcats and ran out the remaining time.

Watson finished with 248 yards passing for the Wildcats in the loss.

Camden will host Tift County next week in the regular-season finale.

The Gators knocked off the Phoenix at Memorial Stadium in Waycross to get to the big one next week against Wayne County as planned.

The region rivals will play this coming Friday night in Jesup for the region title and top seed for the Class 5A state playoffs which open in two weeks.

The Jackets won the region crown last season. Wayne was off on Friday.

The Panthers rolled past the Indians in Folkston in a key Region 3-A matchup.

Both teams entered their annual rivalry contest with a 4-1 region record, good for a tie for second behind Irwin County in the league standings. Clinch also came into the game ranked second in the state behind Irwin while Charlton was ranked sixth in the public-school rankings for Georgia’s smallest class.

Clinch is now 8-1 overall with its loss to Irwin as its only setback. Charlton fell to 6-3 on the year.

The Panthers evened the all-time series between the teams at 28-28 with Friday’s victory.

The Panthers jumped ahead 21-0 in the first quarter, but the Indians came back to get within 21-14 at intermission.

However, the Indians would not score again as Clinch ran away for the convincing win.

The Indians close out the season next Friday at Lanier County.

The Panthers knocked off the Herons to keep their hopes for a region title alive.

Liberty is now 6-2 on the season and 3-1 in Region 2-3A games. The Panthers are now tied for second with Appling in the region standings. The Pirates defeated Liberty 34-0 in their season meeting.

Liberty will face Pierce next Friday to close out the season and could forge a tie atop the standings with the Bears with a win. That tie also could be a three-team tie if Appling were to defeat Tattnall County in its final game next week.

Brantley will finish out its season next Friday at home against Long County.

The Buccaneers got to taste victory for the first time under first-year head coach Tony Glazer with a big second-half comeback against Portal.

But, they would turn around the game with 32 unanswered points after the break to win race away for the victory.

MCA got a touchdown on its first touch of the third period from Isaiah Jason who dashed through the line and outran the defense for the score.

On its next series, McIntosh got a 48-yard TD run by Johnny Cummings.

Cummings would score two more times for MCA while Jason also added another TD late in the fourth period.

The Bucs managed only 42 yards in the first half while picking up just two first downs.

Cummings and Jason combined for 206 yards and six scores for McIntosh.

The MCA defense checked the Panthers to 56 yards after halftime while also forcing two turnovers.