Only one high school football game goes in favor of the Glynn County team on Friday night. 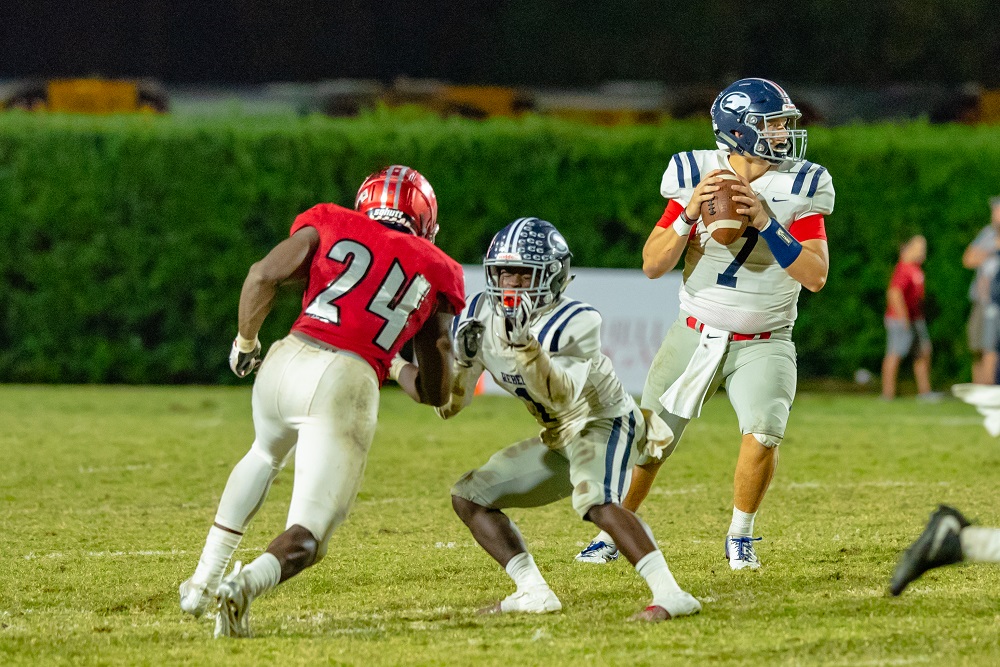 The Glynn Academy Red Terrors stayed on course to win another region championship Friday night with a 24-17 victory over Effingham at Glynn County Stadium.

Having won or shared the last three league titles, Glynn (6-3 overall, 3-0 Region 2-6A) can win this year’s region crown outright with a win next week at Bradwell Institute in Hinesville in the final game of the regular season.

A loss, though, and the Terrors could find themselves involved in a tie with the Tigers or a three-team tie that could also involve Richmond Hill if the Wildcats beat Effingham next week.

Bradwell knocked off Brunswick 41-14 Friday night and is now 2-1 in the region while Richmond Hill was off this week and is also 2-1 in the region. When three teams are tied and all have beaten each other – which would be the case here – the next tiebreaker is points allowed in region games up to a maximum of 25 between the teams involved in the tie.

With the loss to Glynn, Effingham fell to 5-4 overall and 1-2 region. Brunswick finished 0-4 in the league and won’t make the playoffs.

On Friday night, the Terrors went up 17-0 before the Rebels closed within a touchdown in the fourth quarter twice before Glynn could put away the game.

Glynn scored on the game’s opening drive when it paraded 80 yards and hit paydirt on a 13-yard run by Nolan Grant. Chase Gabriel added the extra-point for a 7-0 lead just 3:26 into the game.

Glynn went up by two touchdowns midway through period two when Quantavious Bostic took a reverse 14 yards to the house to finish off a quick three-play 57-yard drive by the Terrors. Gabriel added the PAT for a 14-0 cushion.

The Terrors closed a strong first-half with a 26-yard field goal by Gabriel as time expired on the large stadium scoreboard. Glynn got the ball back with 1:35 to play before halftime after Byron Bacon partially blocked an Effingham punt from its own 37 which allowed Glynn to take over at its own 49-yard line.

Effingham did make it interesting after it scored with 1:44 to go in the third period on a 6-yard run on third-and-goal by Zach Garcia to get the Rebels on the scoreboard and make it a 17-7 game going into the final 12 minutes.

Early in the fourth, the Rebels hit a 50-yard play down to the Glynn 6, where Travis Clinch made a touchdown-saving tackle. The Rebels got to the GA 2, but went backward with a loss on second down and a 5-yard penalty before an incomplete pass on third down that was broken up in the end zone by Jaiden MIller for Glynn.

Effingham opted to take the field goal which was good from 25 yards by Zach Thomas to make it a 17-10 game with nine minutes to go.

Glynn went three-and-out on its next series, and Effingham would take over at the Glynn 47 following a punt. But, that’s when GA senior linebacker EJ Thomas single-handily stymied the Rebels. He dropped quarterback Jerid Stokes for a sack on first down, made a tackle at midfield on second down and then sacked Stokes again on third down to force an Effingham punt.

Mike Brinson – Caden Hutchinson runs the ball for Glynn Academy. He scored on a 25-yard run for the Red Terrors in the win.

The GA offense would then drive 83 yards to score on 25-yard run by Caden Hutchinson which followed a 58-yard scamper by Grant.

GA recovered the onside kick, and after inducing an encroachment penalty on the Rebels on third-and-4 in the final moments, Glynn gained a free first down and was able to run out the clock from the victory formation.

“We played really good at times tonight, but not so good other times,” said GA coach Rocky Hidalgo. “I think we’re getting closer to being pretty good, and I feel like our best football is still in front of us.

“I thought our backs ran better tonight and the offensive line blocked better. We wanted to eat clock in the second half, but we had too many execution errors and negative plays that we have to correct.”

The victory was the 12th in a row for Glynn over Effingham.

Glynn honored its senior players prior to the game as part of its Senior Night festivities.

Also in games involving Glynn County teams, the results were as follows:

The Pirates saw their season come to a disappointing close with the lopsided-loss to the Tigers at Olvey Field.

Brunswick had to win the season finale at Bradwell to have a chance to make the playoffs as Region 2-6A’s fourth seed.

Brunswick finishes its second season under head coach Sean Pender with a 3-7 record. The Pirates lost all four of their region games.

Brunswick started fast, scoring on a 25-yard run by senior Jaylen Trimmings for an early 7-0 lead after the extra-point kick. The opening drive by the Pirates was 65 yards.

The Pirates, though, could not stop Bradwell senior running back Kevin Harris who finished the night with five touchdowns.

The Tigers scored again in the third quarter for a 27-7 lead before BHS quarterback KJ Lee scored from 3 yards to make it 27-14.

It was all Bradwell from there, however, as Harris scored two more touchdowns for the Tigers who pulled away for the convincing win.

“We missed a lot of opportunities, and defensively we couldn’t stop Bradwell all night long,” Pender said.

The Pirates will now go into offseason mode next week.

“We’ve got to put a lot of work in,” Pender said. “We’re going to hit the weight room hard and get stronger. We’ve got to learn what to do and how to play the game like it’s meant to be played.”

The Knights fell hard as they absorbed an overtime loss to the Trojans at home on St. Simons Island.

The game was decided on a failed two-point conversion attempt for the Knights who scored to pull within 14-13 on their overtime possession and opted to go for two points and the win. A pass attempt fell incomplete which ended the game and gave the Trojans the win as they moved to 9-0 on the season.

“It was close. I thought we had it,” said FA coach Brandon Derrick of the two-point try. “I thought we caught the pass, but the officials said we trapped it.”

The Knights lost their second game of the season against Valwood when they also misfired on a two-point attempt in overtime.

Now 6-3 on the year, Frederica had won six in a row since that loss to Valwood before falling again to John Milledge.

Frederica went up 7-0 early in the first quarter on a pass from Jaylin Simpson to Jaiden Rose.

The Trojans didn’t get on the board until the third quarter when a Frederica mistake on special teams led to a visitors’ touchdown.

John Milledge had a chance to win in regulation, but Patrick Brunson broke up a fourth-down pass to stop a scoring threat.

The Trojans got the ball first in overtime and scored a touchdown before adding the extra-point.

Denver Anthony caught a pass on third-and-3 from the 6 from Simpson for Frederica’s touchdown in overtime.

Friday’s game was a non-region game for the Knights. They go to Bulloch Academy to face the rival Gators next Friday in a game that will decide the Region 3-3A title in the Georgia Independent School Association.

“We’re still in the same position,” Derrick said. “We have to put this one behind us and get ready to go play Bulloch.”