Glynn Academy looks to defend league title in region race that could be interesting all way to the finish line. 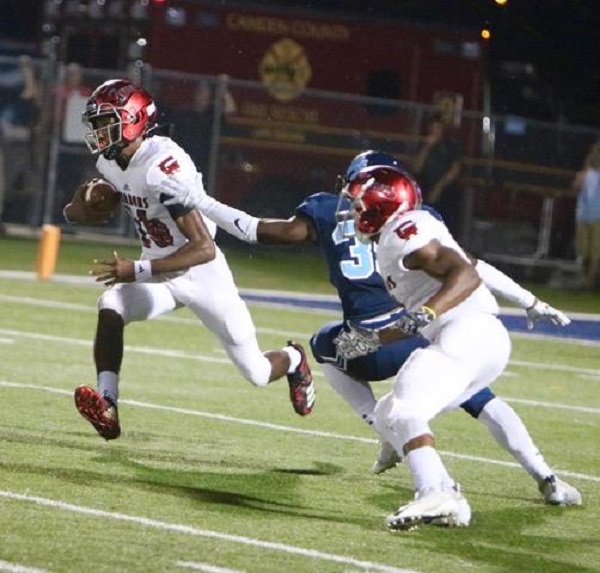 The Region 2-6A schedule kicks off with a pair of games Friday night.

One will be Bradwell at Effingham in Springfield, and the other will be Richmond Hill at Brunswick inside Glynn County Stadium.

The Glynn Academy Red Terrors, who are the three-time defending champions, have the night off and will open their league schedule next week.

Some believe that Glynn is still the team to beat in the region, though the Terrors are 3-3 on the season but really have only won two games on the field as they received a forfeit victory over Fort Dorchester (S.C.), the team that beat them the first week of the season.

GA head coach Rocky Hidalgo doesn’t mind the Terrors getting labelled as the favorites. He still has high hopes for his team despite its early-season struggles.

“Someone’s gonna win the region and go win some games in the playoffs, so it might as well be us,” Hidalgo said.

But, no one is willing to hand the region title to the Terrors as they certainly aren’t invincible. The region title looks to be up for grabs along with the four playoff spots.

The next five weeks and the 20 region games that will be played in that span will decide the region champion and subsequent seeds for the state playoffs which begin on Nov. 9. Four teams will qualify for the playoffs while one team will miss out on the postseason party.

“I don’t think anyone’s real good right now,” Hidalgo said when asked to break down the region. “I think everyone has flaws. Whoever can do the best job of fixing their flaws, hiding them, concealing them or whatever, will have the best chance to win the region.”

In the non-region portion of the schedule, only Effingham made it through with a winning record. The Rebels are 4-2 on the season, but the teams they have beaten are a combined 5-18 for the season.

Along with Glynn, Brunswick is also 3-3, Bradwell is 2-4 and Richmond Hill is 2-3 while losing a game due to weather concerns related to Hurricane Florence.

“The region is up for grabs,” said Brunswick coach Sean Pender. “Anyone can beat anyone. I believe we can play with anyone in the region, but could also lose to anyone. It’s up in the air. I know we have played better the last two weeks, but also know we still need to play better in all phases of the game.”

Brunswick faces a Richmond Hill team in Friday’s region opener that lost senior Aaron Bedgood to a season-ending knee injury early in their game against Camden County on Sept. 7. Bedgood, a Coastal Carolina commit, was an all-purpose threat for the Wildcats who used him at quarterback, running back, receiver and in the return game.

“He was the best offensive player in the region, so that makes it tough,” said Richmond Hill coach Matt Lezotte. “We didn’t have to scrap what we were doing or redo a lot, but it just became a matter of which guys would step up and which ones would make plays.”

The Wildcats ended up losing 33-6 to Camden, and after having their game the nest week against New Hampstead cancelled by the hurricane threat, they lost 22-12 the following week to Liberty County.

Last week, the Wildcats got back in the win column with a 52-6 victory at Bluffton (S.C.).

“We’ll just go out and play and see how it shakes out,” Lezotte said of the region race. “We’ve seen every team on film, and each team looks like it does things well and also makes mistakes, a lot of them because of their youth.”

Bradwell certainly made its fair share of mistakes in its opening game as turnovers doomed the Tigers in a 23-15 loss at Dodge County. The Tigers saw their defense get shredded the next week in a loss to rival Liberty County and its standout running back Kris Coleman.

The Tigers also lost 50-0 to Valdosta before winning back-to-back games against Tattnall County and Long County by a combined score of 76-8.

Last year, the Tigers went 6-0 against an easier non-region schedule but lost all four of their region games. This year, Bradwell coach Ross Couch tried to toughen up the early-season schedule to hopefully also toughen up his team for the stretch run.

“The game got too fast for us last year when we got into the region,” Couch said. “This year, hopefully we’re more prepared for the game speed and tempo we are going to face.”

The Tigers have one of the best players in the region in senior running back Kevin Harris who is committed to South Carolina. The 5-foot-11, 215-pounder has the ability to take over a game and figures to give the Tigers a chance in all of their region games.

Coach says, though, his team can’t be one dimensional and expect to win regularly.

“Teams obviously know about (Kevin),” the coach said. “We’ve got to be able to throw the ball, spread people out and make them defend us vertically and from sideline to sideline. If we are able to do that, hopefully we can then take advantage of the numbers inside the box.”

Couch hopes his Tigers can be a factor in the region race this season, but he knows they have their work cut out for them starting with the opening game against Effingham in Springfield which is never an easy place to play.

“Effingham has some dynamic guys on offense, and they’re always going to be physical,” he said.

“I think athlete-wise, speed-wise, strength-wise, most of us in the region match up pretty well. It’s always going to come down to who makes the least amount of mistakes.”

Glynn’s Hidalgo seems to agree with that and has seen the Terrors make plenty of them. The Glynn offense has sputtered due to injuries in the line and lack of execution by young players who are still learning the ins and outs of the team’s option offense.

As a result, Glynn scored only 14 points three weeks ago in a loss at Wayne County, and the last two weeks managed to score only one touchdown in each of their losses at Ware and Camden counties.

The Terrors have proven vulnerable on defense and special teams also, having given up big runs for touchdowns and turning over the ball in the kick return game which has led to good field position and points by the opposition.

Hidalgo said the Terrors are going back to the drawing board this week and have a plan in place for the rest of the season to hopefully make their offense more productive. He wouldn’t specify what that plan is, though.

“My goal is to be the Red Terrors,” he would say. “That’s my objective.

Last season, Glynn and Brunswick both finished with one league loss each, but the Terrors were awarded the region’s top seed for the playoffs based on their head-to-head victory over the Pirates.

The Terrors actually lost to Richmond Hill the week after defeating the Pirates. Brunswick then turned around and knocked off the Wildcats to create a three-way tie for first in the standings going into the final week of the regular season. Brunswick had the upper hand in the tiebreaker and it looked like BHS would end up as the No. 1 seed for the playoffs.

However, the Wildcats would lose again to Effingham in their season finale. That put Glynn in the top spot with Brunswick settling for the second slot and Effingham getting the third slot with two league losses and Richmond Hill falling all the way to the fourth spot with two region losses.

Following the region madness, Glynn went to the state semifinals before losing to eventual state champion Lee County. Brunswick fell in the first round to Northside, Effingham also lost in round one to eventual state runner-up Coffee and Richmond Hill dropped an eight-point game to Lee in its playoff opener.

This year, Region 2 will meet Region 3 in the opening round. In that region, comprised of Augusta area schools, no team currently has a winning record.

Here in Southeast Georgia, though, how Region 2 will shape up is really anyone’s guess going into the first week of region games.

But still, the goal is to try and knock the Terrors off the top of the mountain.

“Glynn plays with so much confidence that they think they are gonna win every game and win the region,” Couch said. “That confidence puts them into position to be successful.

“The rest of us, we have to battle, minimize our mistakes and play tough, physical football. If you can do that, you’ll have the chance to win on Friday night.”