Red Terrors and Rebels will play between the Glynn County stadium bricks. 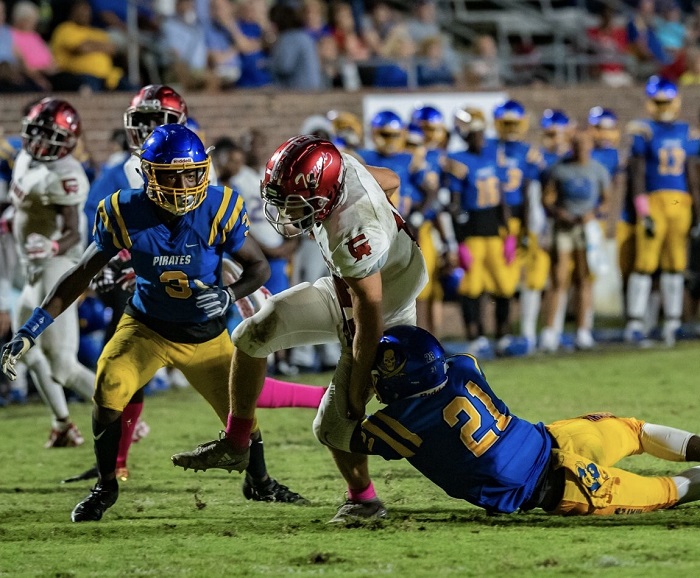 The Glynn Academy Red Terrors played in front of the largest crowd of the season last Friday when they toppled rival Brunswick in the annual City Championship Game at Glynn County Stadium.

This Friday, the Terrors could play in front of the smallest crowd of the season when they host Effingham for a Region 2-6A game as the Georgia-Florida revelry on St. Simons and Jekyll islands usually hurts the attendance at a home high school game on the same night.

No matter the size of the crowd, though, Glynn is preparing to face a hard-nosed Rebels team that will come this way from Springfield for Friday’s meeting with the Terrors.

“Year in and year out, they’ve been the most sound team in the region we play,” said Glynn coach Rocky Hidalgo. “Their kids play really hard. They get after it and do a good job.”

The Terrors come into the game with momentum, having won each of their first two region games. They dominated Richmond Hill with strong defense in a 28-3 victory three Fridays ago and last week went up 17-0 on Brunswick in the fourth quarter before the Pirates made a late push to make it a 17-12 final.

With the two league wins, Glynn is 5-3 overall going into the final two weeks of the season. Next week, they play at Bradwell Institute to close out the season schedule.

Effingham is also 5-3 coming into the game. The Rebels have split their first two region games as they lost at home to Bradwell before knocking off Brunswick 45-14 two weeks ago at home. The Rebels had an open date last week.

Effingham runs a pro-style offense and gives the defense multiple looks, according to Hidalgo. He said the Rebels’ forte is lining up in the I-formation and trying to run the football.

“They’ve got a couple of guys they hand the ball off to, but their quarterback throws it pretty well, too,” the GA coach noted.

The quarterback, Jerid Stokes, is 36-of-75 passing for 539 yards and six touchdowns. He has thrown four interceptions.

The Rebels average 27 points per game while Glynn is averaging just over 23 a game.

Last week against Brunswick, the Terrors scored on their opening possession and didn’t score again until kicking a field goal to start the fourth quarter for a 10-lead. Glynn put another TD on the board in the final stanza before the Pirates made their late rally.

Sam Wagner made his second straight start at quarterback last week for Glynn, but sophomore TJ Lewis who had been the team’s starter still took some snaps at quarterback and continued to run the ball for Glynn. He actually scored both of the Terrors’ touchdowns against the Pirates.

Wagner figures to start again with Lewis seeing time as a receiver and at quarterback, but Hidalgo did not officially name Wagner the starter for Friday’s game.

“Come out and see,” he said when asked who would start while reiterating that both Wagner and Lewis would get snaps. “We’ve got some plays with Sam and also some with TJ. It just depends on how the game is going.”

Glynn’s offense has been hampered by injuries and execution mistakes much of the season. Against Brunswick, the Terrors had more consistency in execution, but penalties killed drives and kept the offense out of kilter a good bit of the game.

Effingham usually lines up in a 3-5 set, Hidalgo said.

“They are really good on the second level,” he said. “Their linebackers play hard. Their defense runs around and plays hard.”

Glynn has won 11 in a row against the Rebels including four straight under Hidalgo.

The Terrors will honor their seniors prior to kickoff Friday night as the game is the final home game for Glynn in the regular season.