Knights and Valiants meeting in quarterfinal round on Friday night. 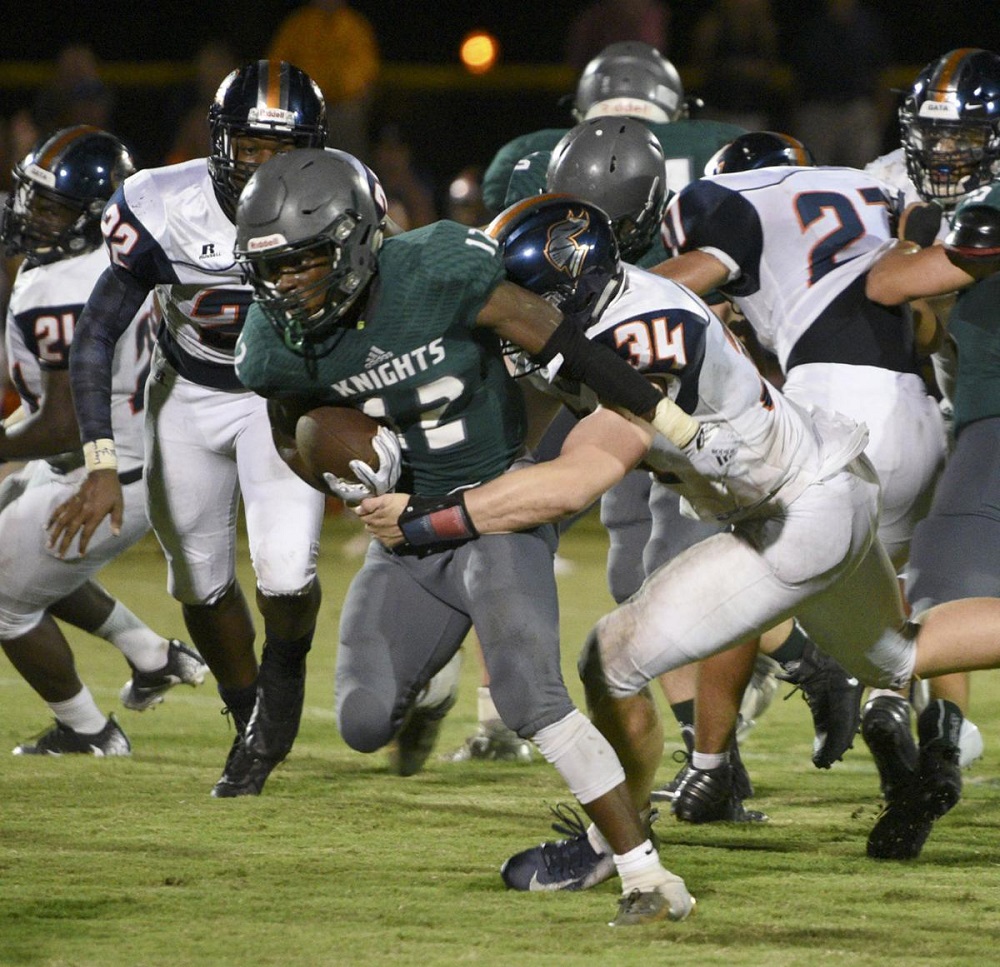 So, here we go again.

Frederica Academy will square off against Valwood once again on St. Simons Island as the two Georgia Independent School Association powers meet Friday in a Class 3A quarterfinal game.

For the Knights, a home date with the Valiants is a scary proposition as the last two games played between the teams on the island have brought heartache to the FA program.

Last year in the state semifinals, Valwood scored a game-winning touchdown with 23 seconds left in regulation to win 14-10 and advance to the state championship game which it won the next week.

The touchdown was set up by a high punt snap by the Knights from their own 32-yard line and Valwood got the ball at the Frederica 6. The Valiants threw a pass for the winning touchdown on fourth down from the 4.

The Knights and Valiants also faced off back in August in the second game of the regular season with Valwood winning 7-6 in overtime after the teams battled to a scoreless tie in regulation.

Valwood scored a touchdown and kicked the extra-point on its first overtime possession. The Knights answered with a touchdown, but decided to go for two points and the win, but did not convert on the play.

There was controversy late in the fourth quarter when the Knights felt they had caught a pass at the Valwood 2-yard line that could have set them up for a touchdown to win in regulation, but the officials ruled the pass incomplete.

Frederica was also flagged for two unsportsmanslike conduct penalties following the the play as FA players argued with the officials about the ruling. The penalties cost the Knights field position at a critical juncture in the game.

That loss to the Valiants on Aug. 24 was another tough pill for the Knights to swallow as they fell to 1-4 all-time against Valwood.

It’s not like the Knights can’t beat Valwood, though. Frederica defeated the Valiants 24-13 in an early September matchup back in 2016.

On Friday night, it will be do or die for both sides as the winner keeps its hopes alive for the 2018 state crown and the loser makes an early playoff exit.

“Lose this one and you go home. It’s different now than it was the second game of the season,” said FA coach Brandon Derrick.

The Knights (7-3) had a bye last week in the first round as the Region 2 champion.

Valwood (9-3) had to play in the first round as the No. 3 seed from Region 3 and the Valiants rolled past Augusta Prep 35-12 to advance to this week’s quarterfinals.

The Knights spent time last week installing a game plan for Valwood while working under the assumption that the Valiants would win last Friday.

The main chore for the Knights will be to stymie Valwood’s ground-and-pound offense again. Frederica plans to give Valwood some different defensive sets in this game, though the defense stood tall back in August against the Valiants.

“We’re not doing a ton different, just giving them some different looks with the same personnel on the field,” Derrick noted.

The Knights will keep with their usual plan on offense, according to Derrick.

“It’s the same plan – play fast, get the ball on the perimeter and maintain blocks,” he said. “We’ve put in a few schemes that we think can give them problems.”

Frederica played that earlier game against Valwood short-handed as several starters missed the game with injuries. One of those was senior quarterback and Auburn commit Jaylin Simpson who missed the Valwood contest and several others with a toe injury.

Simpson brings play-making ability to the offense, of course, but the Knights are hoping an improved offensive line will be the biggest plus for the Knights in this second game against the Valiants.

Of course, Friday’s high-stakes contest figures to be a hard-hitting affair and perhaps a battle a of attrition that will be won by the one that survives it the best.

The Knights appear to be better-fitted for the battle this go-around, but will that lead to a different outcome? That’s the million-dollar question.

“Valwood is going to give everything they’ve got. They’ll be ready to play. We’ve got to answer the bell,” Derrick said.