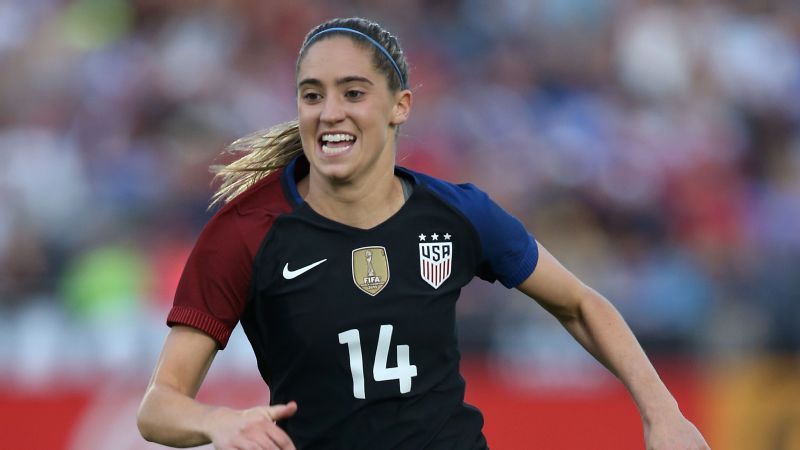 The women’s friendly soccer match Thursday night between the United States and Mexico amounted to a Homecoming for Morgan Brian.

The St. Simons Island native and former Frederica Academy soccer standout got the chance to play close to home for the first time as a member of the national team as the U.S. defeated Mexico 4-1 at EverBank Field in Jacksonville, Fla.

The match drew 14,360 fans and many of them were there in support of Brian, the local favorite.

“We have been communicating with friends from St. Simons Island, Brunswick and Jacksonville, and there will be very good attendance from all,” said Steve Brian, Morgan’s father, before boarding a plane Thursday afternoon in Atlanta to make the trip to North Florida to see his daughter play.

Her parents make their home in Atlanta nowadays, but Brian got her start in soccer playing on St. Simons Island and also in Ponte Vedra, Fla., home of her club team, while being part of the Olympic Development program as a teenager.

At age 22, Brian was the youngest member of the U.S. team that won the Women’s World Cup in 2015. She started every game in the midfield for the national team.

Brian, now 25, was selected to the 22-player roster that would make the trip to Jacksonville for the first of two matches against Mexico in late March.

She spoke to the media about her return to the area during a Wednesday press conference as the U.S. players took a break from training to talk with reporters.

“It’s the first time I’ve played [for the national team] in Jacksonville. It’s where I grew up, it’s my stomping grounds, and so it’ll be a lot of fun to play in front of a lot of friends and family,” Brian said.

Brian has been struggling with her play for a good portion of the last year as she has been hampered by injuries. However, she has been playing better in recent weeks and hopes to keep moving forward as the U.S prepares for the World Cup qualifying matches in October.

“It’s been a rough year, and I think every athlete goes through periods like this, just weathering the storms,” Brian said. “I think at this point in time, hopefully I’m past that period.”

“The glimpses I saw of her [in March’s SheBelieves Cup], it felt like she’d turned a corner,” Ellis said. “I’m excited to see where she’s headed.”

Brian started in the midfield for the Americans in Thursday’s victory over Mexico which moved the U.S. to 4-0-1 thus far in 2018. It was her second start of the year for the team as she also started and played all 90 minutes in a match against France on March 4.

Against Mexico, Brian fired the first shot on goal for the U.S. just moments into the match, but her shot was saved by the goalkeeper.

The Americans scored just minutes later and would lead 1-0 at halftime. The U.S. built a 4-0 lead in the second half before Mexico connected for its only sore of the night 64 minutes into the match.

When she isn’t with the national team, Brian is now playing professionally in France for the European champion Olympique Lyon which just last week qualified for the semifinals of the UEFA Women’s Champions League.