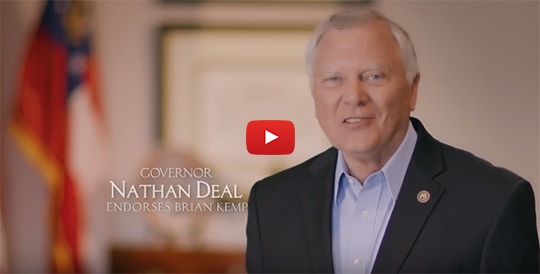 Georgia’s top leader for the last eight years is throwing his support behind Republican candidate for Governor Brian Kemp in hopes that Kemp will keep Georgia on the same track.

Over the last several weeks, Democratic candidate Stacey Abrams has released television ads promoting her alliance with Deal on justice reform and other issues, touting a bipartisan record in the Georgia legislature.

In a press release issued with the ad, Kemp said:

“I am honored to have Governor Deal’s strong support in this historic race. As governor, I will build on the Deal legacy. We will continue to grow jobs, lower taxes, invest in public education, promote early learning, protect the HOPE Scholarship, and lead in criminal justice reform.

“Thanks to Republican leadership at the State Capitol, our state is the best place to live, work, build a business, and raise a family. As governor, I will work around the clock to keep Georgia moving in the right direction.”