Carr appeared on CNBC’s “Squawk Box” to discuss how he is working to ensure President Biden’s American Rescue Plan Act does not commandeer Georgia’s ability to cut taxes. 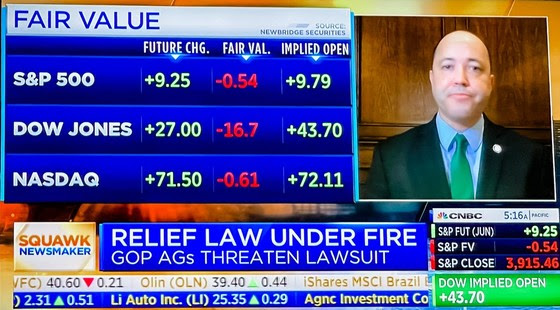 “As it is written, the American Rescue Plan Act could be used to deny Georgia the ability to cut taxes in any manner for years to come,” said Attorney General Chris Carr. “That would be unacceptable. In fact, it would amount to an unprecedented federal takeover of state tax policy and would represent the greatest attempted invasion of state sovereignty by Congress.”

Certain provisions of the Act forbid states from using COVID-19 relief funds to “directly or indirectly offset a reduction in…net tax revenues” resulting from state laws or regulations that reduce tax burdens, whether by cutting rates or by giving rebates, deductions, credits, “or otherwise.”

Attorney General Carr and his colleagues are urging the Treasury to adopt a narrow interpretation of the language, warning that a broad interpretation would result in an unprecedented and unconstitutional intrusion on the sovereignty of the States. For example, a broad interpretation of the Act could prohibit two separate tax-relief measures currently under consideration by Georgia’s General Assembly: an extension of a tax credit for Georgia families who adopt a child out of foster care, and an increase to the standard deduction, which would provide Georgians with an estimated $140 million in state income tax relief that largely benefits those of lower to middle incomes.

The attorneys general also warn that a single governor could accept stimulus funds and thereby bind both the state legislature and a future successor from cutting any tax or tax assessments in the near future. This would be a clear intrusion by Congress upon the democratic structures of the States.

Accordingly, Attorney General Carr is asking the Treasury to confirm by March 23 that the Act does not prohibit States from generally providing tax relief, and that the Act simply precludes express use of the relief funds to provide direct tax cuts. The attorneys general will take further appropriate action if such an assurance is not provided to ensure that states like Georgia have the clarity and assurance needed to enact and implement sensible tax policies for the taxpayers of Georgia.

"An 11th hour provision was put in that says basically you can't use any of these funds directly or indirectly for tax and revenue purposes in the states," says @Georgia_AG. "We need more than a statement to make sure this isn't going to be a tax cut ban on our states." pic.twitter.com/HK4OEj2iHv