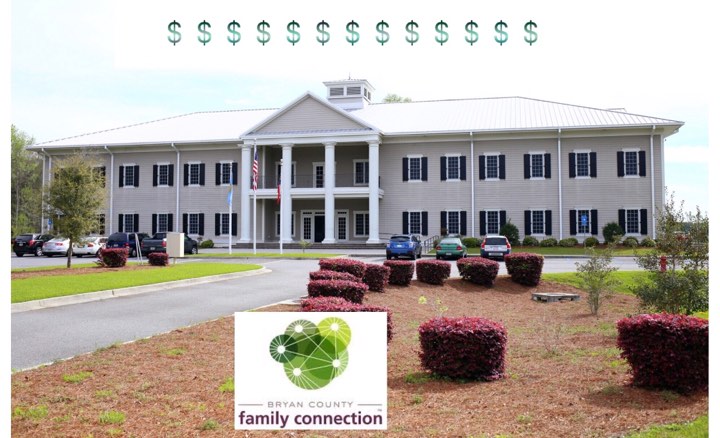 The information became public Wednesday during a workshop for the Local Victim Assistance Program (LVAP) Funds committee at which applicants seeking county funding appeared before a panel appointed by the Bryan County Commissioners.

During a presentation by Helen’s Haven of Liberty County, Bryan County Finance Director John Rauback asked if the nonprofit had been or was currently receiving any money from Bryan County.

Terri Liles of Helen’s Haven, who made the presentation Wednesday, said the organization had received $3,000 a year from the Commissioners for several years. Rauback then asked if the money was from the Atlantic Judicial Circuit, to which Liles replied that it was not from the judicial circuit, but was appropriated annually by the county commissioners. In her comments, Liles said no money had been received in 2019, though, because Helen’s Haven had ‘not asked for it yet.’

What Liles did not mention is that the $3,000 comes from the Bryan County Family Connection budget. The Executive Director of Bryan County Family Connection is Wendy Sims, who also sits on the LVAP Committee appointed by Commissioners. Helen’s Haven is also listed on the website as a ‘partner’ of BCFC and Wendy Sims signed off on the invoices, which approved the funding requests to the county. Neither Liles nor Sims mentioned to the committee that it was Sims’ budget, appropriated by Bryan County, that funded the $3,000 stipend for the 501(c)3 charity that Liles represents. 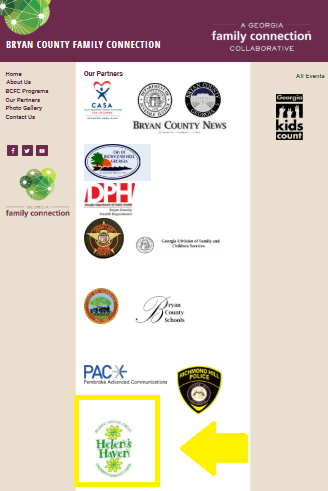 The Bryan County Family Connection (BCFC) website says that the BCFC programs range from juvenile diversion and a teen center to children’s gifts to the needy, a summer lunch program, and a field day. Also on the program list is “Project Lifesaver,” a search and rescue program for those with Alzheimers and Autism. The website does not make mention of any program that would justify the funneling of funds to Helen’s Haven,  which provides services to victims of abuse. None of the statewide initiatives of Georgia Family Connections Partnership, the parent organization of BCFC, justify the funding to Helen’s Haven either.

AllOnGeorgia filed an Open Records Request on August 7, which revealed that the monies sent to Helen’s Haven are listed as ‘financial support services.’ From 2012 to 2018, Bryan County directed $14,400 to Helen’s Haven. County Clerk Donna Waters said in an email that the “payments were paid out of the Family Connections budget” and requests made to Commissioners by Wendy Sims listed the funds as a “donation.” Checks display “Bryan County Board of Commissioners” as the account of record.

At least six of the donations were ‘sponsorships’ of Helen’s Haven events, including an annual 5K Run and Walk. The only mention by Helen’s Haven of a BCFC service appeared in a 2015 funding request, citing the “distribution of prevention information” to children and adults at the Teen Center.

AllOnGeorgia also asked for a copy of the contract for services Bryan County executed with Helen’s Haven, which would detail services the nonprofit provides to the county in exchange for the appropriations. The Open Records Request response said, “We do not have a formal contract in place with Helen’s Haven.”

The problem: the diversion of tax dollars to a nonprofit like Helen’s Haven is a violation of the gratuities clause in the Georgia Constitution and donations on behalf of a government entity are not just frowned upon, but are strictly prohibited.

The funding to the Bryan County Family Connection was created by an act of the legislature applying to all 159 counties and is an arm of the Commissioners, which means the gratuities clause does not apply. Bryan County’s funding to Helen’s Haven, however, does not meet any of those standards. The lack of contract outlining services received only reiterates that none of the standards apply.

The issue with a private entity receding tax dollars is that it opens the door for others to request the same, since governments cannot apply the law unequally. Any nonprofit requesting $3,000 from the Commissioners would be worthy of such an appropriation. Additionally, an organization or a Bryan County citizen could sue the county to have them retrieve what was wrongfully paid out to Helen’s Haven over the years.

Vic Reynolds, former Cobb County District Attorney turned Director of the Georgia Bueau of Investigation, has lobbied to make gratuity clause violations a criminal offense. ““In circumstances where gratuities have been paid … and it’s not proper, absolutely it needs to be a criminal prosecution and criminal statutes,” Reynolds said.

You can read the documents provided by Bryan County below. A screenshot of the email fulfilling the records request is also included due to Bryan County’s denial that Open Records Requests have been filed and filled in the past. 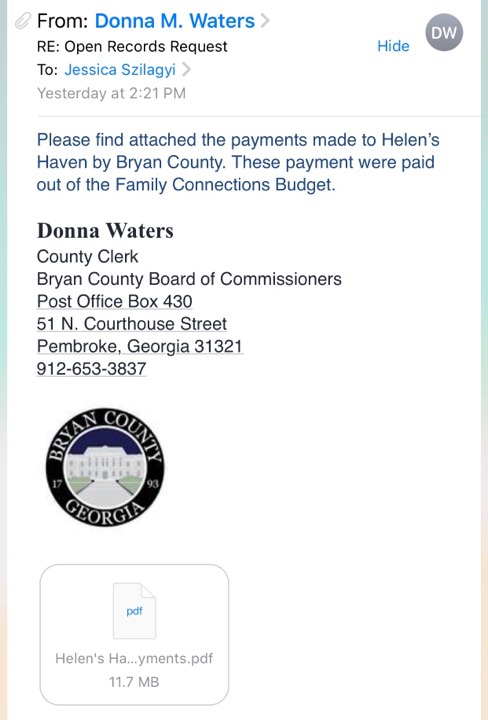