Jody Hice has announced he is a Republican Candidate for Secretary of State in Georgia.

Jody Hice has announced he is a Republican Candidate for Secretary of State in Georgia.

“Free and fair elections are the foundation of our country. What Brad Raffensperger did was create cracks in the integrity of our elections, which I wholeheartedly believe individuals took advantage of in 2020. Though I am encouraged to see the General Assembly taking it upon themselves to address some of the glaring issues in our elections, Georgia deserves a Secretary of State who will own the responsibilities of the office. If elected, I will instill confidence in our election process by upholding the Georgia Constitution, enforcing meaningful reform, and aggressively pursuing those who commit voter fraud.

Every Georgian, in fact, every American has the right to be outraged by the actions and, simultaneously, the inaction of our Secretary of State. Our state deserves a leader who steers clear of scandals and focuses on the incredibly important duties of the office. If elected, my top priority will be ensuring every Georgian’s legally cast ballot is counted in future elections. I am excited about our campaign and I know together we can renew integrity,” Hice said in his announcement.

Hice has already picked up the endorsement of former President Donald Trump. 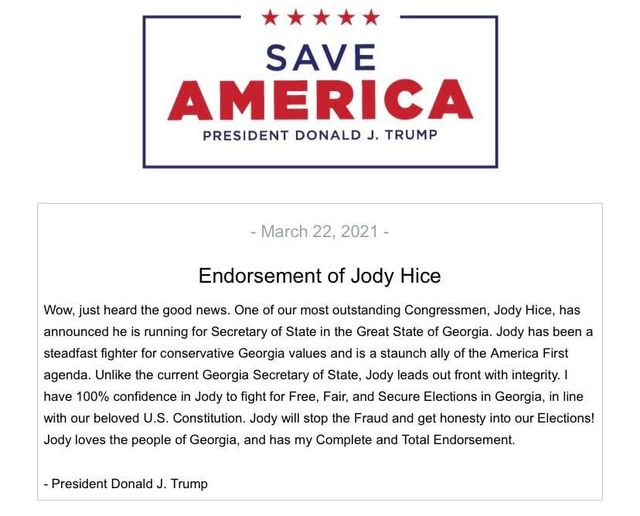