The Peach State joins nineteen others in not regulating whether or not adults in the back seat must wear a seat belt.
The committee also recommended allowing juries to consider if someone was wearing a seat belt or not when assessing comparative fault. 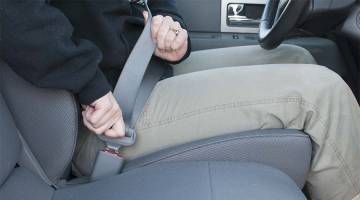 Georgians could see enhanced seat belt laws if the legislature takes up the recommendations made recently by a Senate study committee.

The state Senate committee that convened to study the impacts of seat belt usage heard testimony on Georgia’s current seat belt statute, the personal safety and medical cost implications of being properly restrained in passenger vehicles, and the failure to use seat belts being admissible evidence in civil cases over the last several months. The committee, officially named ‘The Senate Study Committee on Passenger Vehicle Seat Safety Belts,’ has since recommended that adult passengers in the back of a vehicle be added to the list of people who must wear a seat belt when a vehicle is in motion.

Under current law, Georgia drivers, front seat passengers, and children under the age of 17 who are riding in the back seat are required to buckle up. The Peach State joins nineteen others in not regulating what adults do in the back seat.

The committee is also recommending that juries on civil trials be permitted to consider whether or not a person was wearing a seat belt when assessing comparative fault.

The committee was authorized by the passage of Senate Resolution 366. The Chairman of the Senate Public Safety Committee – John Albers – also chaired this committee, which Senators Tonya Anderson, Bill Cowsert, Donzella James, and Chuck Payne served on after being appointed by Lieutenant Governor Geoff Duncan. Among those who testified before the committee:

Albers has said the legislation “will save lives.”

The Georgia legislature convenes the second week of January for the 2020 session. You can read the complete study committee report below.