Secretary of State’s Office Opens its Doors to Accessibility Community

Senior members of Secretary of State Brad Raffensperger’s staff hosted a roundtable discussion Friday with advocates for people with disabilities and senior citizens. 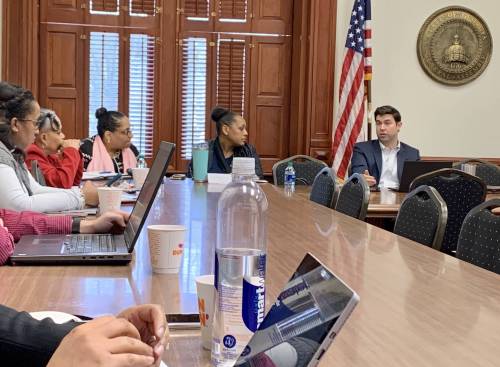 Senior members of Secretary of State Brad Raffensperger’s staff hosted a roundtable discussion Friday with advocates for people with disabilities and senior citizens.

“This is personal for me that we get out and serve people with differing abilities,” said State Elections Director Chris Harvey, who told the group his mother suffered disabilities as he was growing up.

The groups represented included the National Federation of the Blind, AARP, the American Civil Liberties Union Georgia, the Georgia Council on Aging, the Georgia Tech Center for Inclusive Design and Innovation, the Georgia Vocational Rehabilitation Agency and the State ADA Coordinator.

The new secure paper-ballot voting system Georgia has switched to offers greater accessibility and adaptability. Anyone can increase the size of lettering and the contrast on the touchscreens, and those requesting assistance can use an adaptive technology interface. It is like a video-game controller that reads the options to the blind and allows a sip-and-puff control for people with limited mobility.

Harvey noted that the system can be modified based on feedback from voters and discussions with advocates. For example, the State Elections Board is considering a rule that would allow the blind to use a cellphone app to read their paper ballot to them so they can verify their choices before casting the ballot.

“That’s something I didn’t know was a problem until I did a demonstration in Augusta,” he said. “They showed me how they do it on their phone, and I said, ‘that’s great.’”

Kevin Rayburn, deputy elections director and associate general counsel, asked the group for advice on wording the rule so that it is clear and meaningful to the disabilities community.

Harvey reminded the group that any voter can ask for assistance when they check in at their polling place so that they can use the adaptive technology.

“I’m excited to hear that people will be able to use their devices,” said John Rempel from Center for Inclusive Design and Innovation (CIDI) at Georgia Tech.

A new state law allows people needing assistance to bring someone with them to the polls – as long as it’s not their employer, union representative, a candidate or candidate’s family member. And there is no longer a limit on how many people a person can assist.

Detailed information about the new voting system, how to use it and ways it adapts to the disabled is available on the SecureVoteGA.com website. And the Secure the Vote team of the Secretary of State’s Office is working with groups to educate voters about it.