Faith leaders from around the country are throwing their support behind the Democrats running for U.S. Senate in Georgia. 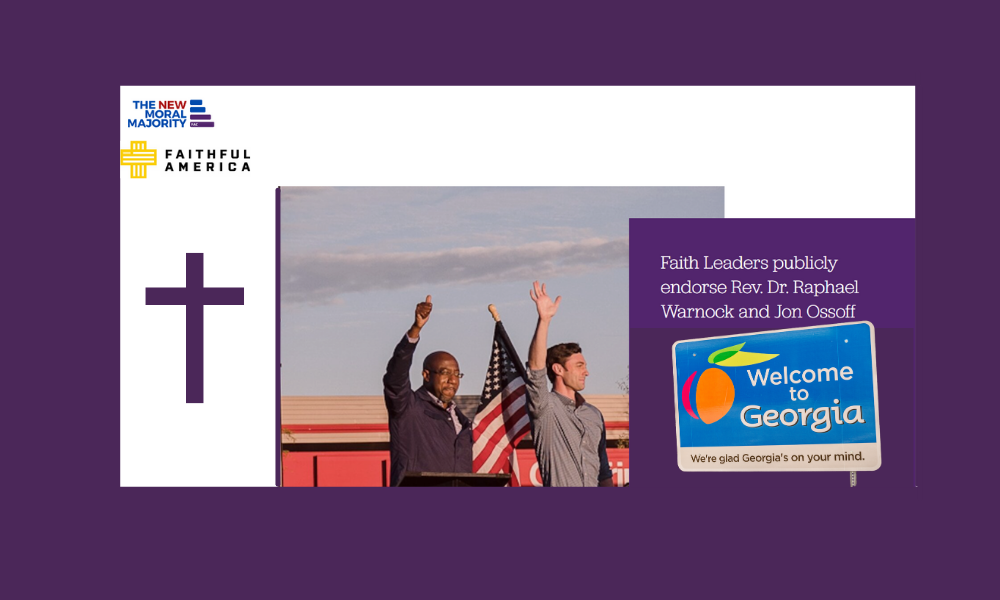 Faith leaders from around the country are throwing their support behind the Democrats running for U.S. Senate in Georgia.

The effort is led by New Moral Majority, which is a political action committee (PAC) and Faithful America – both of which drafted the letter of endorsement. Last week, more than 775 faith leaders signed on to an endorsement of Raphael Warnock and Jon Ossoff. Over 775 faith leaders signed on to endorse Rev. Raphael Warnock and Jon Ossoff in the U.S. Senate Election.

This unprecedented action shows the commitment of faith leaders to elect political leaders who will enact legislation for the good of all – to work for human decency, ensure the economic well-being of all citizens and advance the common good. Throughout their campaigns, Kelly Loeffler and David Perdue have relentlessly attacked the faith and character of both Rev. Dr. Warnock and Ossoff. Faith leaders are speaking up to support the historic nominations of Rev. Dr. Warnock and Ossoff as candidates who lead with hope instead of fear, love instead of hate, and unity instead of division.

“It is significant that religious leaders are stepping forward to say it is time to heal our land and  move forward in this county with more unity of purpose and spirit. It has been too long that we are divided by race, religion and ethnicity. The time has come to take significant steps to bring justice and equity to all in our country. We need to welcome the stranger, love our neighbor and stand up for those most vulnerable by electing moral leaders like Rev. Dr. Raphael Warnock and Jon Ossoff.”-Rev. Dr. David Key, Sr., Founding Pastor, Lake Oconee Community Church, Greensboro, GA

“Rev. Dr. Raphael Warnock, a native son of Savannah, pastor of the historic Ebenezer Baptist Church and a spiritual descendant of the Rev. Dr. Martin Luther King, Jr., and Jon Ossoff, a young, energetic Jewish filmmaker, have centered their campaigns on the values of unity, justice, and healing. We want folks to know that we’re behind them in their cause to mount a historic upset against two wealthy politicians with deeply rooted familial names who haven’t shown much compassion for those we’re called by scripture to support.” – Rev. Ryan M. Eller, Co-Founder and Executive Director of New Moral Majority

“At its best, our faith critiques broken systems and serves wounded people. In the hands of cynical politicians, it does the opposite. Faithful America’s members are showing that faith informs the values of progressives and conservatives alike. This diverse group of faith leaders endorsing a new progressive vision is a witness to the hunger for changes that will benefit the least of these among us.” – Rev. Colin Holtz, Faithful America Board president, Atlanta, GA

Neither group is formally affiliated with the Warnock or Ossoff campaigns.