As of Thursday, more than 1 million voters have requested absentee ballots, and 700,000 ballots have already been sent. 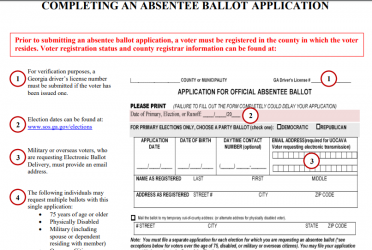 “Our goal was to keep voters safe and take the pressure off of our in-person voting locations,” Raffensperger said Thursday in a Capitol news conference. “We have more than achieved that goal.”

Raffensperger took steps in response to the COVID-19 infection designed to protect voters and poll workers, including using his authority to delay the primary election to June 9 and to mail absentee-ballot applications to 6.9 million active registered voters.

He applauded voters for following his lead to vote absentee, most for the first time.

He also thanked the county election offices, state Elections Division staff and vendors Dominion Voting Systems, Runbeck Election Services, and RR Donnelly for quick action in gearing up for the record-breaking volume of absentee voters. Other states have taken years to prepare for changing a significant portion of their votes to mail-in ballots.

“My office redesigned the absentee ballot application, worked with RR Donnelly to get them produced as a self-mailer, and from the day we announced the plan to send 6.9 million absentee applications to voters, to the first ones being mailed was just 6 days,” he said. “It was pretty amazing coordination.”

As of Thursday, more than 1 million voters have requested absentee ballots, and 700,000 ballots have already been sent.

In 2016, Georgia’s last statewide general primary in a presidential election year, just 37,231 absentee ballots were cast. The number of absentee ballot requests is already more than 30 times that and growing.