School Board Member Lies Under Oath About AllOnGeorgia

During proceedings for the recall petition hearing for Chattanooga County Board of Education Chairman John Agnew, another board member testifying under oath on his behalf appeared to offer false testimony on a series of events related to the recall. 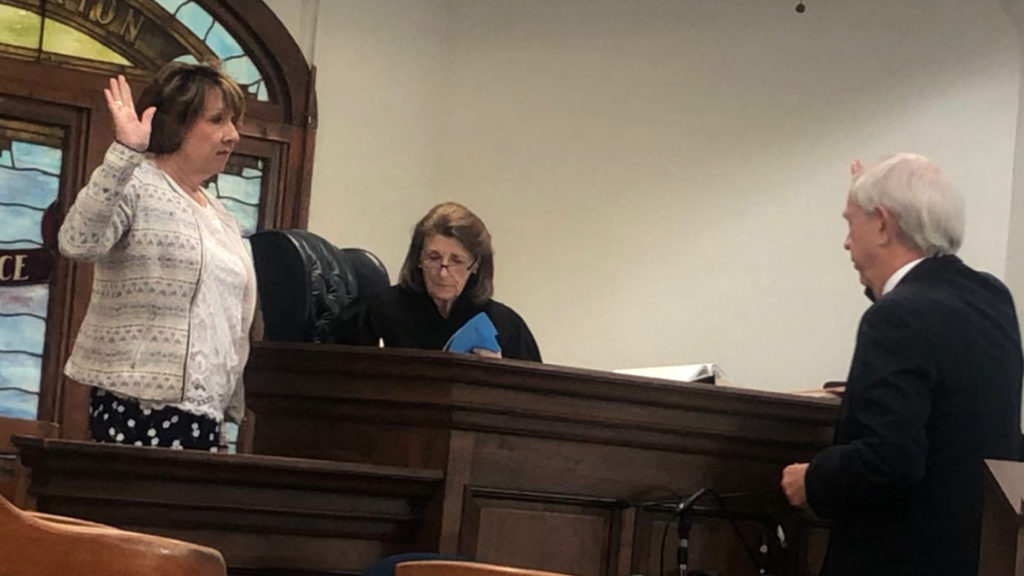 During proceedings for the recall petition hearing for Chattooga County Board of Education Chairman John Agnew, another board member testifying under oath on his behalf appeared to offer false testimony on a series of events related to the recall.

The Superior Courtroom in Summerville had a number of spectators Tuesday morning for the hearing as Cobb County Superior Court Judge Adele Grubbs presided over the hearing to avoid any conflicts of interest. Attorney Justin O’Dell was present representing Alan Baggett, Chairman of the recall committee, and Floyd County Attorney C. King Askew represented Agnew.

A point of contention for those behind the recall is that, among other things, the school board’s decision to switch from a 4-day school week to a 5-day school week immediately after being sworn in at the first meeting of the year. Of a related matter, citizens wishing to address the school board in public in meetings must sign up at least 5 days ahead of the meeting, but agendas are not made available until just ahead of the meeting, which citizens contend does not allow them the opportunity to voice concerns about proposed changes to policies and practices. The issue has moved to the forefront as the Board has sought to further limit public comments at meetings by revising the public participation policy.

This process by the Chattooga Board of Education sparked a line of questioning in the proceedings Tuesday as it relates to the recall because supporters of the recall say the school board, specifically in the instance of the vote to change the school week, did not give a reasonable amount of public notice.

Chattooga County School Board member Julia Houston took the stand as a witness in support of Agnew Tuesday. Askew specifically questioned Houston about the process ahead of the meeting, which took place on Thursday, January 17, 2019, and the agenda release notifying the public that the measure would be up for consideration.

Agnew’s attorney asked Houston if she had knowledge of when the agenda for the January 17th meeting was published as he outlined that the public, did in fact, have ample time to know that the agenda item would be discussed.

Houston testified, “This particular agenda was released to AllOnGeorgia at least a week prior to the meeting.” She then goes on to testify that she “saw it” on the news site.

You can see her testimony of that in this 2-minute video:

But a review of the facts and timeline of events indicates that the statement is verifiably false.

The dashboard that tracks publishing and revision times of articles on AllOnGeorgia shows that the meeting agenda was not published on AllOnGeorgia-Chattooga until 5:02 p.m on January 16th.

That is evidenced in the picture below. The article is also available with the initial publishing date here.

Additionally, the lack of publishing “at least a week before” the school board meeting was not a result of a delay by AllOnGeorgia.

Records released by the school district on Tuesday indicate that the agenda for the meeting in January was published at 4:52 pm on January 16th, some 25 hours ahead of the first meeting of the year.

The photo of the school system’s website dashboard is below.

Georgia law provides a definition of perjury in OCGA 16-10-70(a) as “A person to whom a lawful oath or affirmation has been administered commits the offense of perjury when, in a judicial proceeding, he knowingly and willfully makes a false statement material to the issue or point in question.”

AllOnGeorgia was present for the hearing Tuesday as credential media. Upon learning of the misstatements by Houston, AllOnGeorgia’s Casie Bryant was then called to the stand by ODell to testify to the timeline of the release of the agenda.

Also of note, the decision to address the number of school days each week at the first meeting occurred at the direction of Houston. Emails from Houston to the the former Superintendent and fellow school Board members indicate that Houston requested the item be placed on the agenda on January 2nd, before she was ever sworn into office.

Her email is below.

Additionally, it is a deviation from the normal practice to have a school board member who has not even been sworn in yet to instruct school system employees to place items on the agenda. Procedurally, the first meeting involves the swearing in of new elected officials and a meeting guided by the superintendent and items placed by board members whose terms were not impacted by the election. Her commentary that the voters had spoken only referred to the election results for board members. The school day week had not previously been up for consideration.

Judge Grubbs is expected to render a decision on the case later this week.

The full video of the hearing is available on the AllOnGeorgia-Chattooga Facebook page. It will be published on YouTube shortly.