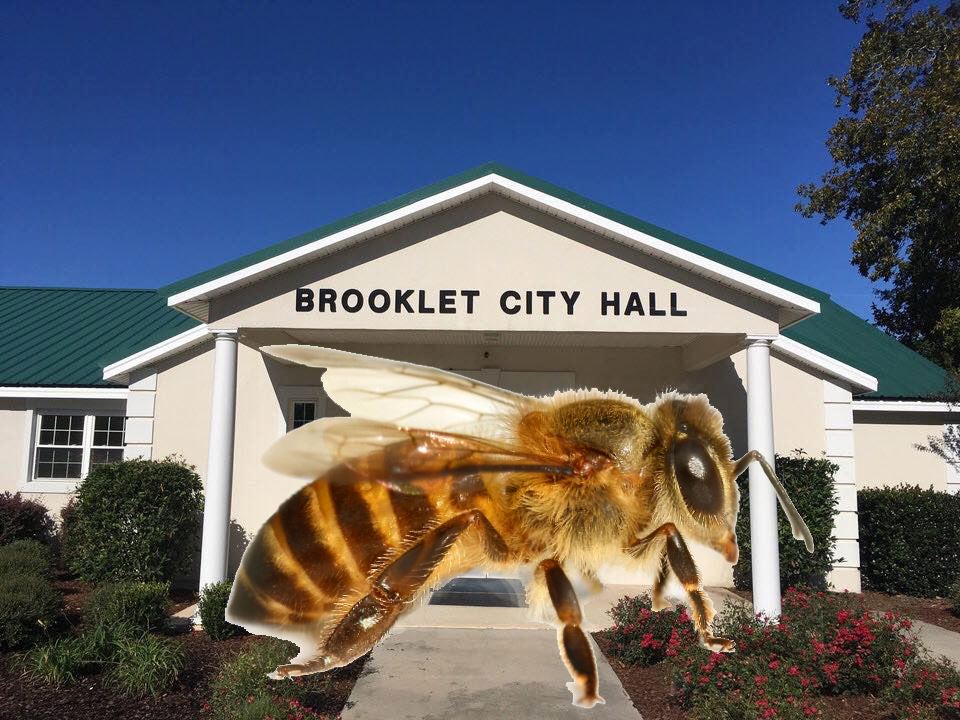 The Bees’ Knees is a home-based business for hive placement located inside the city limits of Brooklet. Owned by the DiNello family, the beehives have been pollinating the area – and most of Brooklet – since 2016. The DiNello’s neighbors say they appreciate the benefits the bees offer the area, and council members have been aware of the hive placement since he project began. One neighbor has even allowed the DiNellos to place hives on an empty lot a few blocks down, citing considerable benefits to the gardens, backyard gardens, and the honeybee population overall. Roughly 10 adjacent and nearby neighbors have signed a petition in support of the beekeeping by the DiNellos.

The Georgia Beekeepers Association opposes the use of certain pesticides near honeybees and penned a letter to the Georgia Municipal Association, encouraging cities to first locate honeybee hives before spraying. The DiNellos have only requested a 42-foot distance in the city not be sprayed due to the close proximity of the bees on the other side of their privacy fence which is roughly 10 feet from the road, as shown in this brief video on their Facebook page.

In recent years, as the city prepares for the mosquito spraying service in the summer months, the city has allowed the DiNellos to opt-out of the spray over concerns for the impacts on the bees, but this year, the city said no exceptions would be made.

When DiNello again requested that the city not spray his property or the vacant lot owned by his neighbor because it could kill the bees, he received a letter saying the opt-out would not be granted and spraying would begin soon. DiNello then posted about the exchange on social media, which is when he was served with a letter by the City ordering him to remove his bees from his property and the vacant lot within 30 days or face a financial penalty.

City attorney Hugh Hunter sent the letter on behalf of the City on May 8th, documents posted on social media show. Hunter said in the letter that the beekeeping is:

“a non-permitted use of property in an R-1 zoning district, which is the City’s most restrictive residential district. Specifically, you are engaged in beekeeping on [address] and a nearby vacant field, which operation is a commercial enterprise, from which honest is derived and is being sold. It is also agricultural in nature. Such use is not a permitted use in an R-1 zoning district, and you are therefore in violation of the ordinance.”

That is where the matter is interpreted differently by other parties, though.

The definition of ‘agriculture’ under Georgia law does include beekeeping, but it also includes the growing of crops. Exceptions are made for agriculture initiatives that are just hobbies. Fewer than half of the DiNello’s 40 hives are inside the city limits of Brooklet. By the definition offered in the letter by the City of Brooklet, a person could not even grow a garden in their backyard because of zoning regulations Hunter cited. The Georgia Department of Agriculture, on its website, suggests that beekeepers check to make sure the local ordinances do not prohibit beekeeping or limit the number of hives that can be placed.

State law concedes that local zoning laws cannot be overruled by OCGA 2-14-41.1, however, the Georgia Department of Agriculture’s interpretation and accepted definition of the statute says that “local zoning boards are still able to adopt ordinances that may limit beekeeping to lots that have a minimum square footage or are away from schools, etc.” It makes no mention of prohibition on the premise of zoning classifications like ‘residential,’ ‘commercial,’ or ‘agricultural.’

The Department of Agriculture says that OCGA 2-1-6 further protects beekeeping in stating, “No county, municipality, consolidated government, or other political subdivision of this state shall adopt or enforce any ordinance, rule, regulation, or resolution regulating crop management or animal husbandry practices involved in the production of agricultural or farm products on any private property.” (emphasis added)

As for the “commercial enterprise” aspect, the DiNellos are in the business of hive placement – a service much like landscaping where the business is essentially conducted on the property of the consumer, not at The Bees’ Knees. [The Facebook page and website both classify the company as a ‘service’] While the company is a Limited Liability Corporation (LLC) as prescribed by the state of Georgia, the home address for the DiNellos is only listed because a physical address is required by the Georgia Secretary of State. No person comes to the DiNello home (or vacant lot) for any reason.

Additionally, the honey is not processed at or sold from the home inside Brooklet city limits. The DiNellos have a honey house not far from town where the honey is spun and packaged. Their website directs customers to a specific list of retailers to purchase honey. The only component of the business that is inside city limits is the beekeeping, a practice that cannot be banned by local governments under Georgia law. See OCGA 2-14-41.1.

The DiNellos argue that the bees kept on their property in Brooklet are not of a commercial magnitude. Between their own property and the vacant lot, the DiNellos have just 15 hives.

And then, of course, there is the practice of enforcing the code equally. At least two other families inside the Brooklet City limits also keep bees on their property but have not heard from the city attorney or been told to stop keeping bees. In addition, the City has also failed to cite other home-based businesses where a service is offered off-site but the LLC is registered to the city address. Preliminary searches yield results of a landscaping, child care services, a writer, and a house cleaning service all registered to home addresses in Brooklet. As of Monday, May 13th, they had not been cited.

Most of the commentary on the social media posts by The Bees’ Knees was in support of the beekeeping, including beekeepers in neighboring counties and city officials in other places who were concerned about Brooklet using a zoning ordinance to prohibit a practice that is not prohibited elsewhere in the code of ordinances.

Honeybees have been the subject of headlines at the state and national levels in recent years as scientists worry about the declining population. Bees assist with the pollination of flowers, vegetable, and fruits because they transport pollen from plant to plant as they collect nectar to bring to their hives. Bees are so important to crops and flowers that commercial farms often contract with beekeepers to assist in pollination to increase yields. In Georgia, the official state insect is the honeybee.

DiNello and other residents plan to attend the May council meeting to plead their case before Council. It is scheduled for Thursday, May 16th at 7:00 PM at City Hall. The meeting is open to the public and those wishing to address council May contact City hall ahead of the meeting or sign-up at the time of the meeting.

A Change.org petition has also been created and as of lunch time on Monday, it had almost 500 signature. It’s available here.