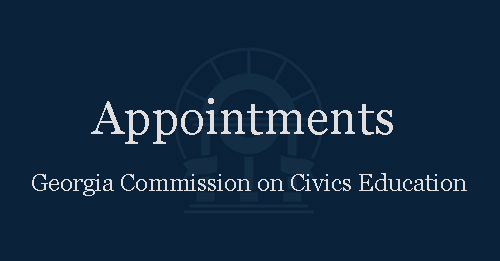 Created by Senate Bill 220, which Governor Kemp signed in April of this year, the Commission promotes and enhances the education of students on the importance of civic engagement and public service, the study of state and local government, and collaboration among organizations in the state that conduct civics education.

The Commission is comprised of 17 members, with four appointed by the governor. The remaining 13 members come from various organizations, including appointments from the Speaker of the House and the President of the Senate, a justice of the Georgia Supreme Court, the Attorney General, the State School Superintendent, representatives from the Georgia Chamber of Commerce and Metro Atlanta Chamber of Commerce, and representatives from the Association County Commissioners of Georgia and the Georgia Municipal Association.

In addition to these appointments, Governor Kemp issued a proclamation recognizing October 2022 as Civics Awareness Month to highlight the importance of teaching our next generation about the proud history and government structure of Georgia and the United States of America.

Wes Cantrell was elected to the Georgia General Assembly in 2014. Cantrell currently represents House District 22 and was assigned to the following committees: Education; Appropriations; Energy, Utilities, and Telecommunications; Information and Audits; Juvenile Justice; and Small Business Development. He is the discipleship pastor at First Baptist Church of Woodstock and sits on the Board of Directors for the King’s Academy in Woodstock. He and his wife, Jane, were one of the three founding families of The King’s Academy in 1999. They have three children and reside in Cherokee County.

Kurt Doehrman currently teaches Economics and serves as the Offensive Coordinator and Assistant Head Coach of the football team at North Oconee High School. Doehrman previously taught at Parkview High School, where he taught social studies while coaching football and baseball. He graduated from the University of Georgia with a bachelor’s degree in Social Studies Education and from Kennesaw State University with a master’s degree in Instructional Technology. He and his wife, Taylor, have a son and live in downtown Watkinsville.

Judy Teasley is a retired middle and high school social studies (American Government) teacher. She spent her career working in schools in Warren, Washington, and Columbia Counties. Teasley sponsored student council organizations, coached, served as an athletic director, and more during her time as an educator. She earned her master’s and education specialist degrees from Augusta State University in Educational Leadership. She now serves on the Columbia County Board of Education as the District 3 representative. Teasley and her husband, John, live in Evans where they enjoy spending time in their community and participating in service opportunities.

Randell Trammell has long been involved in youth development and holds an undergraduate degree in Religious Education as well as an MBA from Reinhardt University. In 2014, he completed his Doctorate in Education with an emphasis in organizational leadership and communication. After seeing a dire need for resources and support in the area of civics education in Georgia, Trammell developed the concept of the Georgia Center for Civic Engagement. In 2017, Trammell officially launched the Center as a 501(c)(3) nonprofit. In October 2021, he was recognized as one of Georgia Trend Magazine‘s “40 Under 40” for his contributions to civics education.