Is the Ga Constitution Being Violated with New Voter Registrations for January Runoff?

As Trump campaign attorney Lin Wood tweeted that the Georgia Secretary of State was ‘blatantly violating’ the Georgia Constitution – specifically a clause that prohibits voting in runoff elections if the voter was not registered ‘and eligible’ in the general election – many Georgians are asking what the law really says and how does that come into play for January 5th.
AllOnGeorgia explains –> 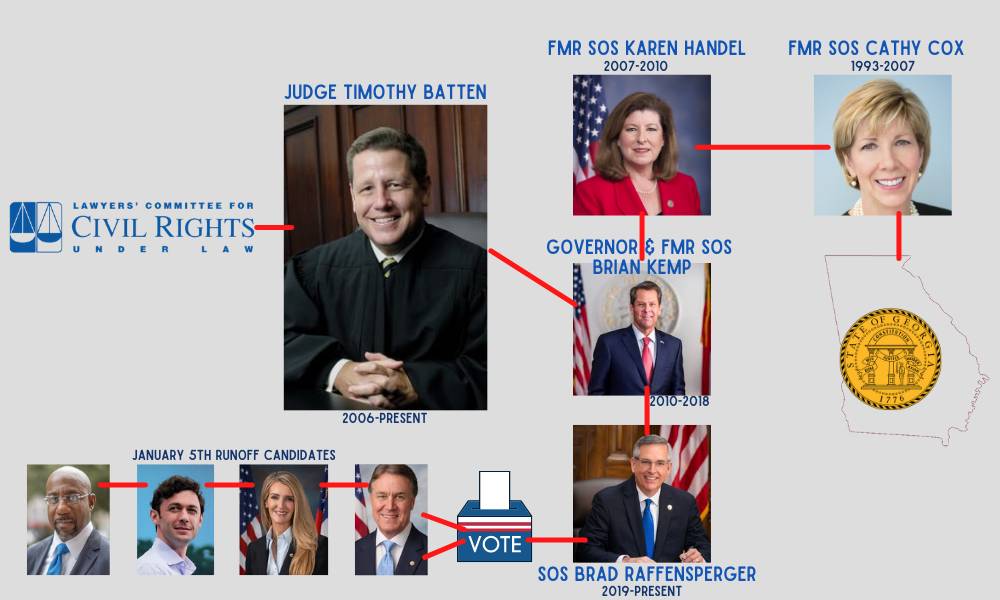 The Georgia Secretary of State’s Office reported last week that nearly 76,000 new voters registered between the November 3, 2020 election and the voter registration deadline on December 7, 2020.

The latest numbers were released as Trump campaign attorney Lin Wood tweeted that the Georgia Secretary of State was ‘blatantly violating’ the Georgia Constitution and specifically a clause that prohibits voting in runoff elections if the voter was not registered ‘and eligible’ in the general election. 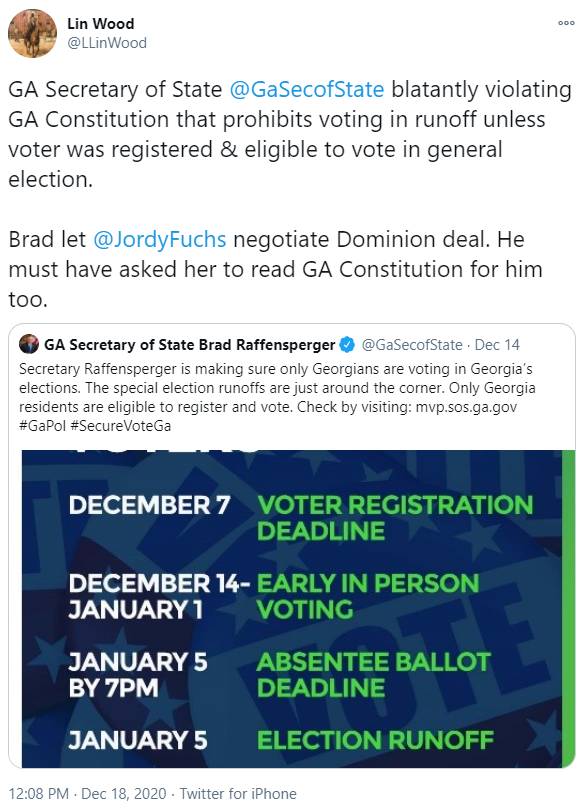 So, where does the true lie?

The explanation can be found in the Constitution, state statute, and a Consent Decree signed as part of a judicial order in 2017.

This specific Section of Article II has gone viral among Republicans in particular in the wake of the certification of Georgia’s election results in favor of Joe Biden.

But there is more in play here. A settlement from 2017 following a suit by the The Lawyers’ Committee for Civil Rights Under Law (representing the Georgia State Conference of the NAACP, the Georgia Coalition for the Peoples’ Agenda, ProGeorgia State Table, Third Sector Development, and Asian Americans Advancing Justice – Atlanta) against the state of Georgia is what led the state to stop enforcing Article II, Section II, Paragraph II of the Constitution as it pertains to federal elections.

Previously, a ‘blackout period’ for voter registration was in place between an election and a runoff election.

The lawsuit filed in April 2017 alleged that Georgia’s practice of cutting off voter registration for federal run-off elections two months earlier than guaranteed was a violation of federal law, particularly Section 8 of the National Voter Registration Act of 1993 [52 USC 20507(a)(1)].

At the time, then-Secretary of State Brian Kemp’s legal counsel, David Dove, told the AJC that the law had been in place since the tenure of Secretary of State Cathy Cox and that the office planned to fight it in court. Cox was a Democrat Secretary of State who held office from 1999 to 2007. Kemp’s office called the lawsuit an attack that was ‘completely political.’

On October 13, 2017, a Consent Decree was signed in the U.S. District Court for the Northern District of Georgia after U.S. District Judge Timothy Batten (a Bush appointee) ruled that against the state. It dismissed ‘the State of Georgia’ from the suit and ordered the Secretary of State’s Office to stop enforcing the aforementioned section of the state Constitution and any similar state statute. In short, the Consent Decree stated that Georgia cannot prescribe a voter registration deadline in any federal election, “including all future federal runoffs, that is longer than the deadline provided under state law and in no case longer than 30 days before an election.” The signing of the order by Kemp, in his capacity as Secretary of State, was an agreement that he would adhere to the order from the judge and the Plaintiffs – The Lawyers’ Committee for Civil Rights Under Law – claimed victory, as did the Georgia NAACP.

Because the January 5th runoff includes two federal races, the legal settlement – which overrides the state Constitution – applies and the voter registration deadline was appropriately set for December 7, 2020.

Technically, the State of Georgia could enforce this Constitutional delineation for the state races on the ballot on January 5th, particularly the Public Service Commission race. The state would then have two ballots – one with federal races and one with state-level races, which would be accompanied by an increase in cost, and persons who registered after November 3, 2020 would only be able to cast a ballot in the Senate races.

If you will recall, the Public Service Commission race was initially slated for December but was moved to January to take place at the same time as the Senate runoffs. Raffensperger, who made the decision, citing a savings to taxpayers and overburdened election workers who were – at the time – working on election audits and recounts.

No person registers with a political party in the State of Georgia so there are no ‘registered Republicans’ or ‘registered Democrats’ as is the case in many other states.

There is no requirement to have voted in the presidential preference primary and/or the primary election in order to vote in the General Election, which is always held in November.