Worried about not understanding the ballot questions when you head to the polls this November?
Don’t worry, we’ve got you covered! 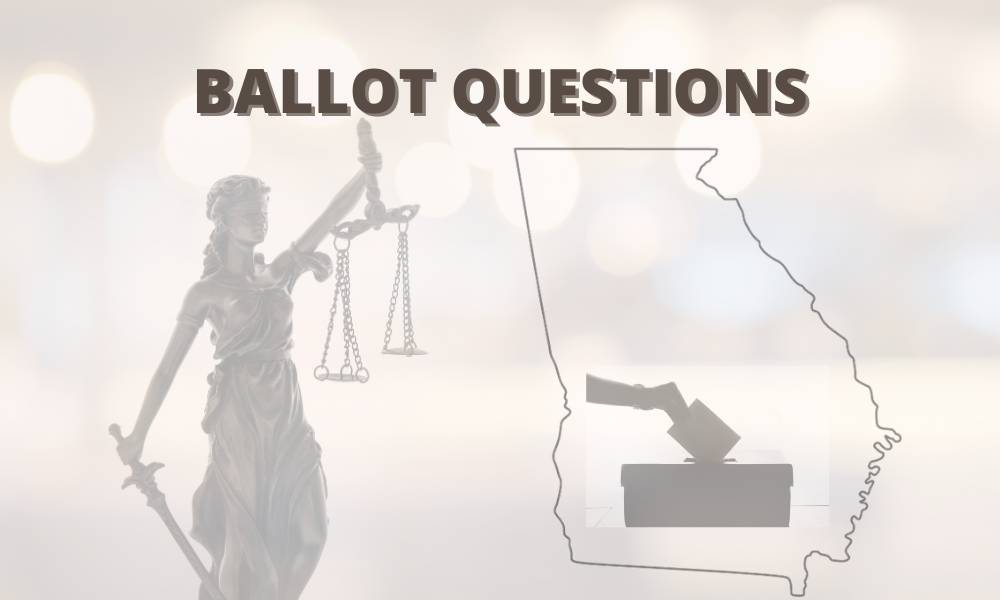 3 questions will appear on every ballot – absentee or in-person – this November as Georgians cast their votes for everything from President and U.S. Senate to General Assembly seats and county commissioner.

There are two Constitutional Amendments, which will alter the state constitution and are considered more ‘permanent’ because, in the event that there is a desire to repeal or change it, another statewide vote by voters would be necessary.

There is also one ballot referendum, which is a binding Act but does not entail a revision to the Georgia Constitution.

Both types of questions were placed on the ballot following a vote by the Georgia legislature and the signature of Governor Kemp and both require approval by a majority of Georgia voters in order to take effect. You may find other questions on your ballot, but those would be local or regional questions, not ones for consideration across the state.

You do not have to answer the ballot questions if you’re not sure how to answer, but hopefully you’ll have a better idea of what to expect after this article.

AMENDMENT 1: Controlling How Government Spends the Money It Collects Via Fees

Amends Article III, Section IX, Paragraph VI of the Georgia Constitution and subsequently authorizes the Georgia Legislature to re-dedicate tax or fee revenue to the public purpose for which the taxes or fees were imposed

Shall the Constitution of Georgia be amended so as to authorize the General Assembly to dedicate revenues derived from fees or taxes to the public purpose for which such fees or taxes were intended?

This is likely the most mundane constitutional amendment we have had in recent years, mostly because, if approved, it would require the state to do something it is supposed to have been doing for decades.

In Georgia, the legislature has approved a number of fees and taxes for ‘specific purposes’ that are added on different revenue streams, but the state has not been allocating the funds to special purpose accounts, instead depositing the money into the General Fund for discretionary spending on just about anything.

Specifically, the Solid Waste Trust Fund, which receives funds from tire dumping, was found in 2015 to be absent of $2.8 million in appropriated funds.

If approved, this constitutional amendment would require specific purposes to be defined when the fee is approved by the legislature and would automatically sunset the fee out of existence after 10 years unless it was renewed by the legislature, which does usually happen. The agencies collecting the funds would also be required to produce annual reports on revenue and expenditures.

The measure would also prohibit ‘amending’ the dedicated purpose for spending unless approved by ⅔ of the Georgia House and ⅔ of the Georgia Senate (though they can still repeal the fee without a majority) and the Governor can reassign the fund direction in certain financial emergencies, but not indefinitely.

VOTE YES: If you support the amendment and believe that fees and add-on taxes assessed by the state should be directed where they are allocated when approved by the legislature, instead of depositing into the General Fund.

VOTE NO: If you do not care how the state spends the money collected by way of fees and add-on taxes.

AMENDMENT 2: Sovereign Immunity and How We Sue the Government

Amends Article I, Section II, Paragraph V of the Georgia Constitution by rendering the current text subparagraph (a) and adding a new subparagraph (b)

This may sound like a term you’ve heard quite a bit lately -qualified immunity- but it is slightly different. Sovereign immunity a legal doctrine in which it is held that the government cannot be sued without its express consent. It sounds complicated, but the good news is that it is not.

The General Assembly overwhelmingly approved this measure in 2019, but it was vetoed by Governor Kemp. The bill sponsors returned in 2020 and instead of making it ‘a legislature thing,’ they made it ‘a constitutional amendment thing,’ which means we must decide.

CURRENT LAW: You believe a local ordinance that grants local government officials the authority to enter your home to make sure you have no more than 4 dogs inside is ‘unconstitutional.’ You want to file a lawsuit against the city to stop them from enforcing it, based on the 4th Amendment, but you must first get the permission of the city. Since the city passed the ordinance, they say ‘No’ to the legal battle. Your legal battle is now complete.

IF AMENDMENT IS PASSED: You believe the ordinance is unconstitutional, so you sue them to stop it from being enforced. A Superior Court judge in your county or judicial circuit will hear the case and decide for you.

This is important because often times, the only other remedy for someone to sue local and state officials is in federal court, which presents a host of other issues.

The ability to sue would include the State of Georgia, its departments, all agencies, and local governments.

If you’re worried about the state or its actors having to fork out tons of money, worry not. While legal fees could be awarded in very specific cases determined at a later date by the General Assembly, this Amendment would not otherwise open the floodgates for monetary damages. Instead, it’s about stopping the constitutional violation. A judge would merely order the government to stop the bad act, if he/she ruled in favor of the individual.

Because this is the effective repeal of ‘sovereign immunity’ and does not address ‘qualified immunity,’ the amendment would not change anything about how state or public officers and employees are sued. The Superior Court would still dismiss a case brought against an individual.

State Representative and bill sponsor Andy Welch told WABE: “It was only five years ago that you could bring suit against a local government or the state government to enjoin an unconstitutional action. The Supreme Court has rendered decisions that have changed that. And thus, it is for our responsibility as legislators to put before the people a check on that judicial decision.”

If voters approve this measure, it will take effect on January 1, 2021.

VOTE YES: If you want individuals to be able to sue local and/or state agencies in their local Superior Court for alleged constitutional violations.

VOTE NO: If you want the government to bar individuals from filing lawsuits against the same government if the individual believes a rule or law is unconstitutional.

This ballot referendum alters OCGA 48-5-41 of the Official Code of Georgia Annotated by adding a new paragraph to the code section that address ad valorem taxes for real property owned by a purely public charity.

Shall the Act be approved which provides an exemption from ad valorem taxes for all real property owned by a purely public charity, if such charity is exempt from taxation under Section 501(c)(3) of the federal Internal Revenue Code and such real property is held exclusively for the purpose of building or repairing single-family homes to be financed by such charity to individuals using loans that shall not bear interest?

This only applies if the charity is ALSO exempt from federal taxation AND the property is being used only for building or repairing single-family homes to be financed by the charity to individuals using zero-interest loans.

A prime example would be Habitat for Humanity.

If approved by voters, the new act would take effect on January 1, 2021 – meaning the 2021 tax year would be included, but would not be reflected until 2022.

VOTE YES: If you support the new exemption for ad valorem taxes on real property that is owned by a purely public charity.

VOTE NO: If you do not support an additional exemption for ad valorem taxes on real property that is owned by a purely public charity.